Four technical pillars for Sharjah Club have emerged that will support its important confrontation against Al Hilal Saudi Arabia in Riyadh, tomorrow, Friday, at the start of its campaign in the first group of the AFC Champions League for football 2022, and the group also includes Al Rayyan Qatar and Istiklal Dushanbe from Tajikistan. 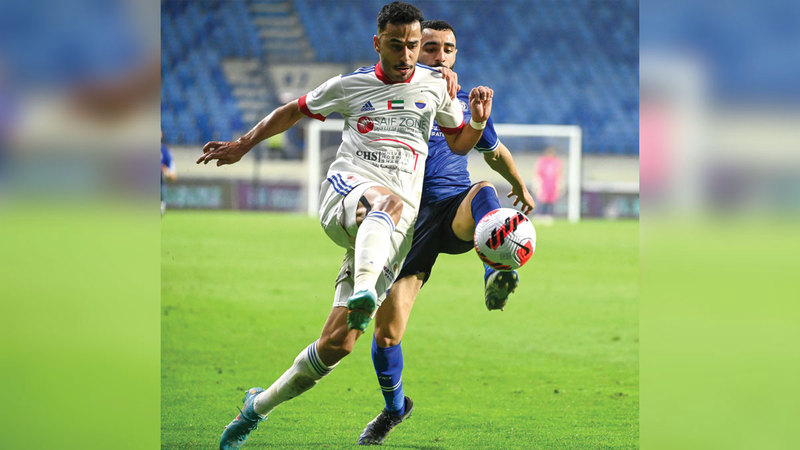 Ahmed Mubarak: “The King” is ready to participate.. I wish success to Al Jazeera and Al-Ahly youth as well

Four technical pillars for Sharjah Club have emerged that will support its important confrontation against Al Hilal Saudi Arabia in Riyadh, tomorrow, Friday, at the start of its campaign in the first group of the AFC Champions League for football 2022. The group also includes Al Rayyan of Qatar and Istiklal of Dushanbe from Tajikistan.

At the top of these pillars are the five victories so far in the second round of the league, qualifying for the final match in the President's Cup against Al Wahda, overcoming the Iraqi Al-Zawraa obstacle in the Asian playoff, as well as beating Al-Nasr with two clean goals in the 20th round of the league.

The team manager, Ahmed Mubarak Al-Junaibi, confirmed the readiness of the Al-Sharqawi team for the upcoming meeting, noting that the technical staff led by Romanian coach Cosmin chose 26 players for the Asian mission, including the eight foreign and resident players, to choose four of them to play the match, pointing out that there will be options Several in front of the coach through the six matches of the team in the tournament.

Ahmed Mubarak told "Emirates Today": "The players played a great match against Al-Nasr in the league, and the victory they achieved will be a boost for the team's players to arm themselves with it during the Asian Championship."

He added, "I also wish success for Al-Ahly Youth Club and Al-Jazira, and the state's representation in the Asian Championship."

Ahmed Mubarak indicated that he also wishes success for the Saudi and Asian Football Associations in organizing this tournament.

Reaching the quarter-finals of the AFC Champions League in the 2004 edition is the most prominent achievement for Sharjah in this tournament, while the four technical pillars are:

Sharjah's march during the second round of the professional league, in particular, witnessed positive results, represented by five victories out of seven matches, while it drew negatively in one match against Al Wasl in the 16th round, and lost one match against Al Jazira in the 18th round. Sharjah beat Ittihad Kalba and Al Dhafra And the youth of Al-Ahly, Ajman and Al-Nasr.

2- Qualification for the President's Cup Final

During the last period, Sharjah succeeded in qualifying for the final match in the President's Cup, and will meet Al Wahda on May 11, after its victory over Al Wasl in the semi-finals.

3- Overcoming the obstacle of Al-Zawra

Sharjah rose to play in the group stage of the AFC Champions League, after overcoming the obstacle of the Iraqi Al-Zawraa in the preliminary round, by winning it with penalty kicks 7-6, after they tied in the original and extra time 1-1.

The last match between Sharjah and Al Nasr, in the 20th round in which the team won with two clean goals, represented the best preparation for the team before the upcoming matches in the AFC Champions League and the Al Hilal meeting, during which the technical staff, led by coach Cosmin, reassured the readiness of his players from all sides.

Barot: Al Hilal is a difficult number.. We have great confidence in Sharjah

The former Olympic team coach, Eid Barout, confirmed that although Sharjah begins his career in the Asian Championship against Al Hilal Saudi Arabia, which is a difficult number in Asia and an experienced team, and there are very big differences between Sharjah and Al Hilal, but they have great confidence in Sharjah players led by a great coach who knows the secrets of things , like Cosmin, stressing that things seem difficult for Sharjah in the absence of key players such as Shaheen Abdel Rahman and Abdullah Ghanem, along with Khaled Bawazeer, but that football is not impossible in it.

Barout told "Emirates Today": "The big problem facing Sharjah is the tournament system, as it plays in the UAE league with six foreign players, while it participates in the Asian Championship with four players, and this matter does not differentiate with Al Hilal because its main players in the team are reserves. with the team.

Barot stressed the importance of Sharjah benefiting from his previous experiences in the Asian Championship, and that the players must move forward in the tournament and go far in it, and not just participate in the honorary.