The administrator of the Sharjah Futsal Football Team, Faisal Abdullah, confirmed that the game is very popular among the public, and has finally gained distinguished media coverage after it was out of the spotlight in the past period, indicating that he is looking forward to winning the Mohammed bin Rashid Award for Sports Creativity in the category 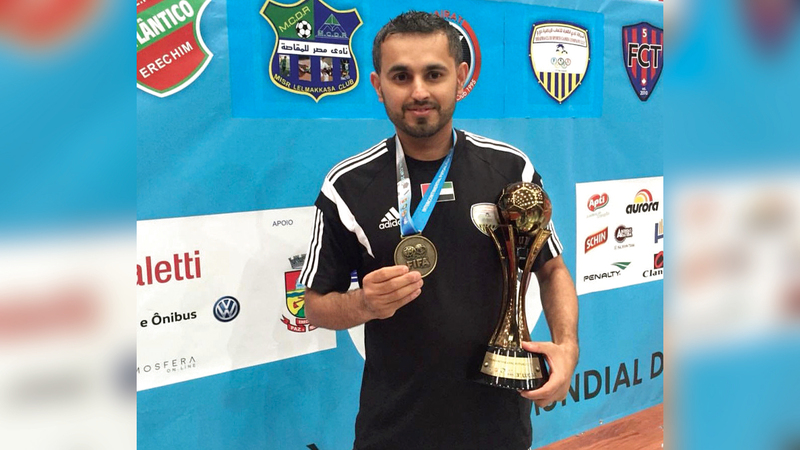 The administrator of the Sharjah Futsal Team, Faisal Abdullah, confirmed that the game is very popular among the public, and has finally gained distinguished media coverage after it was out of the spotlight in the past period, indicating that he is looking forward to winning the Mohammed bin Rashid Award for Sports Creativity in the administrative category, Through his celebration in 20 official championships he led.

Faisal Abdullah told "Emirates Today": "Futsal has good popularity, but it was somewhat far from media coverage, but today it enjoys distinguished support," noting that "he was working as a broadcaster at Dubai Sports Channel 2004-2011, and during this period he contributed Through his work to support the game in the media.

Faisal Abdullah is considered one of the most successful administrators with his team in futsal, through his celebration in 20 official tournaments in which he led the teams he supervised, whether he was team manager or administrator, in addition to seven Ramadan tournaments, and another was a manager of the national team when he won the Cup Malta International Championship.

Faisal Abdullah confirmed that the Nass tournaments and other tournaments held during the holy month of Ramadan, as they allowed foreigners, residents and teams coming from the country to participate, laid a strong foundation for the development of futsal sports in the early years of playing this game, coinciding with the important role of the Futsal Executive Committee until the game became more Popular and regulated nowadays.

Regarding the first championship he recorded in his personal record, he said, “It was in 2007 and I was at that time manager of the Al-Wasl club club. I have good relations with sports officials who have excelled in their work and have benefited from their administrative experiences to translate them into my administrative work, including Ahmed Nasser Al-Fardan, Marwan bin Bayat, Suwaidan Al-Naboodah, and Imran Abdullah, at the beginning of my administrative work, while I enjoy great support from the President of Sharjah Club, Ali Al-Midfa, and the head of the football company, Abdullah Al-Ajlah.

He added: "Friction is important for everyone, not just for the players, and it is not only technical, but also administrative," stressing that "the success of administrative work depends on several reasons, including: the sports work environment in the club, the compatibility between the club and team management, and the players' keenness to adhere, And not to be disappointed when the desired result is not achieved, and I have felt that for many years in Al Wasl and Al Dhafra and with Sharjah at the present time.”

He continued, "I am looking forward to running for the Mohammed bin Rashid Award for Sports Creativity whenever it applies to the specifications as an administrator who has achieved this number of titles with the teams he worked with locally and internationally, as I am very proud of winning the third place cup with Al Dhafra team in the World Club Championship that was held in Brazil." .