The organizing committee of the ninth edition of the "Nad Al Sheba Sports Tournament" has announced the end of preparations for organizing the tournament, which begins next Saturday, and includes eight sports: volleyball, padel tennis, wheelchair basketball, running, cycling, and 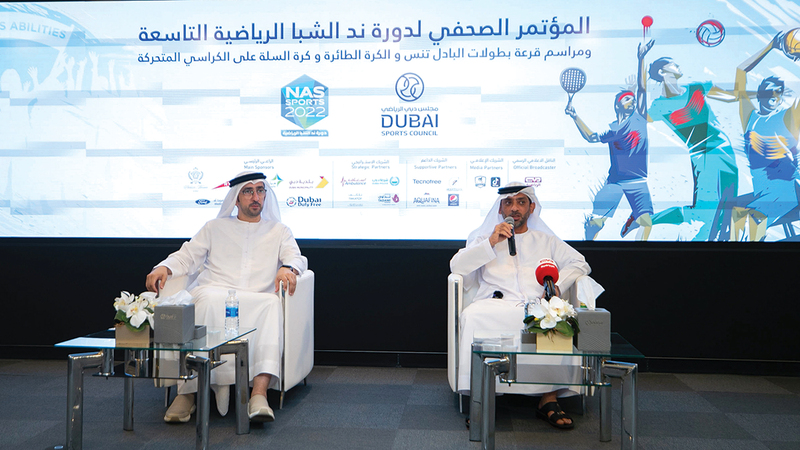 It kicks off Saturday... and its prizes amount to 3.5 million dirhams

The organizing committee of the ninth edition of the "Nad Al Sheba Sports Tournament" has announced the end of preparations for organizing the tournament's competitions, which start next Saturday, and include eight sports: volleyball, padel tennis, wheelchair basketball, running, cycling, jiu-jitsu, and arc. And the arrow and the Spartan Nas night race.

The organizing committee held a press conference yesterday, at the headquarters of the Dubai Sports Council, which was attended by the course director, Hassan Al Mazrouei, Chairman of the Technical Committee, Adel Al Bannai, Executive Director of the Dubai Club for People of Determination, Majid Al Osaimi, and managers and representatives of the participating teams.

Al Mazrouei stressed that the course, organized by the Dubai Sports Council, has become one of the most prominent sporting events that have a strong presence in the holy month of Ramadan, thanks to the directives and support of His Highness Sheikh Hamdan bin Mohammed bin Rashid Al Maktoum, Crown Prince of Dubai and Chairman of the Executive Council of the Government of Dubai, and it has become a milestone. On the agenda of sporting events, thanks to its various games, its wide popularity, and the value of its prizes, which will amount to 3.5 million dirhams, distributed across all sports.

He said, "The course has a wide public base, especially as it has social initiatives that have contributed to supporting sports activity in the country in general and Dubai in particular."

He added: "Thousands of athletes participated in the tournament in various sports that we are keen to have every year, and we are keen to give an opportunity to have new games in the tournament annually, and the tournament would not have been successful without the support of sponsors, sports federations and the Dubai Club for People of Determination, who contributed greatly to The success of the course and the achievement of its objectives.

Al Mazrouei concluded his statements by saying: The fans who will attend the Nad Al Sheba Tournament will expect many surprises, as daily raffles will be held and valuable prizes will be distributed to them.

For his part, Adel Al-Bannai said that the increase in the number of tournaments confirms the keenness of the organizing committee to support and develop various sports by organizing strong competitions that contribute to developing the level of our athletes and increasing their experiences, as well as attracting strong athletes who add a lot to the competitions and to our participating athletes.

Al-Bannai indicated that the cycling race will reach a distance of 77 kilometers this year, while the race for the elderly will extend for 40 kilometers, and for the people of determination 20 kilometers, while the running race competitions for all groups will start for distances of four, five and 10 kilometers from the starting and finishing point at the horse track in Maidan. The start will be in groups, with an interval between each group, and registration for the running race will continue until the ninth of April.

The member of the Board of Directors of the Padel Tennis Federation, Issa Sharif, who confirmed that all the Gulf teams expressed their happiness to attend and participate in this first tournament of its kind, stressing that this tournament is the beginning of broad cooperation with Various Gulf teams to organize future Gulf championships on a larger scale.

• The session has become one of the most prominent and powerful sporting events in the blessed month of Ramadan.

- Group One: Khorfakkan for the Disabled, Danata Travel, General Directorate of Residency and Foreigners Affairs in Dubai, Dubai Police General Headquarters, Trust Club for the Disabled.

The draw for the Gulf Men's Padel Tennis Championship

The draw for the Gulf Women's Padel Tennis Championship