Mohamed Salah and Sadio Mane made their stardom at the Liverpool gate, and while the Egyptian star clearly excels with his team, the sway is tilted in favor of Mane in the conflict between the two players at the national team level. 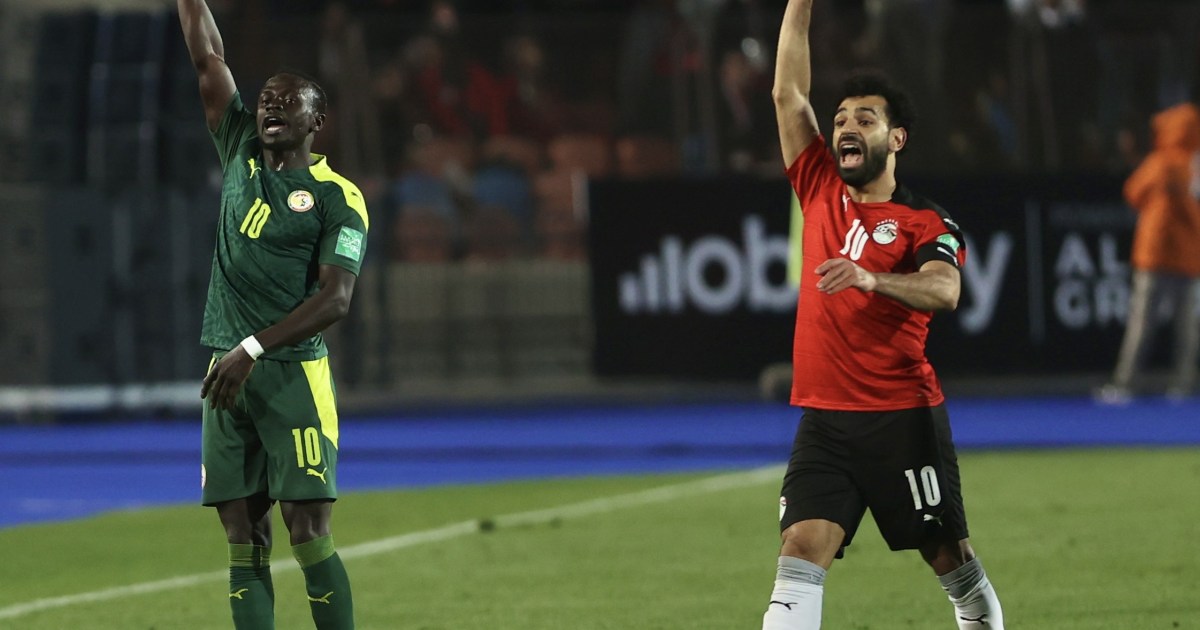 While Egyptian football star Mohamed Salah continues his brilliance and brilliance with his club, Liverpool, in a way that surpasses his Senegalese colleague, Sadio Mane, the latter has clearly imposed his superiority over Salah within the African continent.

Both players, Salah and Mane, made their star and fame from the Liverpool gate after years of brilliance for both of them in the team, knowing that the upbringing of the players may be similar within the African continent.

But Salah succeeded during the past and current seasons in clearly overtaking Mane and taking the lion's share of encouraging and supporting the team's fans in particular and the English fans in general, after he became a real icon in the English Premier League with his record breaking records and impressive and exciting goals.

Despite this, Salah has received two consecutive shocks within the African continent since the beginning of this year, and the two shocks came with the signature of his colleague Mane, who imposed his word on Salah within the brown continent and deprived the "Pharaoh", as some in England nicknamed him, from achieving the dream of winning his first title with the Pharaohs in the African Nations Cup As well as from the dream of reaching the World Cup for the second time in a row.

A few weeks ago, specifically on February 6, Mane and his comrades in the Senegalese team taught the Egyptian team a harsh lesson, after they beat it on penalties in the African Nations Cup final hosted by Cameroon earlier this year.

Mane hit the decisive fifth penalty kick to win the Teranga Lions 4-2 on penalties after 120 minutes of a goalless tie in the African final.

With this kick, Mane prevented his colleague Salah from taking the fifth kick for the Pharaohs, as it would not affect the overall result of the penalty shootout.

And on Tuesday, the scenario was repeated in a very similar way, as the Senegalese team defeated its Egyptian counterpart 1-0 in the second leg of the final round of the African qualifiers for the 2022 World Cup in Qatar, and the two teams failed to change the result over the course of about 120 minutes also after the Senegalese team advanced with an early goal in the third minute .

The first leg match between the two teams in Cairo ended with the Egyptian team winning with an early goal as well, so the total result of the two matches was a 1-1 draw, which prompted the two teams to rule for penalty kicks.

In the penalty shootout, the excitement was strong, as both teams missed their first two kicks, Kalidou Coulibaly's kick rebounded from the crossbar, goalkeeper Mohamed El-Shennawy saved Salio Cisse's kick, while star Mohamed Salah and his colleague Ahmed Sayed (Zizou) hit the first two kicks for the Pharaohs outside the goal.

Despite the success of Ismaila Sarr and Amr Al-Sulayya in scoring the next kick for the Senegalese and Egyptian teams, respectively, Egyptian striker Mostafa Mohamed shocked his team and fans when he missed the fourth penalty kick after Bamba Diang scored the fourth kick for the Teranga Lions.

And then the hopes of the Pharaohs became dependent on a shot from the great Senegalese star Sadio Mane.

For the second time in 52 days, Mane overthrew the dreams of the Pharaohs and snatched a precious victory for his country, where Mane scored the fifth penalty kick for Senegal to take it to the World Cup, and the Pharaohs did not need to pay the fifth kick after this shot from Mane, which decided the result completely.

The start of the Egyptian penalty shootout in yesterday's match with Salah was in the hope of giving the team more confidence in the face of the giant Senegalese goalkeeper Edward Mendy, but Salah threw the ball high and in turn contributed to the failure of the Pharaohs to reach the World Cup.

On the other hand, Mane played a prominent role in leading the Teranga Lions to the World Cup for the second consecutive edition, the third in the team's history.

With this, Mane imposed his speech on Salah within the African continent in the current period, and confirmed his superiority over the Egyptian star at the national team level.

It seems that the next few years will witness more fierce competition between the two players, Salah and Mane, whether inside or outside Liverpool, especially since the numbers and statistics indicate a great convergence in the level of players in most periods.

Each of the players was born and raised in a small village in his country, and after a medium career in the European professional journey, each of them settled in Liverpool for a fee that seems very close as well, knowing that Mane was the first to the ranks of the English club, where he joined him in the 2016-2017 season, while Salah joined the team the following season to start the conflict and competition between them.

So far, Salah has scored 117 goals for Liverpool in 185 matches he played with the team in the English Premier League, with an average of 0.63 goals per game, compared to 0.42 goals per game for Mane, who scored 107 goals in 255 games with Liverpool.

With these numbers, Salah ranked ninth in the list of the best foreign scorers in the English Premier League throughout history.

He seems able to advance several steps in this list this season due to the difference between him and other players on the list, such as Belgian Romelu Lukaku (118 goals), Trinidadian Dwight Yorke (123 goals), French Nicolas Anelka (125 goals), Irish Robbie Keane (126 goals) and the Dutchman. Jimmy Floyd Hasselbaink (127 goals).

On the other hand, Mane occupies 11th place in this list with 107 goals, two goals behind Welshman Ryan Giggs, and 3 goals ahead of Ivorian Didier Drogba.

The fight for prizes and followers

Mane's brilliance in Africa contributed to his winning the African Player of the Year award in the CAF referendum in 2017 and 2018.

On the other hand, Salah won the same award in 2019, while CAF withheld the award in the following two years, 2020 and 2021, due to the Corona pandemic.

Despite Mane’s superiority over Salah in the CAF award, Salah had the upper hand in the struggle for the award for the best player in the world in the referendum of the International Federation of the Game (FIFA), as he reached the final list of contenders for the award in both 2018 and 2021, and won third place in each of them. Mane narrowly lost the chance to reach the final, finishing fifth in the race in 2019 and fourth in 2020.

On the other hand, FIFA indicated that Salah occupies the 10th place among the current football stars in terms of the number of followers on "Instagram" with 48.9 million followers, which is the list led by Portuguese Cristiano Ronaldo with more than 420 million followers.

Mane occupies a lower position in the list with about 10 million followers.