MMA: the French Manon Fiorot, a "beast" launched to conquer the top 10 of the UFC

The most illustrious French representative in MMA will be in the cage on Saturday for her fourth UFC fight. A new step in the rise of this outstanding fighter, who rolled her bump in… 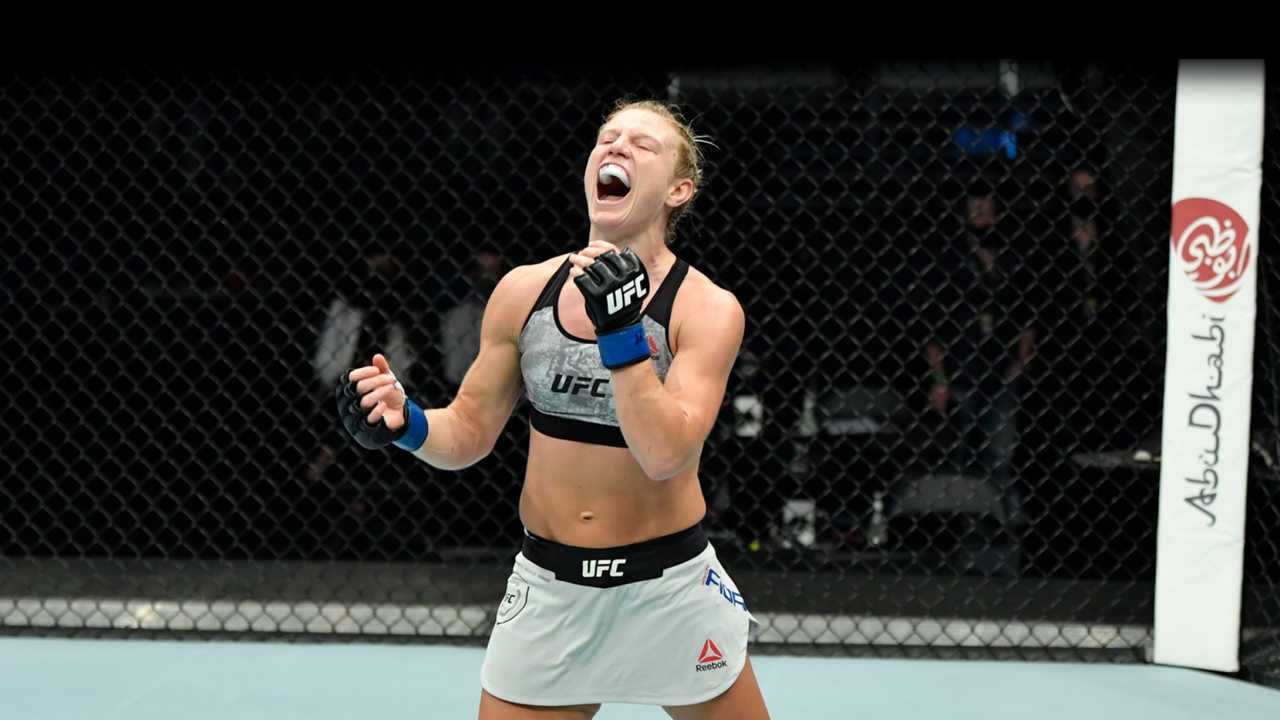 Manon Fiorot is not one to wear down her opponent to win on points.

She rather likes to win with fists, by knocking out her competitor.

On Saturday March 26, she faces Jennifer Maia in her fourth fight at the UFC, the most prestigious mixed martial arts (MMA) league in the world.

A victory would allow her to enter the top 10 and take another step towards the world flyweight championship belt.

The 31-year-old Frenchwoman is a jack-of-all-trades in sport.

Her first loves were karate, which she started at the age of 7, then snowboarding, which she practices in a sport-studies sector.

A discipline of which she even became champion of France before returning to the tatami.

There again, she chained performances and joined the France team.

But a serious cruciate ligament injury made her change her path again.

"I was fed up with karate. In my room, there were also kickboxing classes. I started and I started competitions. Result: 15 fights and 15 victories", she recalls, interviewed by France 24. She also turns to muay-thai.

In this discipline, she twice won the title of champion of France, with twelve victories in as many fights.

: Francis Ngannou, former undocumented in Paris who became a world star of MMA

She then became interested in MMA and entered the cage.

Learning the octagon is tough in her first fight at the 2016 Las Vegas Amateur Championship. “My very first competition goes badly because I lose in the first round. I was not ready for this aspect”, she says six years later.

But the young woman is not one to give up.

While until now, she trained in a disorderly way – individually in each discipline – she joined an MMA club, the Boxing Squad of Nice.

The coaches help him to raise his level.

A year later, she took her revenge and became amateur world champion.

Reality TV to become a pro

She then plans to turn pro.

His trainer presents him with an original opportunity: to participate in a South African reality show whose winner wins a pro contract in the Extreme Fighting Championship, the main MMA league in Africa.

"We knew there was a gateway to the UFC. All the champions on this circuit had their chance. The experience was quite difficult, however. My manager had lied a bit about my fluency in English and my weight", says Manon Fiorot.

His trainer tries to calm the producers down by telling them to wait for the first fight.

Rightly so, because the magic happens.

"I win my fight by K.-O. It was the first of the show and the other fights had been quite boring", says Manon Fiorot.

Then, she forges her path, easily wins the show and is offered the opportunity to fight for the belt against Amanda Lino, the champion, in December 2019.

"She was at home. There was a lot of pressure. It was a huge, full stadium, committed to her cause. She was undefeated and it was my first fight in the 5x5 minute format," recalls Manon Fiorot.

"Still, I feel like I'm flying over the fight. I'm having a lot of fun. I don't lose any exchanges. In the end, there's no knockout but the decision is unanimous in my favor ."

While Manon Fiorot must defend her belt, the Covid-19 hits the planet and brings sport to a halt.

The UAE Warriors, the league of the United Arab Emirates, continues.

The French coach encourages her to change dairies to continue her ascent.

She won three fights there, including the flyweight belt in November 2020. She became the first holder of the women's belt - which did not exist before.

"So I had two belts. We knew that the UFC was going to invite me. My trainer then said to me 'be ready', because often it works that way. We replace an absentee on a fight at short notice" , explains the fighter.

A beast in a cage

Her multi-sport past is one of her assets for her fighting career.

Manon Fiorot says she kept the best of each discipline.

From karate, she has retained impeccable footwork, speed and power, as well as the strategic approach of this martial art: knowing how to touch without being touched.

"I kept the timing and speed of karate. At the beginning, it was still quite complicated. Because with wrestling, you can't have the same distance as in karate," she explains.

"I worked a lot on English boxing, the fact of fighting more closely. My trainer made me progress on that as well as on the fight."

Even his snowboarding interlude comes in handy.

In Ouest-France, she explains that the discipline taught her a certain creativity, which still allows her to surprise her opponents today.

Elements that have forged her fighting style: she is a kick-and-fist specialist.

A "striker", to use the jargon of mixed martial arts, even if she works a lot on "grappling", the wrestling aspect of the discipline, so as not to neglect anything.

His aggressive style earned him an impressive nickname on the circuit: "The Beast" - "the beast" in the language of Molière.

"I've done a lot of camps abroad. And a lot of times they'd say 'She is a beast'! It stuck. I tend to be very aggressive and to finish my fights, which is quite rare in women's MMA", she underlines.

Finally, a few months after his victory in the United Arab Emirates, in January 2021, the UFC called him.

Faced with Victoria Leonardo, she wins by K.-O., becoming the first French woman to win a fight in the prestigious league.

On June 6, 2021, for her second fight, Manon Fiorot won easily in Las Vegas against the Brazilian Tabatha, also by K.-O.

The Covid-19 does not knock her out.

The third fight is more difficult.

The confrontation is staggered.

"The Covid complicated my preparation. After the week of isolation, I had a very intense week when normally you are just supposed to sharpen up before a fight", explains the MMA fighter.

"With the fatigue, the match was very complicated."

The victory is nevertheless at the rendezvous.

this time, but she goes straight up to 14th in her UFC class.

The next meeting should open the doors to the top 10. The Frenchwoman initially had an appointment with Jessica Eye on March 6, but the American injured her eye.

The UFC then offers him an even better chance, a fight against a top 5 opponent: Jennifer Maia.

A challenge that is far from scaring him despite the last minute change.

A chance lost, a better one found

"I had a three month training camp and I'm more than ready. Three weeks of waiting is manageable and I'm really happy with this new challenge. I think Jessica Eye and Jennifer Maia have a similar style, we are just working on some details for this new fight", explains the best French representative of the UFC.

"I know she's tough, tenacious and she won the second round against Valentina [the world champion, NLDR]. But I'm the one who's going to win this fight. This year, I want to finish top challenger the flyweight division.

Manon Fiorot hopes this encounter will speed up her path to a title fight.

A victory, and especially with the way the Niçoise is customary, would therefore propel her into the top 5 and open a royal road to the champion, Valentina Shevchenko.

The ultimate challenge, because the current world champion has only lost three times in her long career, which began in 2003. Besides the featherweight category, Valentina Shevchenko is also number 1 in the women's "pound-for-pound" ranking (all categories combined) women's UFC.

Not enough to impress Manon Fiorot, who dreams of taking the belt and defending it until the end of her career.