Macedonia shocks Italy and the world.. Ronaldo continues his journey towards the World Cup

The Italian nightmare was repeated in the absence of the "Azzurro" from the World Cup finals for the second time in a row, after North Macedonia shocked it with a deadly 1-0 victory Thursday at home in Palermo in the semi-finals of the third track of the European play-off qualifying for the World Cup Qatar 2022, to face Portugal in the next 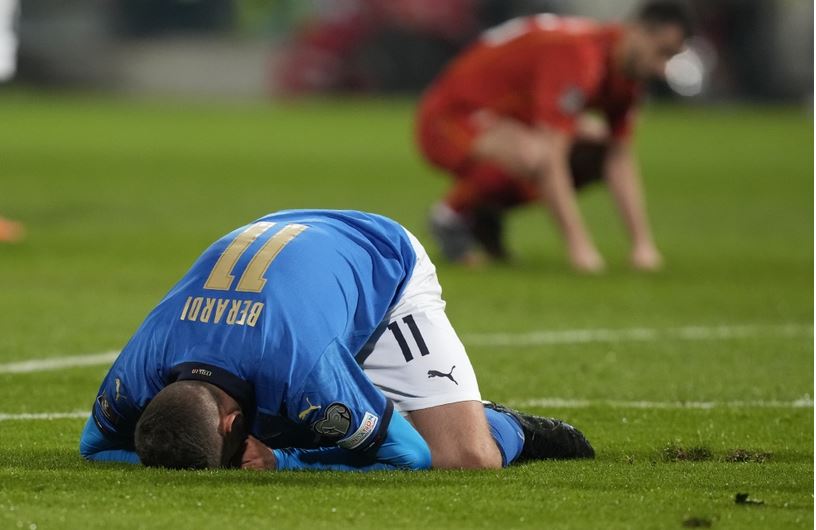 Macedonia shocks Italy and the world.. Ronaldo continues his journey towards the World Cup

The Italian nightmare was repeated in the absence of the "Azouri" from the World Cup finals for the second time in a row, after North Macedonia shocked it with a deadly 1-0 victory Thursday at home in Palermo in the semi-finals of the third track of the European play-off qualifying for the World Cup Qatar 2022, to face Portugal in the final.

After experiencing four years ago the disappointment of missing out on the world finals for the first time in 60 years, the Italians were optimistic about new coach Roberto Mancini, especially after winning the European Cup last summer, but the surprise was achieved Thursday by North Macedonia, with a goal scored by former Palermo striker and Al-Fayha Saudi currently Alexander Trajkovsky in The killer time (2+90), to give his country the ticket to the final of the track, where it meets Tuesday against Portugal in Porto.

At the Renzo Barbera stadium in Palermo, North Macedonia once again played a role in determining Italy's fate in the World Cup qualifiers, after depriving it of direct qualification to the 2018 World Cup and forcing it to play the play-off against Sweden, which snatched its qualification ticket at their expense.

The Italian national team thought that it would be an easy task during its hosting of North Macedonia on October 6, 2017, at the Olympic Stadium in Turin, in the ninth round of the European qualifiers for the World Cup Russia 2018, especially after winning the first leg outside its rules 3-2.

Italy were on their way to win the match by taking the lead until the 77th minute with a goal by Giorgo Chiellini, but Alexander Trajkovsky in particular snatched the equalizer for his country and deprived "Azzori" of two points in this penultimate round, which contributed to ending the qualifiers behind Spain.

North Macedonia and Trajkovski returned to decide the fate of the four-time world champion and prevent her from even testing her luck on Tuesday against Cristiano Ronaldo and Portugal in the final track that will determine the identity of the qualifier for the finals.

"Now we are in a daze," defender Giorgio Chiellini, who entered in the last minutes, told Italian television, "Rai," adding, "It's hard to explain. I think we played a good game again and didn't score."

"We made mistakes from September (during the qualifiers) until now, and we paid for them. I'm proud of my teammates and this group. We have to start over."

Contrary to the old system, the European supplement is not held in direct confrontations from two home and away matches, but the 12 teams are divided into three tracks determined according to the lottery, and four teams will compete in each of them with a semi-final system and a final match, and the winner qualifies for the World Cup (three tracks = three qualified teams for each path).

Sweden and Wales qualified for the final of the second and first tracks, respectively, with the first victory over its guest Czech Republic 1-0 after the extension, with the goal of substitute Robin Quayson, who scored the goal in the 109th minute, and the second against its guest Austria with two goals by Gareth Bale (25 and 51) against a goal by Marcel Sabitzer (64). .

The great change in the Italian squad was in the defensive line in light of the recent injury to Giovanni Di Lorenzo, the failure of Leonardo Bonucci to recover and Giorgio Chiellini's recent return from injury, forcing Mancini to involve Alessandro Bastoni, Gianluca Mancini, Alessandro Florentsi and Emerson Palmieri, while relied on the line of His regular midfield with the trio of Jorginho, Nicolo Barella and Marco Verratti.

As was expected, Italy pressed early, but without real danger, after it was unable to penetrate the defensive dam for the guests.

As the minutes progressed, the Italians began to reach the goal and got a golden opportunity in the 29th minute when the North Macedonian goalkeeper Stoli Dimitrievsky gave them the ball, but Berardi shot it weak and the goal was wide in front of him, allowing the goalkeeper to return and save the situation, before he intervened after a few seconds to block an attempt by A tight angle for Ciro Immobile (30), and then a long shot by Lorenzo Insigne (33).

The result remained the same until the end of the first half, then Italy started the second with an attempt from outside the area by Domenico Berardi, which was blocked by the goalkeeper (53), then the Sassuolo wing followed it with a distant one that passed close to the right post (54) and with a third crossed the crossbar (58).

Substitute Giacomo Rasbadori almost did it with a long shot, but the Sassuolo star's attempt crossed the crossbar (79), and then the extension began to appear after the hosts failed to take advantage of 15 corner kicks without any one for the visitors.

And when the match was breathing its last in its ninety minutes, Trajkovsky shocked the Italians with a superb goal with a shot from outside the area to the right of Gianluigi Donnarumma (2+90).

Portugal and Ronaldo on time

In Porto, Portugal, with its star Cristiano Ronaldo, was on time after reaching the final of the third track, by defeating its guest Turkey 3-1.

. After Jota missed a very easy opportunity when he shot from A few meters, a ball over the crossbar (10) and the Turkish goalkeeper saved Ronaldo's shot (12), Portugal scored the first goal when the ball reached Bernardo Silva on the outskirts of the area, and he fired it strong with his left, I wanted from the right post and prepared in front of Ottavio, so he followed it into the net despite the intervention of the Turkish goalkeeper (15th).

Portugal scored the second goal after a counterattack in which the ball reached Ottavio, who raised it inside the area, to be followed by Jota with his head into the net (42).

The Turks succeeded in reducing the difference after a cunning ball from Ondiz towards Yilmaz, who followed it in the absence of the Portuguese defense into the net (65).

The Turks pressed in an attempt to equalize, and they had a golden opportunity when the referee awarded a penalty kick after a violation by veteran defender Jose Fonte inside the area. Yilmaz blew it but knocked it over the crossbar (85).

Substitute Mateusz Luis Nunish decided the result in favor of Portugal after receiving a perfect ball from fellow substitute Liao, who followed it into the net.