The national football team is preparing to travel to Saudi Arabia, tomorrow, Tuesday, in preparation for the upcoming confrontation with its Iraqi counterpart, next Thursday, at King Fahd International Stadium in the Saudi capital, Riyadh, as part of the ninth round for the first group in the country. 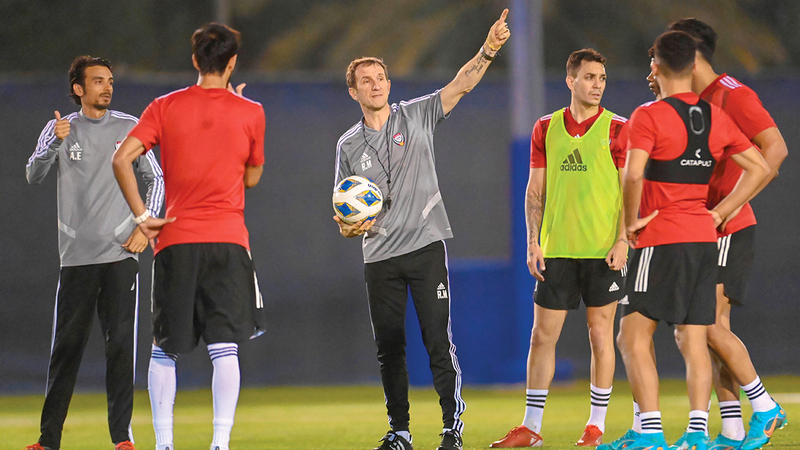 Al Shamsi: The current conditions are in the interest of Al-Obeid after the match was transferred to Riyadh

The national football team is preparing to travel to the Kingdom of Saudi Arabia, tomorrow, Tuesday, in preparation for the upcoming confrontation with its Iraqi counterpart next Thursday, at King Fahd International Stadium in the Saudi capital, Riyadh, within the ninth round for the first group account in the decisive round of the Asian qualifiers for the 2022 World Cup. The team is competing for the World Cup qualification ticket through the third place, which it currently occupies with nine points, behind the teams of Iran and South Korea, who top the rankings of the group teams, and four positive indicators appear that support the team in this crucial and fateful match, for Al-Abyad, after the decision of the Asian and International Football Associations. The football was transferred from the Iraqi capital, Baghdad, to Saudi Arabia for security reasons, as stated in the decision to transfer the match, and these indications are that the match will be held on a neutral ground, after the team was going to play in Baghdad in front of the Iraqi fans who were going to attend heavily to support the national team.Her country, in addition to what enhances the team’s chances of winning the match, and provides the players with the opportunity to play with high concentration, in addition to the technical changes that occurred in the technical staff of the team by taking over the Argentine coach Rodolfo Arruabarina, the coach of the team, succeeding the former Dutch coach Marvik. It leads to spreading a new spirit among the players of the team, as well as a state of harmony and understanding between the players, during the closed camp that the team is currently set up in Dubai, in addition to the team's accustomedness to playing in Gulf stadiums, especially Saudi Arabia.

The team’s training continues amid great interest from the technical and administrative staff in every detail, as the exercises are held in the morning in the gym, and the Al-Abyad team is keen to hold a technical meeting with the players on a daily basis, to explain everything related to the technical, tactical and tactical aspects, while the evening period is for tactical and physical training. During which the coach, Arrobarina, is keen to implement tactical sentences, focus on the physical and tactical aspects, and move on the field with and without the ball, with attention to the three lines of play, what is required of each position, and the tasks of all players.

The players of the team perform the training in high spirits, and in accordance with a great commitment to the instructions, where the preparations are made in a positive manner, with the participation of all the players on the list, after the technical staff ignited the spirit of competition among the players, to reserve a place in the starting lineup, which is in the interest of the national team.

While former member of the Board of Directors of the Football Association and sports analyst, Dr. Salim Al Shamsi, described the match as fateful for the team, considering that the hopes of the team in competing for the qualification ticket through the third-place gate are still present, stressing that the ball is now in the players’ court to win this match and raise the team’s balance To 12 points, which enhances the chances of qualifying through the third place.

Salim Al Shamsi told "Emirates Today": "Circumstances are now all in the team's interest, especially after the decision to transfer the match from Baghdad to be held in Riyadh, given that the team was going to face the Iraqi team, and at the same time, the Iraqi public made it difficult for him, especially The Iraqi public was waiting for this match to be held in Iraq to support the national team strongly in the stands.”

Al Shamsi added: “I expect that the changes that have occurred in the national team, whether in terms of hiring a new coach, or holding the match on a neutral ground, will have a positive impact on the team at this stage.”

It is noteworthy that the technical staff of the national team had selected 28 players, who will be reduced before traveling.

Al Shamsi pointed out the importance of the national team players treating this match as if it were a final or a championship, and they had no choice but to win it.

Al Shamsi stressed that he is optimistic, especially after the recent developments in the national team.

1- Transferring the match to Riyadh enhances the team’s chances of winning.

3- The presence of a new technical staff led by Aruabarina can breathe new life into the players.

4- The state of harmony and understanding between the players during the closed camp that the team is currently set up in Dubai.