Latin American football has been plagued by stadium violence for decades. In question, the public policies which would not have taken the problem head on like Europe l... 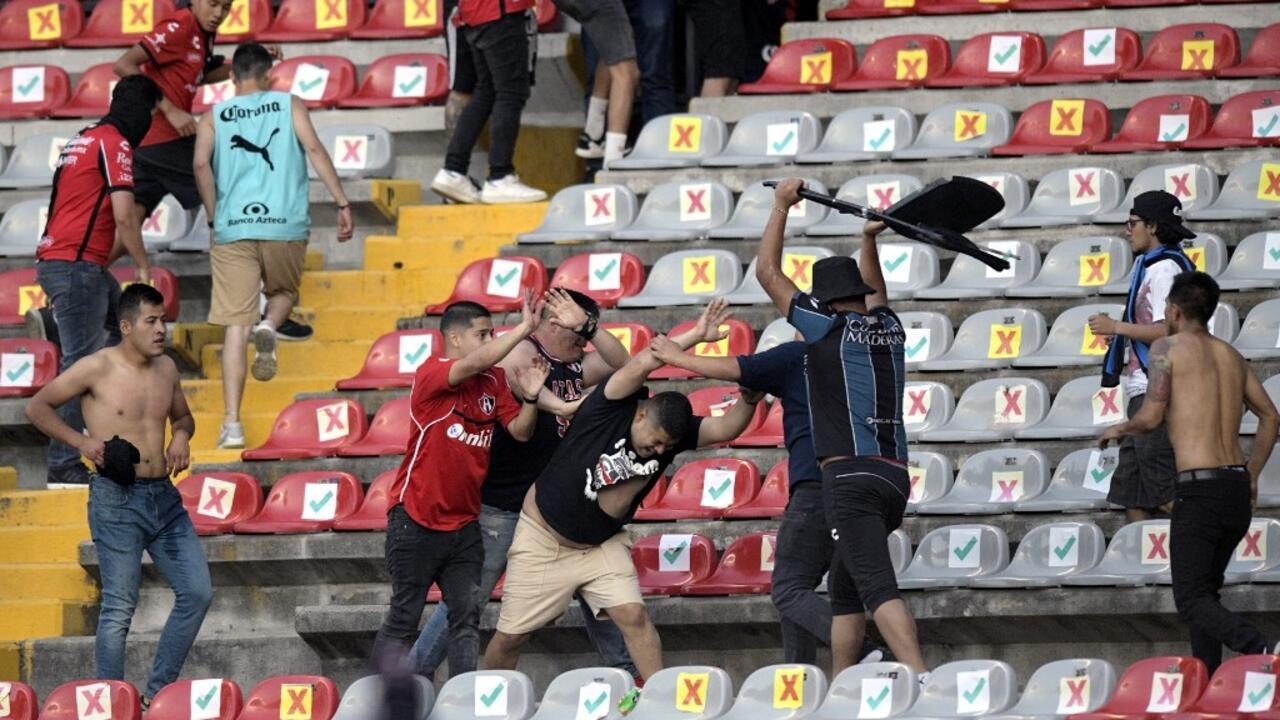 Fights between supporters who injured 26 eight days ago at the stadium in Queretaro, Mexico, on March 5, 2022. AFP - STR

Latin American football has been plagued by stadium violence for decades.

In question, the public policies which would not have taken the problem head on as Europe did at the end of the 80s.

Latin American football continues to be plagued by violence, as shown by the fights between supporters which left 26 injured on March 5 at the stadium in Queretaro, Mexico, and whose images have gone around the world. .

Clashes that took place between supporters of the local club and those of Atlas, the defending champion.

Recently in Belo Horizonte, Brazil, a man was shot and killed during clashes between Atlético Mineiro and Cruzeiro supporters ahead of the Minas Gerais State derby.

The same evening, in Colombia, brawls occurred in Cali on the sidelines of another derby between America and Deportivo.

Countries like Argentina, Brazil, Colombia, Ecuador and Peru have decided to punish violence with prison terms and stadium bans.

I believe that the violence in the stadiums is due to the fact that the political representatives in South America, unlike in Europe, do not take the problem head on

There is a form of collusion between football leaders, politicians and the police.

Enrique Sacco willingly cites the example of the British government.

As a reminder, in the 80s, England took the problem head on, by prohibiting access to the stadium for Hooligans.

Hooliganism took a turn in 1985 due to the Heysel tragedy, one of the most significant sports-related tragedies caused by hooliganism, killing 39 people and injuring over 400 people.

During the 1984-1985 European Cup final between Liverpool and Juventus Turin, the separation grids and a low wall collapsed under the pressure and weight of supporters.

English hooligans are singled out.

It will still be necessary to wait for the tragedy of Hillsborough in 1989 to see the establishment of a "real" global policy of supporters in England, although this tragedy is not linked to hooliganism.

Hooliganism is no longer a problem.

If in South America measures inspired by the fight against hooligans in Europe, such as biometric identification or video surveillance in stadiums, have indeed been introduced, the phenomenon of violence in the stadium is resisting.

And the death figures are still very high: 157 deaths in Brazil between 2009 and 2019, 136 in Argentina for twenty years and at least 170 in Colombia between 2001 and 2019, according to various academic or associative studies.

The equivalent of an Airbus A 380 which would explode in full flight.

International matches under tension in Argentina

In Argentina, it is not the state that is in charge of stadium security, but security services formed by unions or supporters, explains Enrique Sacco.

On the other hand, there are many standing places in the popular stands, with non-nominative tickets, which prevent the tracing of people who may have committed violent acts.

Banning them from the stadium is therefore complicated.

While Argentine families are relatively safe at their own club, as they are in their own stands, this is not the case at international matches, or the

final between the two Buenos Aires clubs, River Plate and Boca Juniors, had to be moved to Madrid, after the attack on the Boca players' bus by River supporters.

According to Enrique Sacco Chile has made progress, but Argentina, Brazil and Mexico still have big problems with violence.

There is no magic bullet to stop violence in football but it can be reduced.

For that, we need a more comprehensive public policy

After the Queretaro riots, Mexico banned the movement of visiting supporters, a means already used in Argentina, Brazil and Colombia, but which some experts believe only moves violence to the streets.

In Brazil, for example, since February 12, at least nine acts of violence have been reported, including the death of a Palmeiras supporter by gunshot and the stoneing of team buses, in which several players were injured.