Video- Praises showered on him.. Ronaldo sends an enthusiastic message to United players and fans after his historic triple in Tottenham 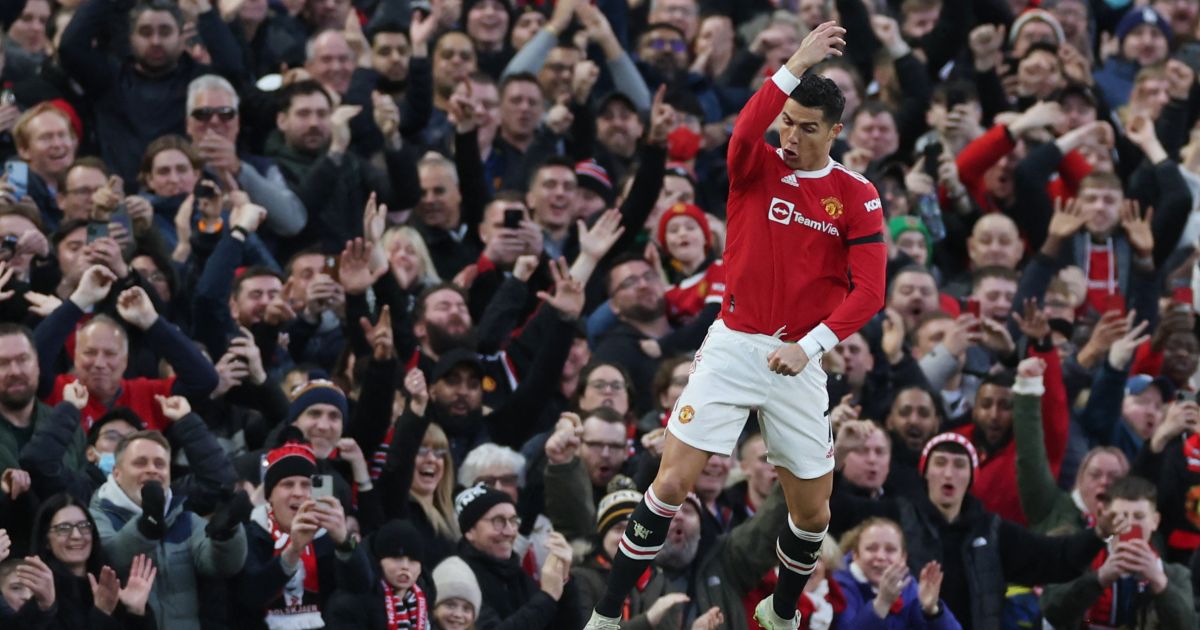 Cristiano Ronaldo said there are no limits for the Manchester United football team, while interim coach Ralph Rangnick praised the Portuguese star, who scored three goals (hat-trick) and led his team to a 3-2 victory over Tottenham on Saturday.

And the British news agency “BA Media” (BA Media) reported that Old Trafford hosted the important match in the struggle for existence in the first four places in the league yesterday, Saturday, as the interim coach of Manchester United confirmed that the team should have won to preserve his hopes of playing Champions League next season after losing to Manchester City in the last round.

Ronaldo missed the match against Manchester City due to his complaint of a thigh injury, and his return to Portugal was a surprise to everyone, but he returned with great fanfare yesterday, Saturday, and opened the scoring early with a missile shot from 25 yards.

Enjoy with us @Cristiano's first goal in the #United_Tottenham match 🔓👌 #United |

Harry Kane equalized the score for Tottenham with a penalty, but Ronaldo, 37, put Manchester United in front again before the end of the first half, and then completed his three goals to give Manchester United the victory after Harry Maguire scored an own goal by his team, giving Tottenham a equaliser.

Ronaldo wrote on his account on "Instagram" after his first "hat-trick" in the Premier League since January 2008 against Newcastle, "I am very happy with my first hat-trick since returning to Old Trafford again. Nothing beats the feeling of returning to the field and helping the team with goals and effort." .

"We've proven once again that we can beat any team any day, as long as we work hard and stand together as one man. There are no limits to Manchester United! No matter what happens! Let's go, Devils!"

The Portuguese star's post garnered more than 10 million likes, and thousands of comments, including the comments of his colleagues at Manchester United and his former colleagues in clubs he played for, such as Marcelo from Real Madrid, and Cuadrado from Juventus, Italy.

Rangnick was dumbfounded by Ronaldo's performance and joked that Ronaldo should come back to Portugal a lot.

"He certainly made the difference with his three goals, but not just with the three," said the interim Manchester United coach. "It was his best performance, at least since I arrived, in terms of possession."

He added, "I think that the team as a whole showed the reaction that we expected to show, after the bad second half at Al-Ittihad Stadium. And returning to lead again after two draws showed the mentality of the team today."

"We should have won!"

"We were joking a little bit, maybe it makes sense to send him to Portugal for 3 days, and after that we don't involve him in training for two days and then we put him in training on Thursday," Rangnick added.

"By the way, he showed the same level of performance in training on Thursday. So after this training, even though he was away for a week, I decided to put him in the game from the start. Maybe we should do that for the rest of the season."

The loss was a painful blow to Tottenham's hopes of qualifying for the Champions League, and Tottenham coach Antonio Conte also praised Ronaldo.

"It was a great performance by Cristiano," he said. "Unfortunately, I know him well, so what he did was not a surprise to me."

Both are legends in their game ⚽️🏈