The controversy over the use of “foreign arbitration” continues.. “Citizen judgment” is worthy of trust

Athletes considered that there is no justification for Al-Wahda and Al-Ain teams to use a foreign referee to manage the upcoming “Clásico” between them, tomorrow, Saturday, in the 19th round of the ADNOC Professional League, after the foreign whistle was absent since the 10th round, noting that the past matches of the round 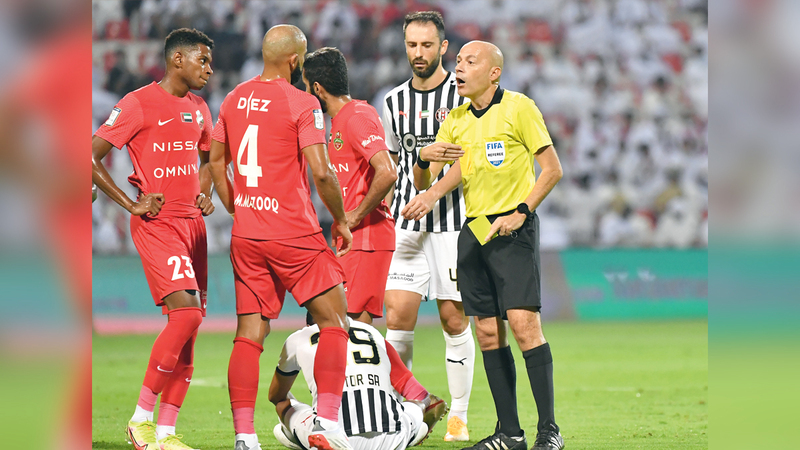 Athletes consider his appearance for the fourth time unjustified.. and others: A right to unity and the eye

The controversy over the use of “foreign arbitration” continues.. “Citizen judgment” is worthy of trust

Athletes considered that there is no justification for Al-Wahda and Al-Ain teams to use a foreign referee to manage the upcoming “Clásico” between them, tomorrow, Saturday, in the 19th round of the ADNOC Professional League, after the foreign whistle was absent since the 10th round, pointing out that the past matches of the league did not witness errors. A catastrophic justification for the return of foreign arbitration, stressing that mistakes are incoming and part of the game, and that more than one local referee has previously led the "Derbyat", and the two international referees, Muhammad Abdullah Hassan and Ammar Al-Junaibi, stand out from them, but others believe that the past rounds were accompanied by arbitration errors that make both unity and Al-Ain He uses the foreign whistle to remove pressure from the local government in a sensitive and fateful match for them, after the struggle for the league title intensified and the result of the match determined the course of the championship.

The athletes told "Emirates Today": "The match between Al-Wahda and Al-Ain is a summit that was supposed to be run by a local arbitration staff, because more than one Emirati referee can lead this match, but as long as the Football Association opened the door for the use of the foreign whistle, the two teams have the right to use a foreign referee."

Al Ain leads the league standings with 43 points, while Al Wahda is in second place with 39 points, meaning that the difference between them is only four points.

The current season of the UAE League witnessed the return of foreign arbitration in three matches, the first of which was during the Al-Ahly youth match and Al-Jazira in the seventh round, which was led by a Turkish arbitration team led by the international referee Junit Shakir, as well as the match between Sharjah and Al-Wehda in the ninth round led by the German referee Tobias Steller, and the Al-Ain and Al-Jazeera match within the round The tenth was led by Italian referee Daniele Doveri.

Salah Amin said, "The meeting of Al-Wahda and Al-Ain is an appropriate summit for the local whistle to appear in crucial times and highlight its potential, and therefore all parties will benefit, whether teams or referees, especially the Emirati referee," stressing that there is more than one referee who can manage this match.

And Salah Amin added, “It cannot be that in every sensitive match, foreign referees are resorted to while the Emirati referees run the regular matches, and therefore there is no confidence in the local government when

It is used in Asia.

For his part, the former Assistant Secretary-General of the Football Association, Imran Abdullah, stressed that in his estimation, there are currently no catastrophic arbitration errors that require the use of foreign referees again in the league, pointing out that the Emirati arbitration has previously been present in the World Cup tournaments for teams and clubs such as Muhammad Abdullah Hassan and Ammar Al-Junaibi.

Omran Abdullah added, "For me, from the beginning, I was against the presence of foreign arbitration in the UAE league, as it would take the opportunity of the Emirati referees, in addition to the high financial cost of one match, which amounts to 170,000 dirhams, in addition to the fact that the foreign referee who comes to manage matches in our league will not be a super referee."

He continued, "As long as the referee runs football matches, mistakes are possible, as they are part of the game."

In turn, the former international football referee, Abdullah Al-Ajel, considered that the resort of the two big teams, Al-Wahda and Al-Ain, to seek the help of foreign referees is a positive thing to remove pressures from the local referees in a fateful match for them.

Stressing at the same time that it is not the first "summit or derby" match that a citizen referee can run, but during the past years there have been confrontations between Al Ain and Al Wahda in final matches, in which there was more pressure than this match, but it was led by citizen rulers and succeeded in leading it.

Al-Ajli pointed out that from his point of view, there have already been refereeing errors during the past rounds, considering that as long as the Football Association opened the door for the use of the foreign whistle, the two teams have the right to resort to foreign arbitration to lead this match.

■ The match between Al-Ahly and Al-Jazira youth, the seventh round, led by the Turkish referee Cüneyt Şakir.

■ The Sharjah vs Al Wahda match, the ninth round, was led by German referee Tobias Steller.

■ Al-Ain and Al-Jazira match, the tenth round, led by Italian referee Daniele Doveri.