A "goals party" in the match between Real Madrid and Sociedad... and a "royal" dance on a great occasion

The Real Madrid team celebrated the 120th anniversary of the founding of its club, and overturned its deficit with a clean goal to a great 4/1 victory over Real Sociedad today, Saturday, in the twenty-seventh stage of the Spanish Football League. 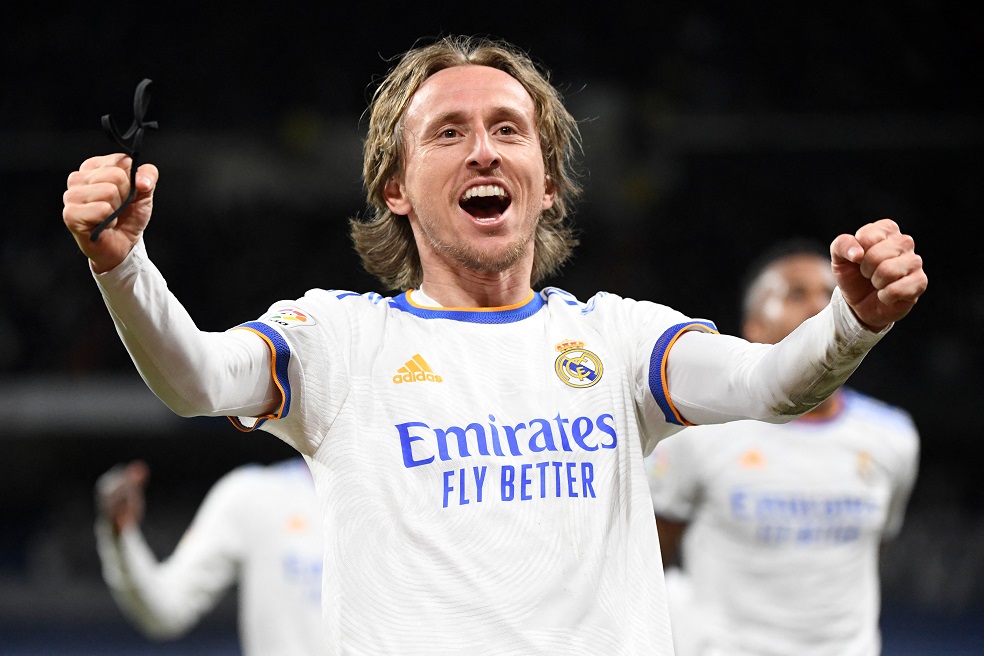 A "goals party" in the match between Real Madrid and Sociedad... and a "royal" dance on a great occasion

The Real Madrid team celebrated the 120th anniversary of the founding of its club, and overturned its goal by a clean goal to a great 4/1 victory over Real Sociedad today, Saturday, in the twenty-seventh stage of the Spanish Football League.

Valencia confirmed his uprising in the Spanish League and achieved his second victory in a row in the competition with a precious 3/1 victory over Granada. zero.

At the “Santiago Bernabeu” stadium in the capital, Madrid, Real Sociedad surprised its host Real Madrid with an early goal scored by Mikel Oyarzabal from a penalty kick in the tenth minute, but Real responded strongly and scored two consecutive goals before the end of the half scored by Edward Camavinga and Luka Modric in the 40th and 43rd minutes to end the first half in his favour.

In the second half, Real consolidated its victory with two more goals scored by Karim Benzema and substitute Marco Asensio in the 76th minute from a penalty kick and 79, bringing Benzema his score to 20 goals as the top scorer in the competition this season.

On Sunday, Real Madrid celebrates the 120th anniversary of the founding of the club on March 6, 1902.

Real Madrid raised its score to 63 points at the top of the competition table, and Sociedad's balance froze at 44 points in sixth place.

The two teams made a quick and strong start to the match, as Sociedad seemed a strong match for the royal team from the first moment in the match.

Sociedad surprised its host with a very early penalty kick in the tenth minute that the referee did not hesitate to calculate.

The penalty kick came as a result of a quick, organized attack for the visitors in the ninth minute, with Dani Carvajal, who did not seem to block David Silva inside the penalty area.

Mikel Oyarzabal hit the penalty kick to the left of goalkeeper Thibaut Courtois, scoring the goal for Sociedad.

The early goal infuriated the riyal;

The team players rushed in the attack in search of the equaliser, but they collided with the strong defense of Sociedad.

Sociedad succeeded in putting pressure on the Real players outside the penalty area to deprive them of appropriately building attacks and penetrating the penalty area, despite the increase in Real Madrid players' possession of the ball by more than 60%.

On the other hand, Sociedad's counterattack constituted a severe disturbance to the Real's defense, despite its rarity.

With the passage of the first half hour of the match, Real Madrid intensified its attempts in search of the equaliser, but luck turned against the team.

Casemiro hit a powerful shot from a distance in the 32nd minute, but it went wide of the goal.

Real's attempts resulted in the equalizing goal in the 40th minute, signed by Camavinga, who ended a quick attack for Real with a missile shot from a distance, and the ball hit the goal to the left of goalkeeper Alejandro Remiro.

Real took advantage of the confusion in the ranks of Sociedad immediately after the goal, and players put pressure on the Sociedad defense and snatched the ball, so Karim Benzema scored a goal in the 41st minute, which was canceled by the referee for offside.

Remero also saved a dangerous chance from Rodrygo in the 43rd minute, but Modric translated the Real's uprising at the end of the half, and scored the goal with a missile shot from a distance close to the distance from which Camavinga scored the equalizing goal, and the ball settled in the upper corner to the right of Remero in the 43rd minute.

With the start of the second half, Sociedad made two changes at once, with Nice Djawahara and Rafinha Alcantara replacing David Silva and John Pacheco, respectively.

And the two teams resumed their mutual attack in the second half, and Remiro saved a deceptive creeping shot from Benzema in the 53rd minute.

With the passage of the first minutes of this half, Real imposed complete control over the course of the game, and Remiro blocked a missile shot by Casemiro from a free kick in the 54th minute, and then he blocked a dangerous shot fired by Benzema from inside the penalty area.

And luck almost served Vinicius Junior in the 62nd minute when he manipulated the Sociedad defense and hit the ball powerfully from outside the penalty area, but it hit Josepa Zaldua and passed directly outside the post.

Instead, Benzema was rewarded for his effort in the match when the player scored a goal for Real in the 69th minute, but the referee canceled it because of Rodrygo's offside.

Sociedad defender Artiz Elustondo did not find that Vinicius Junior was obstructing the edge of the penalty area after an organized quick attack by Real in the 74th minute. ) .

Benzema hit the penalty kick to the left of goalkeeper Remero, scoring the third goal for Real in the 76th minute of the match.

Marco Asensio played for Real in the 77th minute, at the expense of Rodrygo.

The player did not delay in announcing his presence, as he scored the fourth goal for Real in the 79th minute.

The goal came after a quick attack by Real and a long pass from Casemiro, from which the ball reached Carvajal, who rushed into the Sociedad penalty area, who calmly passed the ball to Asensio to hit it directly to the right of the goalkeeper, recording Real's fourth goal in the 79th minute.

Valencia raised its score to 36 points in ninth place, where today it achieved its second victory in a row after seven games in which the team missed out on victories, and Granada's balance froze at 25 points in the seventeenth place after it suffered its sixth defeat, compared to only one draw in the last six matches it played in the competition.

The first half of the match ended in a goalless tie, then Gonzalo Guedes and Maximiliano Gomez scored two consecutive goals for Valencia in the 48th and 51st minutes.

Friendly fire revived Granada's hopes in the match when Valencia's Jaume Dominic Sanchez scored a mistake in his own goal in the 56th minute, but the team's joy for the goal did not last long, as Carlos Soler Barragan scored the third goal for Valencia from a penalty kick in the 62nd minute.

Osasuna raised its score to 35 points in tenth place, and Villarreal's balance froze at 42 points in seventh place, knowing that it was the team's first defeat in the last six matches it played in the competition.

The first half of the match ended in a goalless draw, then Ezequiel Avila scored the game's only goal in the 63rd minute.

Espanyol beat Getafe with two goals scored by Leandro Cabrera in the 17th minute and Eric Capaco of Getafe by mistake in his own goal in the 27th minute.

Espanyol raised its score to 32 points to advance to the twelfth place, and Getafe's balance froze at 27 points in fifteenth place.