Read, listen and feel the Winter Paralympics from a different perspective 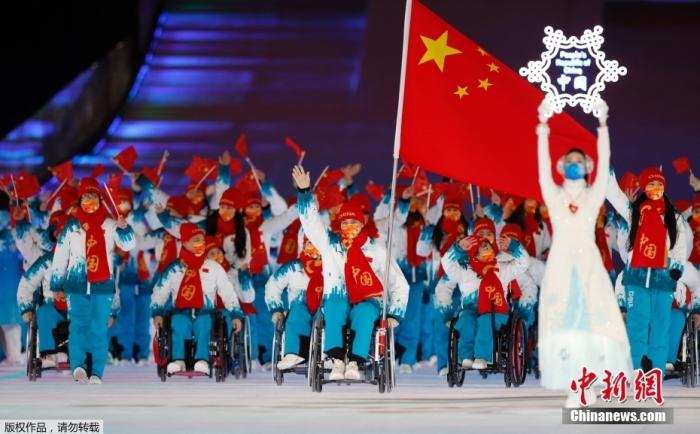 Less than two weeks after the closing of the 2022 Beijing Winter Olympics, the "city of double Olympics" ushered in another ice and snow event.

The constantly flashing wheelchairs, prosthetics, guides, and barrier-free facilities throughout the closed loop of the Winter Paralympics remind everyone that this is a special Olympic event - the 13th Winter Paralympic Games.

On March 4, the opening ceremony of the Beijing 2022 Winter Paralympic Games was held at the National Stadium "Bird's Nest", and Xuerongrong officially "taken over" Bing Dun Dun.

The picture shows the entrance of the Chinese delegation.

This is a game that requires careful "reading".

Compared with the just-concluded Winter Olympics, the arena here may lack suffocating speed and dazzling skills, but there will also be "faster, higher, stronger" arena pursuits and exciting and fierce competition. scene.

Reading the game is to discover strength and beauty from their imperfect movements; to feel the life force of self-improvement from their perseverance and tenacious struggle.

The "Gold Medal War" has always been the biggest gimmick in competitive sports.

But in "reading" the Winter Paralympic Games, the competition for medals has never been the biggest attraction, and surpassing yourself and realizing your dreams are the eternal themes of this arena.

Winter sports, especially snow sports, are a game for the brave and challenging for able-bodied people.

Therefore, when these Winter Paralympic athletes stand on the world's highest level of competition in the "ice and snow", they have already issued a strong declaration to the world.

At the same time, at the current Winter Paralympic Games, 96 athletes from the Chinese delegation will compete in 73 events, of which more than half of them will appear on the Winter Paralympic stage for the first time.

From the moment these athletes stood on the field, the Chinese Winter Paralympic Movement has achieved a historic breakthrough.

The picture shows the barrier-free seats on the "Ice Cube" stand.

This is also a sports meeting that requires careful listening.

Due to a congenital genetic defect, German athlete Vivian has never seen the world, but she has become an excellent biathlon athlete with her ability to "listen to the sound"; a Brazilian athlete who lost her right leg at the age of 17 Andre, although the motherland has no snow all year round, but he has stood on the top ice and snow arena.

Du Haitao, a Chinese player who lost his arms when he touched a transformer when he was a child, survived a miracle.

At the 2010 Vancouver Paralympic Winter Games, as the only athlete among the 19 competitors who lost both arms, he was unable to balance his body and control his direction with snow poles in the men's standing 20km cross-country skiing competition, and finally relied on moving his legs. Tenaciously and patiently slid to the finish and finished seventh...

It is also necessary to listen to the voices of these Winter Paralympic athletes.

This is an event that needs to be truly felt.

Nearly 100 Chinese athletes participating in this Winter Paralympic Games are all amateur athletes, and their occupations include workers, farmers, students, staff and freelancers.

They were once "closed by a door" by "God", and ice and snow sports are a window opened for them. No matter what achievements they have on the field, this experience will be the most precious wealth in their lives. .

Feel their joys and sorrows, share the highlights of their lives, and let them know that we are always there on their journeys, whether difficult or happy.

After the end of World War II, with many wounded soldiers and ordinary people trying to get back into skiing, disabled winter sports developed, culminating in the inaugural Winter Paralympics in 1976.

Therefore, the Winter Paralympics has been marked with a deeper wish for peace.

In the previous Winter Paralympic Games, there are many touching images of mutual sympathy, mutual support, or mutual love. Feeling these warm moments, I hope that the most sincere and beautiful emotions of human beings can quench the smoke of disputes.

The 2022 Beijing Winter Paralympics will be held from March 4 to 13.

In the next 9 days, let us watch this ice and snow event from a different perspective.