Mahdi is not satisfied with the performance of Al-Ahly youth..Football is the fighting spirit and good organization

Shabab Al-Ahly coaches, Mahdi Ali, and Al-Wahda, French Gregory Dufferins, had mixed feelings about the performance of their two teams in the match that brought them together the day before yesterday, in the first leg of the semi-finals of the Professional League Cup, the result of which ended with the victory of the “Dubai Knights” with a goal without a response. Al-Ahly in front of 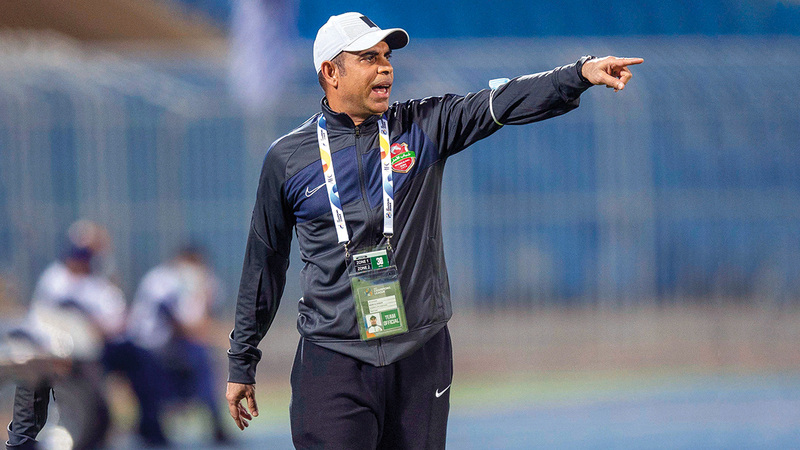 Gregory is proud of the Unity team

Mahdi is not satisfied with the performance of Al-Ahly youth..Football is the fighting spirit and good organization

Shabab Al-Ahly coaches, Mahdi Ali, and Al-Wahda, French Gregory Dufferens, had mixed feelings about the performance of their teams in the match that brought them together the day before yesterday, in the first leg of the semi-finals of the League Cup, and the result ended with the victory of the "Dubai Knights" with a goal without a response.

Al-Ahly youth suffered in front of Al-Wehda, who fought the confrontation with a group of young players.

Shabab Al-Ahly waited until the 80th minute for their Brazilian substitute player, Gustavo Olvera, to score the only goal of the match.

The two teams are scheduled to meet in the return match on Tuesday at Al Nahyan Stadium.

On the face of coach Mahdi Ali, signs of dissatisfaction appeared during the press conference after the match, and he expressed this by saying: “Football is one language, its vocabulary will always remain desire and play with a high fighting spirit, and good organization. These expressions will remain, in my view, fixed, and will not change It is true that we scored a goal, which will give us a somewhat advantage in the return match.”

He added: “Despite winning and scoring a goal, but we have to admit the need to review ourselves again, and reconsider some of the issues related to the mistakes that occurred on the part of our players in that match. We cannot play like this in the upcoming matches. There were a lot of passes. The error in the half of the field, and the desire must be stronger, winning in one match means that you will reach the final, and this in itself imposes more effort and a stronger determination to win. I hope the picture will improve in the upcoming matches.”

He pointed out: "I would like to salute the Al Wahda players for what they did in that match. They showed a distinctive way in terms of organization, as well as a high fighting spirit. They made the match difficult for us throughout the 90 minutes."

For his part, the coach of Al Wahda team, French Gregory Dufferins, confirmed that his team does not deserve the loss it suffered against Al-Ahly youth.

He said that there is some sadness over the loss of the result of the Al-Ahly youth match, in reference to the great performance of the young players in that confrontation.

He added: "I am not sad about the loss, it may be compensated in the return match, but I am more sad for the efforts of the players that were lost, but I am proud of their performance, which confirms that Al Wahda club is full of its players who are able to defend the club's shirts."

Al-Wahda player, Tahnoun Al-Zaabi, confirmed that his team performed well in front of Al-Ahly youth, and the performance of the young players deserves praise and respect from everyone.

He said in a press statement: "We played in that match without a large number of important players, as the coach decided to give them rest, given the state of fatigue that afflicted them from the succession of matches."

He added: “We entered the match, and our goal was not only a good performance, but we were also thinking about the result, because we did not come to the match stadium “for fun” or to perform a duty, we were close in many times to scoring, or at least not conceding any goals, But luck failed us in the last minutes, and this is the case with football, in general, there is another match, and we will strive to win it and reach the final match of the competition.”