The 18-year-old pedestrian, who this Sunday was run over in Zaragoza by a drunk driver who later fled, has died at the Miguel Servet Hospital, where... 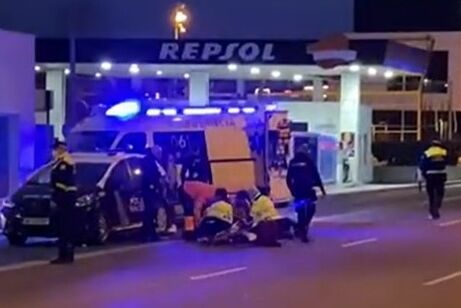 The 18-year-old pedestrian, who this Sunday was run over in Zaragoza by a drunk driver who later fled, has died at the Miguel Servet Hospital, where he remained admitted to the ICU in a state of extreme gravity.

The alleged perpetrator of the events has entered provisional prison by court order after being arrested by the Police shortly after.

He is charged with the alleged

crimes of alcohol consumption at the wheel, homicide due to serious recklessness, injuries and omission of relief duty

on Avenida Mayor José Atarés in the Aragonese capital.

Suddenly, a vehicle driven by LVM,

, appeared , which was traveling in the direction of the Santiago bridge and

ran over the couple

, who, as reported by hospital sources on Monday, died late on Sunday.

A witness indicated that the vehicle was

driving abnormally and that it accelerated before the accident occurred.

According to the Police,

the driver did not make the slightest attempt to stop

to help the injured after the accident, but fled.

who was traveling at that time on the white bus that was heading to the Pyrenees to spend a day skiing.

After the escape attempt,

a witness wrote down the license plate

and the direction the vehicle was taking, which allowed a National Police patrol to intercept it shortly after on Mariano Baselga Street, in the Arrabal neighborhood, and proceed to arrest it.

The detainee is being investigated for the alleged

crimes of driving under the influence of alcohol, homicide due to serious recklessness, injuries and leaving the scene of the accident

This Sunday night he was brought to justice and

the judge ordered his admission to provisional prison.

, as this is the time when

many young people leave a nearby nightclub