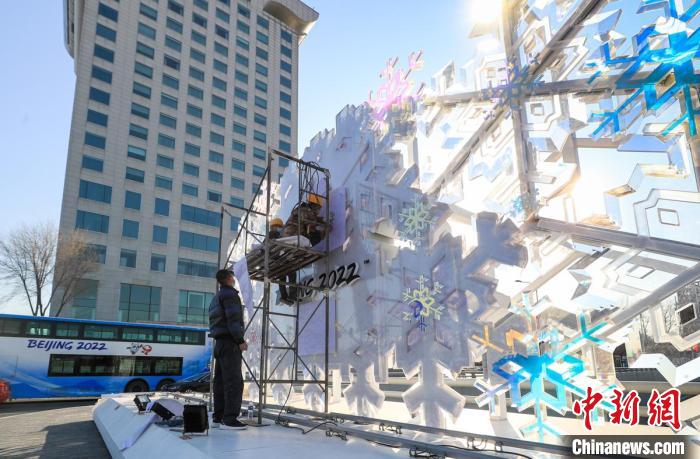 On the 24th, in the central area of ​​Beijing Olympics, workers were converting the Winter Olympics landscape "ice and snow event".

"Bingdundun" alone will be converted to "Snow Rongrong"

The reporter learned from the Beijing Winter Olympics City Operation and Environmental Protection Group Office on the 24th that in accordance with the requirements of the "Work Plan for Urban Landscape Arrangement for the 2022 Beijing Winter Paralympic Games", from February 21 to February 28, the city will carry out orderly development. The transformation of the urban landscape layout from the Winter Olympics to the Winter Paralympics ensures that "both Olympic Games are equally exciting".

On the 24th, on the side road of the North Fourth Ring Road in Beijing, the blue road flag has been replaced.

28 light shows in the city are updated simultaneously

Yang Weiyi, chief of the Landscape Management Section of the Urban Management Committee of Chaoyang District, Beijing, introduced that the Olympic Tower's light show will add the emblem, mascot and snowflake elements of the Winter Paralympic Games.

The Winter Paralympic Light Show will last from March 4th to March 13th, and continue to accompany citizens from 18:00 to 24:00 every night.

In the nursery of Beijing Greenbelt Conservation and Management Affairs Center, the cold-resistant flower, Viola, is cultivated.

On the side road of the North Fourth Ring Road next to the Olympic Center, workers from the Urban Lighting Management Center of the State Grid Beijing Electric Power Company are replacing the red road flags on the street light poles with blue road flags.

According to Wen Daji, safety director of the Urban Lighting Management Center, from 0:00 on the 24th to the 26th, it is planned to replace 8,488 road flags on 11 roads including Fushi Road and North Fourth Ring Road in three days.

He mentioned that in view of the strong wind and climate characteristics of Beijing in winter, the production process and installation method of the propaganda road flag have been optimized, the fabric has been thickened, and the form of 4+2 (4 fixed rods and 2 fixed holes) has been adopted. fixed.

"The wind resistance and firmness of the optimized road flag have been greatly enhanced, and it has basically achieved wind resistance, rain and snow resistance. After inspection, there is no damage in the case of wind level 5," Wen Daji said.

In the nursery of the Beijing Greenbelt Conservation and Management Affairs Center, workers are watering Viola.

Cold-resistant flowers will be used in Tiananmen Square

In February, Beijing is still cold in spring. How can the early spring flowers used in the Winter Paralympic landscape in Tiananmen Square and other places bloom beautifully in the subzero temperature?

At the Beijing Greenland Maintenance and Management Affairs Center in Changping District, Sun Kai, head of the flower production project of the Beijing Landscaping Bureau, introduced that the flowers used in these landscapes are all "one in a hundred" cold-resistant flowers.

It is the first time to use landscape flowers in Beijing in early spring.

Sun Kai said that after the cold-resistant test, the project team selected 30 cold-resistant varieties including Viola japonica and flamingo nantia from 500 mature varieties.

Among them, about 80,000 Viola and Flaming Nandina will be used at the bottom of the "Wonderful Winter Olympics" flower beds in Tiananmen Square to replace the organic mulch during the Winter Olympics.

Sun Kai said that with the current temperature in Beijing, these flowers can bloom for two to three weeks.

In case of snowfall or low temperature, the flowers will be kept warm by covering them at night.

In case of extreme weather, the project team has also prepared "spare flowers" for replacement to ensure the perfect presentation of the Winter Paralympic landscape.

It is reported that the urban operation and environmental assurance team of the Winter Olympics has intensified the operation and maintenance of the urban landscape layout. The city has set up 58 backup points, organized more than 700 security personnel, more than 200 inspection vehicles and 42 professional landscape lighting guarantees. Group, implement 24-hour inspection and management, and always keep the landscape layout standardized, clean and beautiful.