Unjustified courage: why a blogger from the USA should abandon the idea of ​​​​a fight with Nurmagomedov

Jake Paul has expressed a desire to fight Khabib Nurmagomedov in a duel under the rules of mixed martial arts. A well-known blogger believes that he needs to work a little on his wrestling skills. At the same time, he is confident in his superiority over the former UFC champion in the stand. Why an American should abandon the idea of ​​​​fighting a Russian who ended his career and what consequences await him in case of defeat - in the RT material. 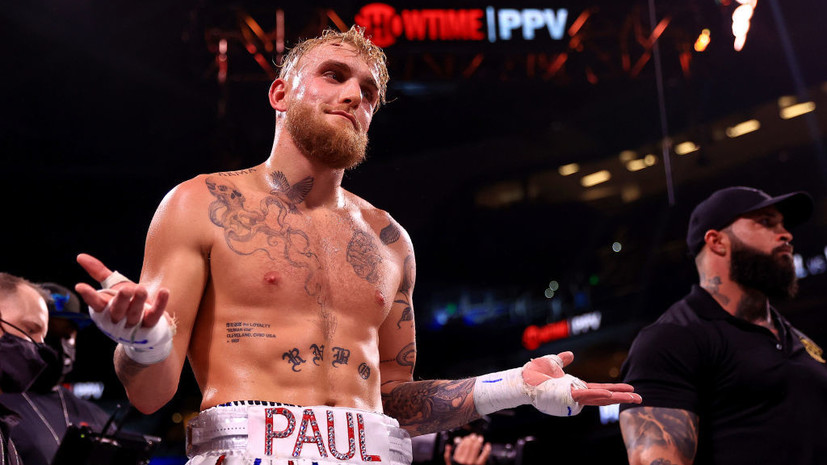 During the winter Olympic Games in the world of martial arts, there were many events that did not receive due attention from fans and the media.

And in a duel according to the rules of MMA, not boxing.

“I would fight Khabib in MMA if they wanted to make that offer.

Because that would be exciting.

I would go for it with great interest, especially if I had more time to train.

It would be a huge fight.

And all I would have to do is work on my wrestling skills.

Because I could beat him in the rack, ”said Paul on The MMA Hour.

In general, such a statement completely fits into the model of behavior of a scandalous blogger.

Everyone remembers his skirmishes with Ben Askren and Tyron Woodley, insulting statements about the failed rival Tommy Fury, as well as a media war with UFC head Dana White.

He severely criticized the level of salaries in the Absolute Fighting Championship and persuaded athletes to leave the organization, and he even challenged the president of the promotion to fight.

Nurmagomedov was deprived of Paul's attention for a long time, but from mid-December he began to talk about him more and more often.

For the first time this happened in one of the interviews on the eve of the return fight with Woodley.

First, Jake announced his intention to try his hand at MMA and train at the American Kickboxing Academy under the guidance of ex-UFC champion and ex-mentor of the Russian Javier Mendez, and then expressed a desire to measure his strength with Khabib.

Nurmagomedov did not comment on his possible duel with Paul, but instead invited him to perform in his Eagle FC promotion.

Subsequently, he even stated that he sent the contract to him, but Paul could not confirm this.

“Khabib said: “We offered him a deal.”

It is not true.

They never offered me anything.

Eagle FC hasn't even held any tournaments before.

I don't feel bad about what they do, but to venture into MMA right now, I need more money than I make in boxing.

People would have to pay $25-35 million just to start talking to me (about this. -

Thus, the blogger tried not only to attract the attention of the public, but also to remind once again how much the fees differ in boxing and MMA.

At the moment, it is not known how much the participants in the first ever American Eagle FC tournament were paid.

But against the background of their counterparts from the oldest type of martial arts, the numbers will certainly look more than modest.

Suffice it to recall that Francis Ngannou and Cyril Gun, who fought for the UFC heavyweight title, earned $ 1.1 million for two.

And in the promotion of Nurmagomedov, the level of salaries is hardly higher.

You should not hope that Paul will be offered such money in at least one of the existing MMA promotions.

Theoretically, he could receive comparable amounts in the UFC, taking into account all kinds of bonuses and a percentage of the sale of paid broadcasts, but the conflict with White makes his performance in the Ultimate Fighting Championship impossible.

In addition, although the championship pays a lot of attention to the media component, it mainly specializes in fights with the participation of professionals.

Yes, you can remember the story of CM Punk, who signed with the UFC in 2014.

In the US, wrestling is one of the most popular forms of entertainment, and bringing in one of its biggest stars could help expand the audience of mixed martial arts fans.

It is difficult to say how significant the dividends from this cooperation were, but Phillip Brooks (the real name of the athlete) was paid far from record fees.

For battles with Mickey Gal and Mike Jackson, he received about $ 1 million.

But even if we discard the financial component, the fight with Paul does not make any sense for Nurmagomedov.

The Russian recently retired from a colorful career in MMA, went down in history as one of the most dominant champions in the history of the sport and earned enough to buy his own promotion.

In this regard, he is fundamentally different from the former opponents of the blogger - Askren and Woodley.

Both, although they were respected fighters, were written off at the time of the meeting with Paul.

Ben had only three fights in the UFC, two of which he lost devastatingly, and Tyrone's career went downhill after losing to Kamaru Usman in a title fight.

Subsequently, he lost three more times (two times ahead of schedule) and lost his place in the elite.

Yes, as a former champion, he made good money ($690 thousand for three fights according to Sportsdaily), but the fight with the blogger promised to bring more.

By and large, Askren and Woodley had nothing to lose in the fight with Paul, because by this point their track records were already far from ideal.

In addition, they fought according to the rules of another sport, which also partially justified them in the event of a fiasco.

Therefore, both without a twinge of conscience and decided to exchange the remnants of the heritage for a big check.

According to the media, Tyrone received a total of $ 3 million (excluding interest from PPV), and Ben - $ 500 thousand.

It is strange to think that Nurmagomedov will follow in their footsteps.

And it's not just about his stable financial position, a growing business and an ideal track record that he may be afraid to risk.

Khabib repeatedly emphasized that for him the sports component comes first, and not the hype, which he confirmed.

Otherwise, he would have fought Conor McGregor more than once, thanks to which he got rich by another ten million dollars and along the way set a UFC record for selling paid broadcasts.

But even if Nurmagomedov had forgotten about the principles for a while and accepted the challenge of Paul, the duel would hardly have turned out to be at least a little competitive.

It is clear that after a couple of victories in the boxing ring, Jake feels ready to move mountains, but in mixed martial arts it will be much harder for him to prove himself than in boxing.

To do this, it is not enough for him to learn wrestling and jiu-jitsu.

You need to learn how to combine all the skills together and be ready to fight both on your feet and on the ground.

Nurmagomedov himself is sure of this.

On the Full send podcast, he stated that Paul still had a lot to learn and emphasized that Jake would not last even a couple of minutes in a battle with him.

We must not forget about another aspect.

Despite the statements of both Paul himself and his former opponents, many in the sports community considered his fights with Askren and Woodley to be fixed.

Many could not believe that professional fighters suddenly forgot about protection and made blunders in the battle with a blogger.

Of course, there is no evidence that the outcome of Paul's fights with Askren and Woodley was known in advance.

But if you imagine that the blogger managed to somehow persuade the former champions to succumb to him, in the case of Nurmagomedov, one cannot count on such a thing.

Khabib will certainly not decide to spoil his legacy for the sake of a few million and will enter the cage extremely collected and motivated.

And Paul is unlikely to succeed in coping with such an opponent.

After all, neither the aforementioned McGregor nor other lightweight stars have been able to do this before.

It is clear that it was the ability to create a stir around himself that helped Paul earn millions and become first a profitable blogger, and then a popular boxer.

However, there is a limit to everything.

At this rate, he may run into an opponent who is too strong and motivated, after meeting with whom his career will come to an end.