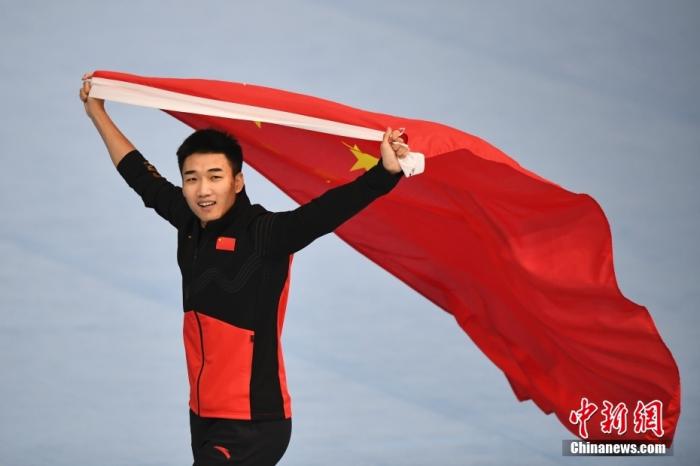 The Chinese Legion has created the best record since participating in the Winter Olympics, and they are also making history by constantly surpassing themselves.

Speed ​​skating is known as the "mother of ice skating", and the intensity of the men's 500m is comparable to the track and field 100m "Flying Man".

Gao Tingyu made history again and again in this event that was difficult for Chinese players to enter. Pyeongchang won the bronze medal and became the first Chinese man to win the speed skating Winter Olympics medal; Beijing won the gold medal and rewrote China's record in breaking the Olympic record. The history of the men's gold medal in speed skating at the Winter Olympics.

If Zhang Hong won the women's 1000m champion in the 2014 Sochi Winter Olympics, China has achieved three major breakthroughs in the three consecutive Winter Olympics, and the progress of the Chinese speed skating team is the embodiment of "China's speed".

The picture shows Xu Mengtao celebrating at the ceremony of awarding souvenirs.

From the runner-up in Sochi to the champion in Beijing, Xu Mengtao spent 8 years changing the silver medal in the individual event to a gold medal; for the Chinese women's aerial skills team, this gold medal has been waited for 24 years.

After realizing her dream and looking back, she thanked many people, and also thanked herself for not giving up.

On the same day, the awarding ceremony of the women's U-shaped field skills medals for the freestyle skiing of the Beijing 2022 Winter Olympics was held in the award square of Zhangjiakou Division.

With two golds and one silver, talented ski girl Gu Ailing made her "epic name" when she first entered the Winter Olympics - she was the first athlete to win medals in three different freestyle skiing events at the Winter Olympics.

In the Winter Olympics, it is not only her achievements that make Gu Ailing stand out.

Wearing ski suits embroidered with golden dragons, on skis with the words "Dragon among people" on her feet, eating leek boxes at equal intervals, and comforting her opponents after winning the championship, her every move is highly sought after because people see a champion The players have a rich, three-dimensional and diverse image.

The picture shows Su Yiming after the souvenir ceremony.

Although he and Gu Ailing are friends of the same age, Su Yiming did not attract as much attention as his childhood friend before the game, and people's impression still remains on the "Little Shuan" he once played.

On the podium, whether winning the championship or picking up silver, this 18-year-old teenager laughed in the sky and became a touching scene at the Winter Olympics.

He respects his opponents and responds generously to the controversy of "being given a low score by the referee"; he challenges himself and keeps hitting the gold medal with difficulty.

He said an eternal truth in a childish tone - "Everything can be expected, and my efforts will not fail me."

In the short track speed skating mixed team relay final that ended on the evening of February 5, the Chinese team consisting of Wu Dajing, Ren Ziwei, Fan Kexin and Qu Chunyu took the lead in crossing the finish line, winning the first place for the Chinese sports delegation in this Winter Olympics. gold medals.

The picture shows Wu Dajing (left) celebrating after the game.

After another four years, he led his team to win the mixed relay gold medal and won the first gold medal of the Chinese sports delegation at this Winter Olympics.

In his words, he "played a sample" for the Chinese sports delegation.

What is moving is that after the physical strength declined in the men's 1000m final, Wu Dajing chose to help Ren Ziwei to get stuck, and touched Ren Ziwei's hand to signal him to go first.

Wu Dajing said that he wants to be "the one who gives the players a sense of security". As long as the national team needs it, he will be called at any time.

This is Wu Dajing's two consecutive Winter Olympics gold medals, and it is also the first time that Ren Ziwei, Fan Kexin, Qu Chunyu and Zhang Yuting have reached the Olympic champion podium.

Along with Wu Dajing, he is a veteran of the three dynasties, but Fan Kexin's journey to the Winter Olympics is even more bumpy.

The tears of the past were finally resolved at the Beijing Winter Olympics. She won the coveted gold medal and led the Chinese women's team to the relay podium again after 12 years.

She also shed tears at the Beijing Winter Olympics, but this time she has no regrets.

At the moment of leaving the ice rink, Fan Kexin leaned over and kissed the ice surface, which became a lingering emotional scene for many people.

When the outside world interpreted this as her farewell to the short track speed skating arena, the veteran called it a "start".

She hopes that the little sister next to her will take the baton and continue to rush forward, but as long as short track speed skating needs her, she will always stand on the ice.

In the men's 1000m short track speed skating final at the Beijing Winter Olympics on the evening of February 7, Chinese player Ren Ziwei took the lead in hitting the line and won the championship.

The other two Chinese players Li Wenlong and Wu Dajing who entered the final ranked second and fourth respectively.

As the most outstanding Chinese short track speed skater in the Beijing cycle, Ren Ziwei lived up to his responsibilities at the Winter Olympics and was crowned the "Double Champion", becoming the first Chinese male athlete to win two gold medals in one Winter Olympics .

Just like his nickname "The Elephant", Ren Ziwei has a lot of momentum both on the field and in training.

In the last lunar year of the tiger, Chinese pair skating duo Shen Xue/Zhao Hongbo won the Vancouver Winter Olympics in one fell swoop, winning the first ever gold medal in figure skating for the Chinese team.

Now their apprentices Sui Wenjing/Han Cong have replicated their brilliance and fought back against the odds under the "siege" of the Russian-Olympic team, winning gold from the "tiger's mouth".

People were moved, not only was the "Sui and Han Combination" in the finals making a difficult move "twisting around" that other contestants had not yet fully mastered, but also the two people's personal experience of supporting each other and weathering the storm together was turned into every detail. Emotional interpretation.

The gold medal won by "Tiger" will moisten things silently and nourish the future development of Chinese figure skating.

On February 16, Chinese player Qi Guangpu was in the game.

On the same day, the freestyle skiing men's aerial skills final of the Beijing 2022 Winter Olympics was held in the Zhangjiakou Division. Chinese player Qi Guangpu won the championship.

The same veteran of the four dynasties, and also the king of difficulty, Qi Guangpu won the championship with an absolute advantage. After 16 years, the Chinese men's aerial skills team finally reconnected with the Winter Olympics gold medal.

From the first gold medal in the Chinese Winter Olympics to the 16-year absence of the highest podium, generations of aerialists have endured hardships and ups and downs.

At the Beijing Winter Olympics, Qi Guangpu and Xu Mengtao made new history with difficult jumps again and again - the Chinese aerial skills team won the gold medal in the men's and women's Winter Olympics for the first time.

"Ace on the Snow", finally blooming.

On February 11, the men's bobsleigh competition at the Beijing Winter Olympics ended. Chinese athlete Yan Wengang won the bronze medal with a time of 4:01.77 in four rounds, creating the best result in the history of Chinese players in this event. .

Although 24-year-old Yan Wengang won a bronze medal in "Snow Dragon", he has achieved a major breakthrough in snow sports in China - this is the first steel frame snowmobile medal won by a Chinese player at the Winter Olympics. .

You must know that the China Steel Frame Snow Team has only been established for just 7 years, and Yan Wengang is also a player who came from the long jump and cross-border.

Standing on the Olympic stage for the first time and winning the bronze medal, Yan Wengang filled another gap in China's ice and snow sports, and also let the world see China's "steel speed".