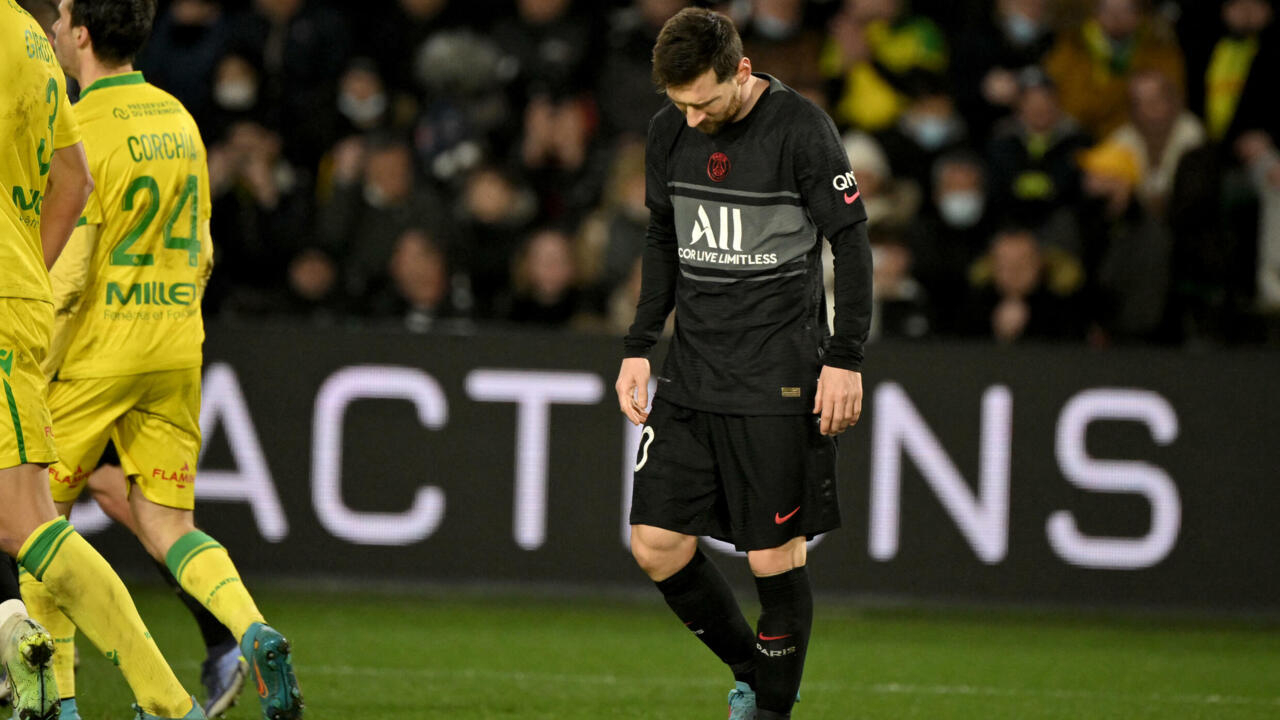 Ligue 1: PSG and OM surprised by Nantes and Clermont

PSG, broad leader of the French championship, and OM, its runner-up, both lost.

Marseille, surprised at home by the promoted Clermont, saw their second place threatened by their pursuers.

A deserved success for the Auvergne club, which scored through the Guinean Mohamed Bayo (13th), author of his 10th goal in Ligue 1, and the Gabonese Jim Allevinah at the end of the match (84th).

Clermont takes valuable points in the maintenance race and now has a six-point mattress on the red zone.

This stagnation of Marseille (46 pts) does the business of Nice (45 pts), which beat Angers after two defeats in a row in L1 and rejected the threat of Strasbourg (42 pts) by three lengths.

The Aiglons won thanks to an opportunistic goal from Justin Kluivert (19th) and Angers, beaten for the fourth time in a row in L1, failed to react.

Despite their Messi-Neymar-Mbappé trio lined up from the start, Paris SG lost heavily to Nantes 3-1 on Saturday, their second defeat of the season in Ligue 1, appearing unrecognizable four days after their European performance against Real. Madrid.

Before tonight, PSG had never trailed by 3 goals at half-time in a Ligue 1 match under the Qatari era.

Bundesliga: Bayern are reassured, Dortmund and Leipzig are a hit

With braces from Lewandowski, Reus and Nkunku, Bundesliga leaders Munich, Dortmund and Leipzig scored 16 goals between them on Sunday: Bayern remain in the lead with a six-point lead over Dortmund.

Leverkusen are still third at 14 points, after their 3-2 defeat at Mainz on Friday, and Leipzig fourth and last qualified for the Champions League, 18 lengths from the leader.

Of the three big arms of German football, Bayern was the poorest: 4-1 "only" to beat bottom-runner Fürth, and even then the score is really flattering for the defending champions, who were down 1-0 at the home break.

The main thing was not there, however, for the Bavarians who needed to reassure themselves after the slap in the face in Bochum (4-2) last week and the difficult match against Salzburg in the Champions League (1-1).

Liga: Real, Barça and Atletico are full of confidence

Brilliant FC Barcelona crushed Valencia CF 4-1 on Sunday for the 25th day of La Liga, and overtook Atlético Madrid, winner of Osasuna 3-0 on Saturday, to regain the qualifying places for the Champions League.

A necessary boost of confidence for the Catalans, with a view to the Europa League, where they will have to eliminate Naples on Thursday.

Earlier in the day, Sevilla FC, Real Madrid's first pursuer (leader with 57 points), stumbled on the lawn of Espanyol Barcelona (1-1).

Four days before their own shock against Manchester United in the round of 16 first leg of C1, Atlético Madrid dominated Osasuna 3-0 on Saturday for the 25th day of La Liga.

Much better preparation than the surprise midweek loss to bottom-run Levante.

Four days after losing 1-0 in Paris;

Serie A: difficult weekend at the head of the peloton

Weekend to forget for the tenors of Serie A: after the draws of Juventus and AC Milan, Inter and Atalanta were beaten on the 26th day, which could benefit Napoli on the road to Cagliari on Monday.

If successful in Sardinia, the Neapolitans, currently third three points behind Milan, could even become leaders.

After AC Milan's misstep on Saturday at Salernitana (2-2), the head reached out to Inter.

But Simone Inzaghi's team missed out on their home match against Sassuolo (2-0), a mid-table team.

Manchester City beaten on Saturday at home by Tottenham (3-2) on a double from Kane, Liverpool who come back to six points, with one more match to play: the English championship is completely revived on the occasion of the 26th day .

The Citizens were surprised by the Spurs (7th), carried by Harry Kane, author of a double, including the winning goal in added time of a crazy match.

Pep Guardiola's team sees an end to their invincibility, which had lasted since November 6.

But above all, the championship leader sees Liverpool come back to within six points.

A week after winning the Club World Cup against Brazilian club Palmeiras (2-1 after extra time), the Blues were content with the bare necessities at Crystal Palace.

Left behind in the title race with sixteen points behind Manchester City at kick-off, Thomas Tuchel's players delivered a fairly ordinary copy and only made the difference at the very end of the match thanks to Hakim Ziyech ( 89th).

Arsenal for its part won logically against Brentford (2-1), and thus took its revenge after the defeat of the first leg, during the very first day and the first match of the promoted in the Premier League.

Sixth with a point behind Manchester United, the Gunners are more than ever in the race for qualification for the Champions League.

At Olympique de Marseille, some things are never done halfway.

For the reception of Clermont Foot, the Marseille club had expressed its desire to honor Pape Gueye and Bamba Dieng, crowned African Champions with Senegal.

It's done and big.

In a Velodrome filled with no less than 52,000 spectators, the South Winners deployed a gigantic tifo in Senegalese colors at the level of the South Bend stand.

The magnificent welcome at the Vélodrome for Pape Gueye and Bamba Dieng, recent CAN winners with Senegal!