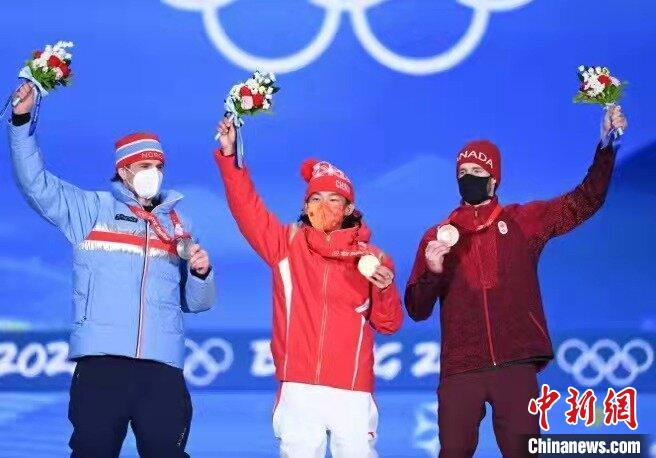 Beijing Awards Plaza is an important non-competition venue for the Beijing Winter Olympics. Since its operation on February 6, it has experienced 14 awards days, held a total of 30 award ceremonies, and presented medals to more than 150 athletes from 17 countries. , Chinese players received a total of 5 gold medals, 1 silver medal and 1 bronze medal in Beijing Awards Plaza.

Among the winners at the award ceremony at the Beijing Awards Plaza is Su Yiming, the gold medal winner of the men's big platform jumping in snowboard.

During the operation period, Beijing Awards Plaza and Zhangjiakou Awards Plaza alternate for global live broadcasts every day. The two brother venues are closely connected and closely matched to jointly present a simple and wonderful award ceremony to the world.

According to reports, in order to ensure the perfect presentation of the award ceremony, the etiquette team responsible for awarding awards on the stage has been screened and trained layer by layer, and spent nearly a year of rigorous training. Every action of walking, guiding, and end plate, strives to be beautiful and precise.

A warm-up performance at the Beijing Awards Plaza.

The Beijing Winter Olympics coincides with the Chinese Spring Festival. In order to create a festive atmosphere of festive reunion and convey traditional Chinese culture and the Olympic spirit, the Beijing Awards Plaza has different warm-up programs every day.

For example, "2022 to Beijing" performed by the band, fully mobilized the atmosphere of the scene with a cheerful and enthusiastic rhythm, leading the audience to sing and dance together; with the creative landscape Tai Chi program, Yang Dezhan, a young martial artist who appeared on CCTV's Spring Festival Gala of the Year of the Tiger in 2022, was invited as a special guest The guests made their first performance of "Chinese Kung Fu" at the Beijing Awards Plaza, allowing the audience to appreciate the charm of traditional Chinese martial arts; the song and dance performance "Together to the Future" conveyed the call for building a community with a shared future for mankind...

After the award ceremony, there will be a beautiful light and shadow show.

The award plaza is one of the main cultural features that distinguish the Winter Olympics from the Summer Olympics.

As one of the main venues and exhibition venues for the award ceremony of the Beijing Winter Olympics, Beijing Awards Plaza, with its unique functional orientation, shoulders the heavy responsibility of spreading the Olympic spirit, presenting the highlight moments of athletes to the world and highlighting the unique charm of Chinese culture. .

The raising ceremony of the award plaza.

The stage of the Beijing Awards Plaza is named after "beauty and beauty", and the creativity comes from the visual element of "snow house", which has both ice and snow characteristics and the temperature of "home", which symbolizes that Beijing takes the Winter Olympics as an opportunity to invite guests from all over the world to spend reunion together. The full sincerity of the Chinese New Year reflects the beautiful vision of the global human family living in harmony and harmony.

As the only operation team to switch venues during the transition period, after the Winter Olympics, the Beijing Award Plaza operation team will fully move to the Yanqing Winter Paralympic Award Plaza to provide a full range of barrier-free services such as facilities, exchanges, and operations.

It is reported that the Yanqing Winter Paralympics Awards Plaza will invite artists from the China Disabled Persons' Art Troupe to give a wonderful warm-up performance. Combined with the characteristics of the Winter Paralympic Games, it will show the optimistic, confident and high-spirited outlook of the disabled, with vitality and imagination. The performance of power pays tribute to Winter Paralympic athletes from all over the world (regions), and sings praises for strength and dreams.