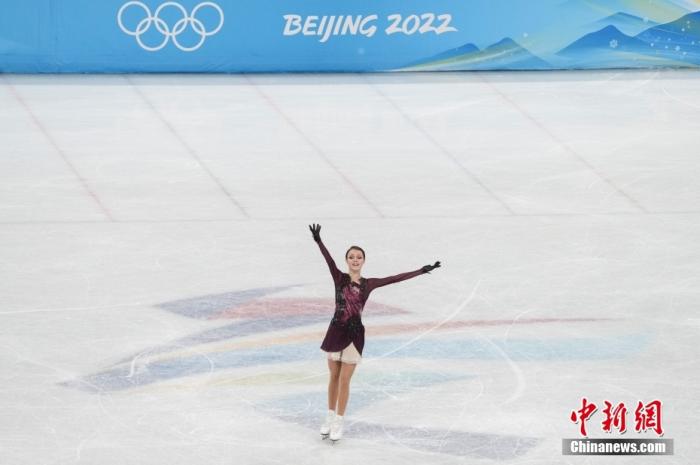 Eteri Tutberidze, the coach of the Russian Olympic Committee, was the busiest person in the arena in the final moments of the women's figure skating free skating competition at the Beijing Winter Olympics.

At about 21:00 on the 17th, the last group of 6 players in the game warmed up on the ice, and Tut Rize, who was waiting on the sidelines, took the team uniforms that 3 players took off in turn and waited for the opportunity to tell them a few words.

Beginning at 21:25, she first "Supervisor" Trusova performed 5 "quad jumps" in a set of free skating, and then witnessed Sherbakova's unparalleled artistic expression to win the house, and finally witnessed the tile. Lieva made repeated mistakes.

Seeing her apprentice who had won the team championship and made great contributions to the ice rink, she rushed over and asked, "Please explain to me why it collapsed after jumping from Axel."

It's hard to ignore Tutreidze's presence.

She is tall, loves fur coats, and has long curly hair that looks like "instant noodles".

Due to the requirements of epidemic prevention, she has been wearing a mask in the Beijing stadium.

Born in 1974, Tutreidze began to practice figure skating at the age of 4. He retired early due to injuries. When he was young, he moved around to make a living. Later, he taught in Moscow's "Crystal" figure skating team.

Although she herself has never won a world championship, she is recognized as the "Snow Queen" by the Russian sports community.

According to incomplete statistics, before the Beijing Winter Olympics, in just 8 years, the Tutreze team had cultivated at least 2 Olympic champions, 3 world champions and 5 European champions.

However, from the rivalry between the "Double Dolls" four years ago to the current battle of the "Matryoshka" group, the huge controversy has always revolved around Tutreze.

For example, one of her secrets to success is "designing shows strictly according to the new rules."

In recent years, figure skating has adopted a complex scoring system, and Tutreidze's team has already started "scoring" when many coaches still don't know how the scores add up.

The new rules give extra points to the "footwork connection", and the coaching staff asked Lipnitskaya to add leg-pulling movements that can demonstrate her flexibility before and after each jump, even if the program was criticized for being blunt.

The new rules also propose bonus points for jumps in the second half, a move originally intended to balance the show's "top-heavy".

Unexpectedly, Tutd Rize simply put all the jumps in the second half of the program when choreographing for Zagitova, so that the International Skating Federation urgently "suspended" this speculative behavior after the PyeongChang Winter Olympics.

From Lipnitskaya, the youngest gold medalist in the history of the Winter Olympics, to the "matryoshka" who has swept across the major arenas, they all have in common that they are young, well-behaved and hard-working.

In the eyes of critics, these girls are nothing more than "products" of the "underage beautiful girl figure skating robot factory" in Tutreze, and will be "scrapped" after the Olympics.

For example, Zagitova, who witnessed the "coronation" of her junior sister in Beijing this time, announced her departure from the arena at the age of 17 as early as the end of 2019.

The external statement is "lack of competition motivation", but in fact, everyone with a discerning eye knows the helplessness.

Another example is Lipnitskaya. In recent years, most of the reports about her have been about how the former "genius girl" struggled with anorexia.

Tut Rize's harsh behavior towards the players is even more controversial.

A documentary filmed by Russian TV revealed that Medvedeva would always fall at the beginning of learning the "triple jump". If you like to fall so much, I'll let you fall enough", dragging on until the girl cramped and called to stop.

The coach also especially likes to create a competitive atmosphere.

On the evening of the 17th in Beijing, Tutreidze not only rebuked the extremely frustrated Valieva, but also cried "I don't want to go on the ice anymore, I hate this sport" after the defeat. Sowa, she just patted the disciple's shoulder without changing her face.

The Russian Olympic Committee team that came to Beijing this time also included Tutreidze's daughter, Diana Davis. The ice dancer and her partner only finished 14th.

According to reports, Diana, who had high hopes from her mother since she was a child, had to go to the ice even with a high fever, and also cried hysterically on the field.

In any case, the splendid "record" of the Tutreze team added another.

After Shcherbakova won the championship, the Kremlin sent congratulations, which specifically mentioned the credit of the coaching team.

But they can't celebrate just yet.

The International Court of Arbitration for Sport (CAS) released relevant information about Valieva's "doping incident", which made it clear that Valieva's test sample was positive, and the banned substance detected was trimetazidine. "Mistake" while taking care of grandfather.

"No stimulants will help players learn to 'quad', nor will they improve their posture, graceful movement and ability to express musical compositions." Tutreidze once said, and firmly believes that "the ability to investigate everything and make Fair Judgment".

Russian figure skating legend Plushenko spoke out on this, believing in the innocence of coaches and athletes, but to break the "hegemony" of the Tutreidze group.

Amid the controversy, the "Ice Queen" continued to go far away.

Those flower-like girls have left countless tears on the ice rink.