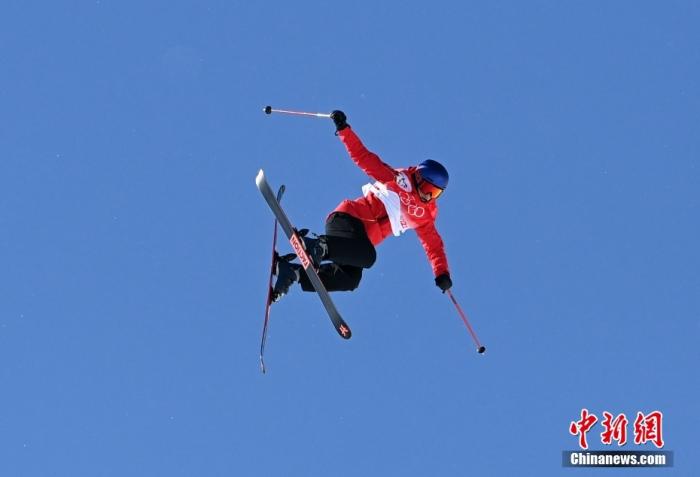 China News Service, Beijing, February 14 (Reporter Wang Zumin) For Chinese audiences, the Beijing Winter Olympics on the 15th is highly anticipated. Two new stars of the Chinese delegation, Gu Ailing and Su Yiming, will compete for the gold medal on the same day.

The picture shows Gu Ailing in the game.

Gu Ailing competes with Su Yiming for the first gold

On the 15th, the freestyle skiing women's slope obstacle course final and the snowboard men's big platform final will usher in the second gold battle between Gu Ailing and Su Yiming respectively at this Winter Olympics.

In the qualifying rounds, the two teenagers advanced to third and fifth respectively.

At last year's World Championships, Gu Ailing won the women's slope obstacle skills championship. In this season's World Cup competition, she has swept almost all the gold medals in this event.

If she plays normally in the final, Gu Ailing should be able to win the second gold as she wishes.

The picture shows Su Yiming in the game.

After winning the runner-up in snowboarding slope obstacle skills, Su Yiming, who was under 18 years old, became a blockbuster, but he did not know that the big snowboard platform was the real strength of this teenager.

Before that, he also successfully completed the internal rotation 1980 (five and a half weeks of rotation), becoming the first person in the world to unlock this difficult movement.

In the final on the 15th, whether Su Yiming can win his first Winter Olympic gold medal is a big suspense, and whether he will show 1980 is also a big spectacle.

There will also be a gold medal for the women's platform jumping on the snowboard arena on the same day.

As the first person in China to advance to the Winter Olympics final in this event, the 19-year-old Jung, who was ninth in the qualifying round, will strive to achieve another success.

The ace on the snow is on the road again, and the youngest player looks forward to the final

On the 15th, the freestyle skiing field will also hold the men's aerial skills qualifying competition. In this ace of the Chinese snow sports, the Chinese team with full seats will send a luxurious lineup. Jia Zongyang, Qi Guangpu, Sun Jiaxu and Wang Xindi are all world leaders. champion.

In this season, Sun Jiaxu and Wang Xindi also won the World Cup championships, which greatly enhanced the competitiveness of the Chinese team in this event.

Whether the four generals of the Chinese team can advance to the finals has become the biggest attraction in this qualifying match.

He Jinbo, the youngest player of the Chinese delegation in this Winter Olympics, will make another appearance in the freestyle skiing men's slope obstacle course on the 15th.

In the freestyle ski jumping competition, the 17-year-old boy stopped the qualifying round and hoped to enter the final.

The women's single skating short program will be held on the 15th in the figure skating arena.

The competition for medals in women's figure skating is basically a civil war of Russian dolls. Among them, 15-year-old Valieva, who holds three world records in short program, free skating and total score by a great advantage, is the biggest favorite to win the championship. .

A few days ago, Valieva was involved in a doping incident and her eligibility for the competition was in doubt.

On the 14th, the International Court of Arbitration for Sport decided to allow Valieva to participate in the Winter Olympics-related competitions.

But whether this incident will affect Valieva's performance in the single game has become a major attraction of the event.

Due to his poor performance in the team competition, the 19-year-old was once controversial.

This time in the individual competition, I hope Zhu Yi can adjust his mentality and play his best level.

At present, the Chinese men's and women's curling teams are both 2 wins and 4 losses. If you want to enter the semi-finals, not only can you not lose, but you also need to look at the faces of other teams.

Men's ice hockey will proceed to qualifying rounds for the quarterfinals.

After the group stage, the US team, the Russian Olympic Committee team, Finland team and Sweden team took the lead to advance to the top 8, and the other 8 teams will compete for the other 4 top 8 seats.

The Chinese team will face the world powerhouse Canada team.

In the group stage, the Chinese team lost 0:5 to their opponents, and this time there is little hope of winning.