Today, the 15th round of the ADNOC Professional League is witnessing a very important battle between Ajman and its guest Shabab Al-Ahly, while Al Ain will have to avoid any surprises from its host Emirates team, while Al-Uruba and its guest Al-Nasr will meet with a strong desire from the two teams to win and reconcile their fans. Ajman suffered in the 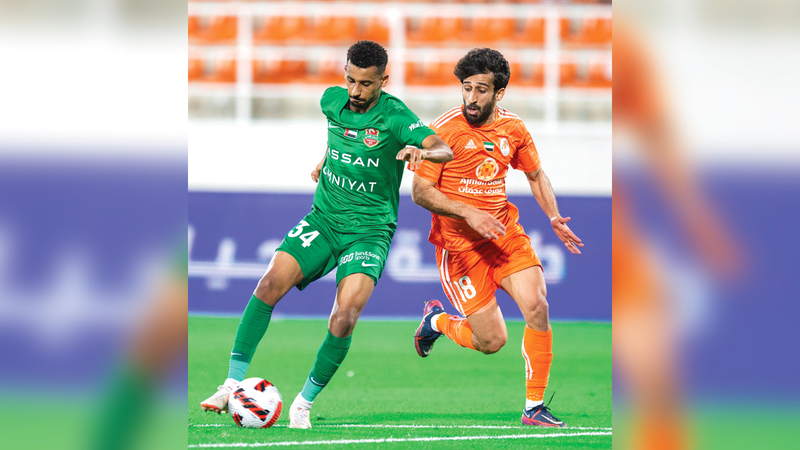 The "leader" is looking forward to point 36... and victory to correct the path in front of Arabism

Today, the 15th round of the ADNOC Professional League is witnessing a very important battle between Ajman and its guest Shabab Al-Ahly, while Al Ain will have to avoid any surprises from its host Emirates team, while Al-Uruba and its guest Al-Nasr will meet with a strong desire from the two teams to win and reconcile their fans.

Ajman suffered this season the knot of repeated loss against Al-Ahly youth, and it will be the fourth time for him to untie the knot.

Ajman had lost in the three matches, first leg in the league, with a goal without a response, and in the League Cup matches (2-1 and 1-0).

Ajman suffers from the absence of the trio: the Brazilian Leonardo, Saeed Suleiman: and Saeed Jassem, who are loaned from Al-Ahly youth, due to the terms of the loan, while the Gambian Abu Bakr Trawali restores what constitutes an offensive force with the Tunisian Arab and Moroccan Walid Azzaro.

Despite the absence of six players from Al-Ahly youth, the coach, Mahdi Ali, is betting on the team's strength and experience to reach point 29 and stay in the competition cycle.

• "Al Fursan" won the three confrontations with "Orange" this season (in the first leg of the league and in the two matches of the League Cup).

“The Hawk” dreams of a surprise

The Emirates team dreams of achieving a new surprise under the leadership of Egyptian coach Ayman Al-Ramadi, in front of Al-Ain, after he had previously succeeded in stopping the Sharjah team after a 2-2 draw with him, and also achieved a victory over Ajman, on the way to correction.

The Emirates team is betting on the second round to escape the danger of relegation, as it occupies last place with five points.

On the other hand, the match is another opportunity for Al Ain to get closer to the league title and enhance the lead it currently occupies with 33 points.

The leader enters the match after a comfortable victory in the last round over Khorfakkan, in light of the brilliance of his star and top scorer in the Togolese League, Laba Kodjou, and Moroccan Sofiane Rahimi.

A “lifeline” for al-Abidi or Rabie

Al-Uruba's attempts to escape from the specter of relegation are renewed, when it receives victory. Today's victory may be considered a lifeline for its coach, Tunisian Fathi Al-Obeidi, as well as an opportunity for the new coach of Al-Nasr, Salem Rabie, to prove his worth under the leadership of Brigadier General.

Al-Uruba lost from Al-Wehda 4/2 in the last round, making its position worse in the penultimate position with eight points, while Al-Nasr received a loss at home from Ajman that caused the departure of Argentine coach Diaz and Salem Rabie took his place, where the team now has only 18 points.

“Al-Uruba” usually poses a difficulty in front of the big teams, although the experience does not help him to achieve the results he desires.