The Dubai Arabian Horse Stud announced in a statement that it achieved a record value at the Katara Arabian Horse Auction, which was held in the Qatari capital, Doha, the day before yesterday, by selling the global mare’s egg produced by many champions “FT Sheila”, the daughter of the champion “Shail Dream” Desert" and the Persians "Sol .". 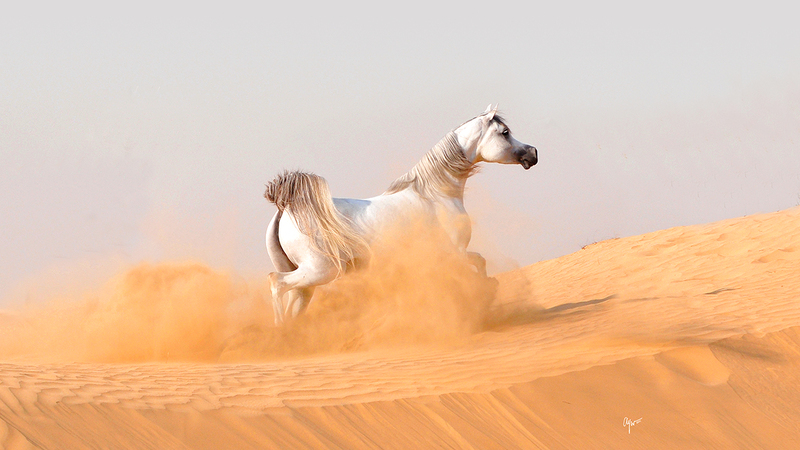 The Dubai Arabian Horse Stud announced in a statement that it achieved a record value at the Katara Arabian Horse Auction, which was held in the Qatari capital, Doha, the day before yesterday, by selling the global mare egg produced by many champions “FT Sheila”, the daughter of the hero “Shail Dream” Desert" and the mare "Sol Bertie TGS", with an amount of 3.2 million Qatari riyals (about 3.23 million UAE dirhams), which is the highest price for an egg of purebred Arabian mares in the world.

The General Supervisor and Director General of Dubai Stud, Engineer Mohammed Al-Tawhidi, expressed his happiness with the achievement.

He said in a press statement, "It is an explicit indication of the special status of the Dubai Stud, which has not stopped recording major goals in a production that today leads a world-class quality, which was established for its achievement 15 years ago by order of the Arab Knight and the world and the sage of the local production of purebred Arabian horses, His Highness Sheikh Mohammed bin Rashid Al Maktoum, Vice President and Prime Minister of the UAE and Ruler of Dubai, may God protect him. His Highness embodied the dream of the UAE and its founder, Sheikh Zayed bin Sultan Al Nahyan, may God rest his soul, when he made the Arabian horse a strategic issue among the strategies for advancing the future.

He added that "the mare FT Sheila was one of the solid building blocks in establishing the production of the Dubai Stud, which proved its global strength, and it is still, thanks to God, a generous incubator and a distinguished source in the industry of champions, and the development of Arabian horse production everywhere in the world, and it deserves this celebration with its special value, Just as Al Thumama Stud deserves to be the distinguished celebrant of the Jewel of the Persians (FT Sheila).

Congratulations to Al Thumama Stud for its authentic trust, and our best wishes to Nabil Ali bin Ali and Dana for success in the stud’s journey towards achieving the greatest achievements that fit its loyalty to the cause of Arabian horses, developing them and deepening their quality.”

In turn, the Executive Director of the Dubai Stud, Abdulaziz Al-Marzouqi, said: “The Katara auction has embodied the heightened interest of the Gulf in developing purebred Arabian horses globally, and the Gulf studs have the right to preserve the most beautiful production they have, which confirmed its heroic imprint in the world.

(FT Sheila) is not any champion mare, but rather a multi-world heroic achievement, the mother of many world champions, and is considered a milestone in making the glories of the best stud in the world.”

Al Marzouki added: “All the pillars of production in the Dubai stud, from stallions and mares, are today pillars of the global production of purebred Arabian horses.

The field is still open for all those interested in developing their production to obtain distinguished imitations and high-quality horses, which the stud places at their choice to serve their paths in developing their production, and their achievements at levels that make them more unique, and enable them to re-role that the Dubai stud worked to play, and the participation of distinguished studs. in deepening it.