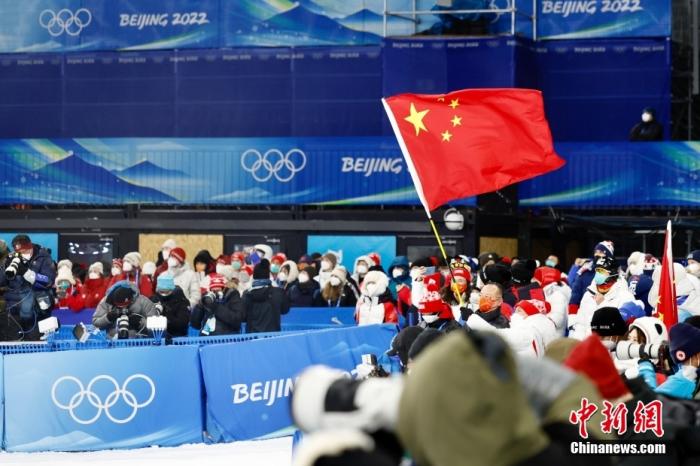 China News Service, Beijing, February 10 (Reporter Wang Zumin) The Beijing Winter Olympics produced 8 gold medals on the 10th. The Chinese Army Corps did not receive any gold for two consecutive days, and only won one silver medal in the snow sports events that were highly anticipated by Chinese audiences that day. .

The picture shows the Chinese team's coaching staff cheering from the sidelines.

In the freestyle skiing aerial skills mixed team competition and the women's snowboard U-shaped field skills competition held on the 10th, the Chinese team is one of the favorites to win the championship. The two Chinese teams gathered five "four dynasties veterans" of the Winter Olympics.

For the first time, the mixed team of freestyle skiing and aerial skills has become an official event of the Winter Olympics.

In the first round of the 6 teams that night, the three Winter Olympics "four dynasties veterans" of the Chinese team took the lead and entered the final round with the first total score.

Unfortunately, in the second jump of the final round, Jia Zongyang made a mistake. Fortunately, Xu Mengtao and Qi Guangpu, who played in the first and third rounds, both played well and saved a silver medal for the Chinese team.

In the women's U-shaped field skills final of snowboarding, the Chinese team is also led by the "old veterans of the four dynasties".

However, the Chinese team, which was double-insured by Cai Xuetong, the 7-time World Cup annual champion and Liu Jiayu, the silver medalist at the last Winter Olympics, missed the medal.

The defending champion and American star Chloe King jumped out of the first round with a high score of 94 points, and finally achieved two consecutive Winter Olympics with this result.

With the rise of the national tide, Chinese traditional culture also has a "home field advantage" in the international arena.

The much-loved and watched figure skating men's single skating has a new king on the 10th.

China's Jin Boyang, who finished fourth in the PyeongChang Winter Olympics, achieved his best results of the season in both the short program and free skating. Although he was ranked ninth due to numerous strong players, he has tried his best to do his best. As far as there is no regret.

On the 10th, the figure skating men's singles field of the Beijing Winter Olympics witnessed the tragic Olympic performance of Yuzuru Hanyu, a popular star. He challenged Axel to quadruple jump (4A) unsuccessfully and fell twice during the competition. , and finally ranked fourth with a single skating 188.06 points and a total score of 283.21, missing the third consecutive championship.

The speed skating arena is still going through a record-breaking "series".

In the women's 5000m final on the same day, Dutch star Schouten, who won the first gold in speed skating at the Winter Olympics, won the second gold in 6:43.51, breaking the Olympic record again.

Since this Winter Olympics, there have been 5 finals in the speed skating arena, all breaking the Olympic record.

Among them, Yan Wengang's score of 2:01.08 was 0.75 seconds behind the first-ranked German star Christopher Grothel, and only 0.05 seconds away from the second place. Great hope.

On February 10, the second round of the men's curling round-robin competition at the Beijing 2022 Winter Olympics was held at the "Ice Cube" at the Beijing National Swimming Center. The Chinese team lost 4:7 to the Russian Olympic Committee.

The picture shows the players of the Russian Olympic Committee throwing a pot.

The Chinese steel frame snowmobile national team was established in 2015. Most of the players are from cross-border selection. Yan Wengang and Yin Zheng were both track and field athletes before.

According to the rules of the event, the steel frame snowmobile competition is divided into 4 rounds, and the person with the shortest total time of the 4 rounds wins.

The third and fourth rounds will be held on the evening of the 11th.

Alpine skiing men's all-around competition on the 10th produced a gold medal after completing the downhill and slalom events. Austrian Johannes Stroltz, with his excellent performance in the slalom event, overtook Norway's Alexander Hield, the first-ranked downhill player. Get the championship.

Chinese players Zhang Yangming and Xu Mingfu ranked 23rd and 24th respectively in the downhill competition. Their performance in the slalom race improved and finally ranked 16th and 17th, which is also the best record for Chinese players in this event at the Winter Olympics. .

After losing to the world No. 1 Sweden team in the first round, the Chinese men's curling team lost to the Russian Olympic Committee 4:7 on the 10th, and suffered a two-game losing streak in the round-robin competition.

The women's curling competition kicked off on the 10th. The Chinese team lost to the Danish team 6-7 in the first match.