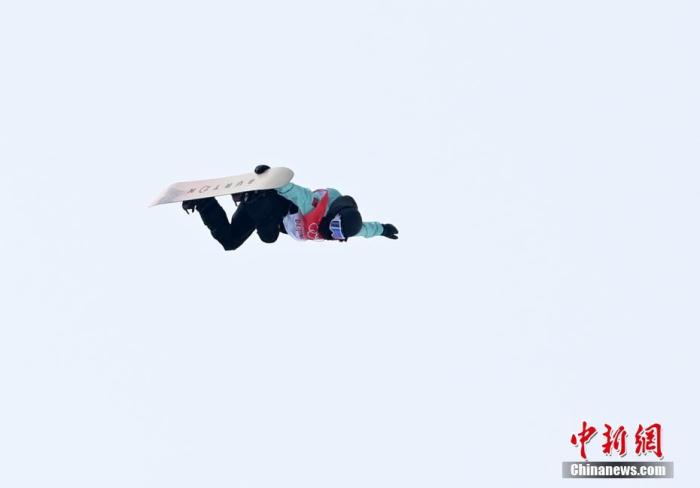 China News Agency, Beijing, February 9 (Reporter Wang Zumin) In the 8 gold competition in the Winter Olympics on the 10th, the Chinese Army is expected to gain some gains in the snowboard and freestyle skiing arenas.

The women's U-shaped field skills final will be held on the snowboard arena.

In the qualifying match on the 9th, Cai Xuetong and Liu Jiayu, two of the "four dynasties veterans" of the Chinese team, ranked third and seventh, and successfully advanced, and another Chinese player Qiu Leng also "pressed the line" as the twelfth "Go to the finals.

The picture shows Cai Xuetong in the competition.

Cai Xuetong, who won the World Cup annual championship for the seventh time this season, and Liu Jiayu, the last silver medalist, are strong contenders for the gold medal in this event.

After the qualifying round, Liu Jiayu made it clear that in the finals, there will be "enlargement moves".

Cai Xuetong said that she admires Chloe King, but it does not prevent her from challenging her and defeating her.

There will also be a men's obstacle chase gold medal in the snowboard competition that day. The Chinese team did not qualify for this competition.

In the freestyle skiing arena, there will be a mixed team final of aerial skills.

The mixed team competition is a new addition to this Winter Olympics, and the Chinese team with strong overall strength is the biggest favorite to win the championship.

This season, the Chinese team has won consecutive championships in the World Cup competitions of the project.

The Chinese team, led by Xu Mengtao, the winner of 26 World Cup gold medals and also the "veteran of the four dynasties" in the Winter Olympics, is expected to renew the front line with the Winter Olympics gold medal in freestyle skiing aerial skills after a lapse of 16 years.

The figure skating arena will hold the men's singles final on the 10th, and 24 players will decide this suspenseful gold medal after the free skating.

The two-time Winter Olympic gold medalist and the most watched Japanese star Yuzuru Hanyu temporarily ranks eighth in the short program with a score of 95.15. It is extremely difficult to complete the counterattack through free skating and achieve the goal of three consecutive championships.

However, it is still worth looking forward to what kind of performance this popular star, who has the reputation of "artist in the arena", will bring in free skating.

The first two rounds of the men's steel frame sled will compete on the 10th. Chinese players Yan Wengang and Yin Zheng will play together.

The steel frame sled is one of the fastest progressing projects of the Chinese team in this Olympic cycle. This team, which was formed after the successful bid for the 2015 Beijing Winter Olympics, has been won by Geng Wenqiang in this season's World Cup. .

Although Geng Wenqiang was not selected for the Olympic list this time, Yan Wengang and Yin Zheng are both very strong. In the official training in recent days, their performances have been in the forefront, and they are expected to compete for medals in this event for the Chinese team.

The women's curling competition kicked off on the 10th. On the first day of the round robin, the Chinese team faced Denmark and Switzerland in a one-day double match.

Founded in 2003, the Chinese women's curling team won a historic world championship in 2009 and a bronze medal at the Vancouver Winter Olympics in 2010.

In recent years, due to the shortage of reserve talents, Chinese women's curling performance has declined.

But in this Olympic cycle, the Chinese women's team has begun to recover. In the group stage of the 2019 World Championships, it defeated the Pyeongchang Winter Olympics champion Sweden, and defeated the world hegemon for the first time in nearly 10 years.

In the second round of the men's curling competition, the Chinese team will face the Russian Olympic Committee team.

The men's ice hockey team rounds are in full swing and China will make its Winter Olympics debut against the world's fourth-ranked U.S. team.

The Chinese men's ice hockey team, currently ranked 32nd in the world, has set foot on the Winter Olympics for the first time, and its overall strength is significantly different from that of the world's top teams.

But in the recent training, the Chinese ice hockey players all said that the Chinese team is ready to meet the challenge.