Liverpool star Mohamed Salah carries the hopes of the Egyptian fans in winning the African Nations Cup for the eighth time in the history of the Pharaohs team, and the first in 12 years. 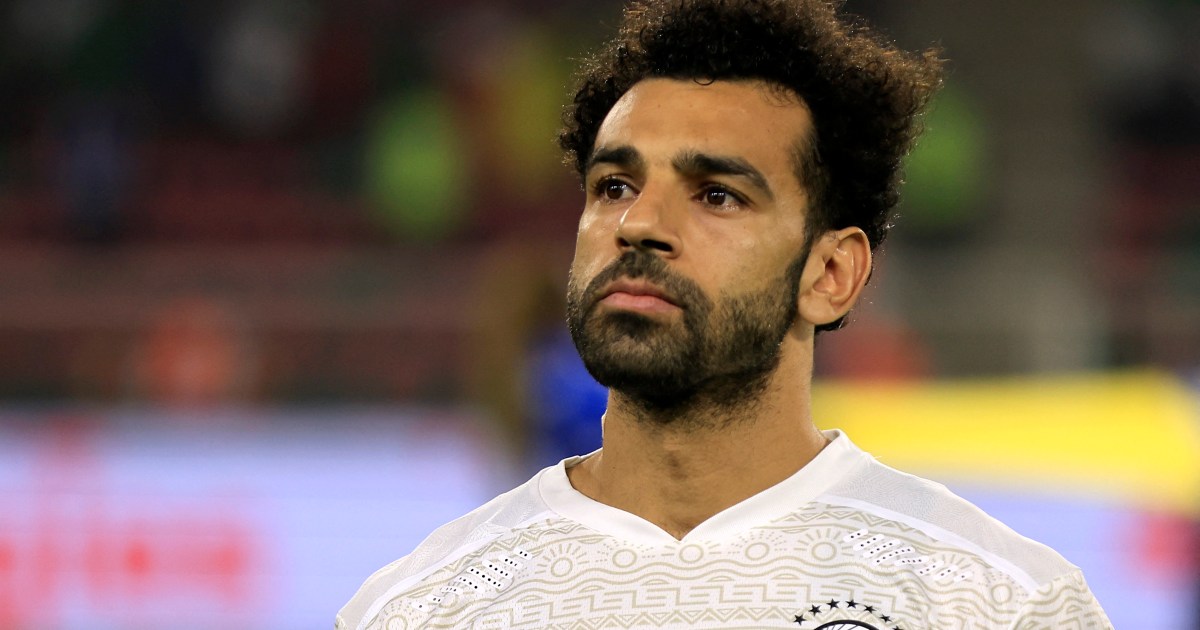 In his third participation with Egypt in the African Nations Cup, Liverpool star Mohamed Salah is looking forward

to achieving the most important title in his career.

Salah bears the hopes of the Egyptian fans to win the continental title for the eighth time in the history of the Pharaohs team and the first in 12 years, when he plays the final match against Senegal - tomorrow, Sunday - in the current edition of the

After he was satisfied with second place during his first appearance with the Egyptian national team in the African Nations in 2017, which was followed by an early and shocking exit from the final price of the last edition of the tournament that took place in Egypt in 2019 in his second participation in the competition, Salah aspires to touch the precious cup tomorrow, to write his name in the records of leaders The Egyptian national team winning the championship.

Salah played a prominent role in qualifying the Egyptian team to the final match of the tournament this year, after he contributed to 3 of the 4 goals scored by the team in its journey in the competition so far, by scoring two goals and making another goal, as well as scoring the decisive penalty against Ivory Coast in the final price of the tournament. .

After leading Egypt to qualify for the World Cup in its last edition, which took place in Russia in 2018, to re-appear in this global wedding after an absence of 28 years, Mohamed Salah is now looking to achieve another achievement by winning the Nations Cup in Cameroon.

But Salah always stresses that

the African Nations Cup is the paramount goal for him in his career with the round witch.

Salah - who won the award for the best player in Africa, presented by the Confederation of African Football (CAF) in 2017 and 2018 - believes that what is missing is a title with his country, to boost his hopes of winning the Golden Ball award presented by the French magazine "France Football" For the best player in the world this year, after he ranked seventh in the list last year, in a shocking surprise to his fans.

The justification for Salah getting this late position, despite his brilliance with Liverpool now, lies in his failure to achieve any achievement with the Egyptian team, unlike Argentine Lionel Messi, who won the prestigious award, after he led his country to win the South American Cup (Copa America) last year.

Salah, who is the top scorer in the English Premier League this season with 16 goals, is also aware that winning the African Nations Cup may revive his chances of winning the best award presented by the International Federation of the Game (FIFA) for the best player in the world this year, After finishing third last year for the second time, behind Poland's Robert Lewandowski and Messi.

Salah is currently ranked second in the list of historical scorers for the Egyptian team, with 45 goals in 80 matches, 22 goals behind former striker Hossam Hassan (the leader), and he is in sixth place in the list of top scorers for the Pharaohs team in the Nations of Africa, which is led by the late star Hassan El-Shazly with 12 A goal, where Salah has so far scored 6 goals in his record of participation in the competition, two goals in the 2017 version and the same in the 2019 and 2021 versions.

Since his first participation in the African Nations 5 years ago, Salah contributed to scoring 9 of the 14 goals scored by the Egyptians in the tournament during that period, meaning that his contribution amounted to more than 64.2%.

Salah, who scored against Guinea-Bissau and Morocco in the current edition of the African Nations, has never visited the Senegal national team, after he played two matches against him in the qualifiers for the 2015 continental championship.

Tomorrow's confrontation will be very special for Salah, who is preparing to meet Senegalese captain Sadio Mane, his colleague in Liverpool, who is one of his most prominent competitors for the African Player of the Year award, which was crowned by the "Teranga Lions" star in 2019.

And the German Jurgen Klopp, the coach of Liverpool, expressed his admiration for how Salah dealt with the Egyptian players in the tournament, and the role he played as a leader, especially in guiding his colleagues and talking a lot with his coach in the Portuguese national team, Carlos Queiroz.

Klopp said in a press statement yesterday, Friday, "Before the penalty kicks against Cameroon in the semi-finals of the tournament, I saw Mohamed Salah speaking to the group, it is really impressive to see that from a player who belongs to your team."

The German coach added, "These experiences are already beneficial to us in the long term, and will serve Liverpool, especially since the pressure was enormous on him, but he managed to ably lead the Egyptian national team, I am really proud of him."

It is certain that Salah will try in various ways to compensate for his loss in the final of the championship in 2017 in Gabon against Cameroon, and cut the way for the Senegal team, which is seeking to win the championship for the first time in its history.