The opening of the Beijing Winter Olympics: the "warmth" of ice and snow with Chinese romance 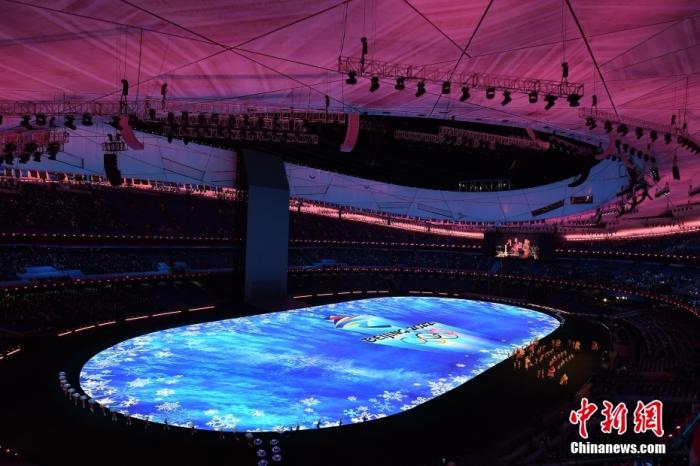 China News Agency, Beijing, February 4th: The opening of the Beijing Winter Olympics: the "warmth" of ice and snow with Chinese romance

"The spring breeze is like a distinguished guest, it is prosperous as soon as it arrives" "Heaven and earth begin to communicate, all things are beautiful" "The dew is white tonight, the moon is the hometown of bright"... On the opening day of the Beijing Winter Olympics, it coincides with the "Li Chun" in the twenty-four solar terms. , accompanied by the corresponding ancient poems, the twenty-four solar terms counted down to the opening of the Winter Olympics in a natural and full of oriental philosophical beauty.

In Chinese culture, the twenty-four solar terms represent the reincarnation of time in a year, as well as the way people get along with nature and the world.

Different from the grand opening of the 2008 Beijing Olympics, the Beijing Winter Olympics 14 years later slowly opened in a calm, breath-taking and warm atmosphere.

Tonight, the reinforced iron "Bird's Nest" began to soak in the warmth of the cold night guests.

On February 4, 2022, the opening ceremony of the Beijing Winter Olympics was held. The picture shows the scene of the "Bird's Nest" in the National Stadium.

This opening ceremony has no stars, no singers and dancers, and no professional actors.

All the actors in the whole performance are students and ordinary citizens from Beijing and Hebei universities, primary and secondary schools, where the Winter Olympics are held.

They have their own studies and jobs, and use their spare time to rehearse and participate in performances.

Cheerful music sounded, men, women and children walked onto the stage and danced to the melody. In a relaxed and festive atmosphere, the enthusiasm and happiness of welcoming guests had dissipated the chill and infected everyone at the scene.

In 2008, the first "handshake" between China and the Olympics drew a picture of the era of "one world, one dream".

An open and self-confident China has made a strong contribution to the Olympic Movement.

Now, the curtain of the Winter Olympics is slowly opening. This time, the stage presented by all ordinary people has a warm and natural hospitality.

"My motherland and I cannot be separated for a moment. No matter where I go, there is a hymn." A child trumpeter played a familiar melody. "My Motherland and Me" is in the hearts of hundreds of millions of Chinese people. Sing warm.

In the center of the stage, in the spotlight, the five-star red flag, which gathers hot emotions, was escorted into the arena by 12 teenagers.

They are all ordinary people struggling in their respective positions, and they are part of the current China.

The picture shows the "Building a Snowflake" session at the opening ceremony.

warmth in the snow

Li Bai, a poet of the Tang Dynasty 1300 years ago, said in his poem, "Yanshan snowflakes are as big as a seat".

On this night 1300 years later, the Chinese people here romantically interpret the famous poems of this "poetry fairy" full of infinite imagination into the warmth of the world.

In accordance with the design concept of "one snowflake" throughout, the guides of each country (region) in the athlete's entry ceremony that night held their own guide cards and adopted the shape of luminous snowflakes.

Its design is inspired by the "Chinese knot" pattern, which symbolizes unity and auspiciousness.

After the entrance ceremony, all the guides held up the snowflake guide cards of each participant, and through dancing and interaction with the light and shadow on the ground, all the snowflakes gathered together to form a "big snowflake".

The snowflakes "as big as a seat" at the foot of "Yanshan" are composed of all the participating partners. The snowflakes are different, but together they form a beautiful winter. Just like all the athletes who come to the Winter Olympics, they have different languages ​​and appearances. And civilization, different from each other but can be beautiful together.

This "big snowflake" that appeared in the "Bird's Nest" that night was endowed with such a "big warm" wish, which is especially precious at the moment.

The main torch and ignition method have always been the most watched part of the opening ceremony.

In the first interview about the opening ceremony disclosed this year, the chief director Zhang Yimou revealed that the ignition is expected to be the biggest bright spot. "It has never appeared in the history of the century-old Olympic Games". The mystery of this huge suspense was revealed that night - its lightness is surprising .

As the last torchbearer put the torch in the center of the "big snowflake", the last surprise of the opening ceremony of the Beijing Winter Olympics was announced, and the last torch was the main torch.

This "slight fire" between the "big snowflakes", which carries a lot of deep meaning, will become the continuous "warm source" of this Beijing Winter Olympics.

In the view of the creator of the opening ceremony, during the Olympic Games, the torch represents the whole world, and the "micro-fire" chosen for the Beijing Winter Olympics is to demonstrate the concept of low-carbon and environmental protection for all mankind, and to represent mankind's commitment to the earth's homeland. warm".

On February 4, the Beijing Winter Olympics kicked off in a warm atmosphere.