The hero of the hockey final, ski superstar and a native of the United States: who could become the standard bearer of the Russian team in Beijing

A week later, Beijing will host the opening ceremony of the XXIV Winter Olympic Games. The Russian national team has not yet announced those who will carry the flag during the parade of nations at the stadium in the Chinese capital. According to various criteria, this honor could be awarded to hockey player Nikita Gusev, skier Alexander Bolshunov, skeletonist Alexander Tretyakov, snowboarder Vic Wild and short tracker Semyon Elistratov. About the main candidates for the standard-bearers - in the material RT. 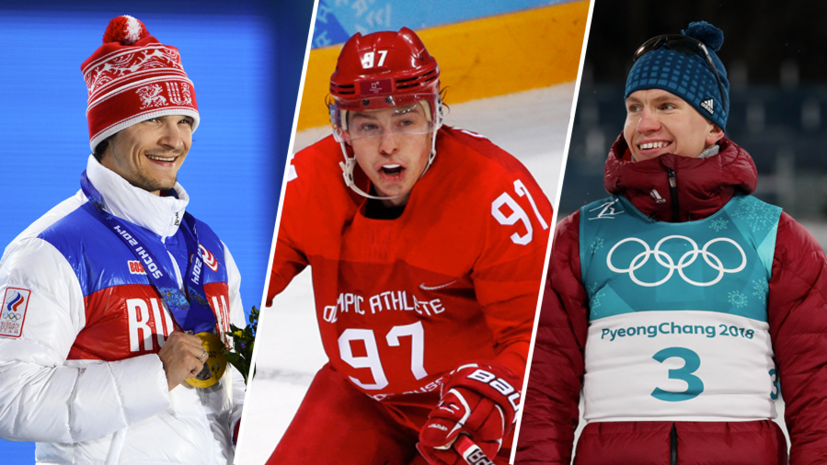 Four years ago, the Russian team was not allowed to enter the flag bearer at the closing ceremony of the Olympic Games in Pyeongchang.

The flag at the parade of nations was carried by a volunteer, while other countries traditionally delegated their athletes who have achieved extraordinary achievements to this role.

Now there are no restrictions, and the national team has the opportunity to pay tribute to those who were deprived of this chance.

Nikita Gusev seems to be the ideal candidate here.

Of those who showed themselves brightest in South Korea, only he remained in the ranks and will again fight for gold medals.

The SKA forward became the top scorer of the hockey tournament by a margin, and scored four points in the final against Germany.

It was he who equalized the score in the last minute of the third period in the minority, and then in overtime otpasoval under the winning throw to Kirill Kaprizov.

Now Gusev is not going through the best period in his club career, but the national team still believes in him.

As at the Tokyo Olympics, two people will be able to carry the flag at the opening ceremony.

If you select a partner Guseva according to the same criterion, then you can stop the choice on the speed skater Natalya Voronina.

Her bronze in the 5000 meters became a real sensation and the best result in Russian history.

By the way, at this distance she is the current world record holder.

The most popular athlete at the moment can also carry the flag of the national team.

Several skaters fit this definition at once, but it is impossible to seriously consider them for the role of standard-bearers because of the tight schedule of the competition.

And the next after them on the list, without any doubt, is Alexander Bolshunov.

Four years ago, he became a real savior of the Russian ski team.

Then it seemed that after the dismissal of Sergei Ustyugov, the young team would perform quite ingloriously, but yesterday's junior showed himself in all his glory.

After each exit to the start, he found himself on the podium and won four medals at once.

Since then, he has only strengthened in the status of one of the main stars, not only in his country, but also in the world.

Of the girls, in addition to the skaters, only Bolshunov's colleague, Natalya Nepryaeva, manages to maintain a balance of popularity and high results.

In four years, she went from the bronze medalist of Pyeongchang in the team sprint to the winner of the Tour de Ski and the leader of the World Cup.

True, participation in the skiathlon, which is scheduled for the next day, can prevent her from getting to the opening ceremony.

The choice of standard-bearer can also carry political overtones.

In this case, the candidacy of Vic Wild would be ideal.

Eight years ago, he became the most popular American in Russia when he won two gold medals at the Sochi Olympics.

A snowboarder married to Alena Zavarzina will fly to Beijing as the most titled athlete in the ROC team.

Today, relations between the two native countries of Wild are going through hard times, but the Olympic Games have always been considered an event that can reconcile entire nations.

The appearance of a native of the town of White Salmon at the Bird's Nest stadium with the flag of the national team could be a symbolic appeal to relieve tensions.

The Russian team also has an athlete with American roots.

This is figure skater Diane Davis, who was born in Las Vegas but competes for her mother's native country, Eteri Tutberidze.

True, she still does not fit the role of a standard-bearer - Davis has not yet achieved great success.

That is why it is much more logical to pair Wilde with his colleague in the sport of Sofia Nadyrshina, the current world champion in snowboarding in parallel slalom.

Another duet, united not only by a sport, but also by a similar fate, can be made by skeletonists Alexander Tretyakov and Elena Nikitina.

Four years ago, they were deprived of the opportunity to climb the podium, which both, with varying degrees of success, managed before in Sochi in 2014.

The International Olympic Committee, while tightly regulating the composition of the Russian team, expelled both athletes for reasons that were never announced.

Prior to this, Tretyakov and Nikitina were being prosecuted for a possible anti-doping rule violation, but both were fully justified.

Skeletonists are still among the best in their field and in Beijing they will again claim medals.

Finally, those who have served their sport for many years and alone personify it can also carry the flag of their team.

He began performing at the Olympic Games in 2010, when ice skating in a hockey box was still considered a hopeless activity for Russians.

But with his direct participation, the short track found a new life in the country.

Yelistratov, although he did not become as titled as the six-time Olympic champion Viktor An, he also achieved significant success, winning the personal bronze medal in Pyeongchang for the last time.

At 31, Elistratov continues to perform in such a way that many younger athletes can only envy.

True, the Games in Beijing will be Ivanova's third in her career, not the fourth.

She, like Tretyakov and Nikitina, missed the competition in South Korea (the reasons were also not given), which only adds to her chances of becoming a standard bearer.