Superiority in serving and insults to the judge: how Medvedev defeated Tsitsipas and reached the final of the Australian Open

Daniil Medvedev defeated Stefanos Tsitsipas in the semi-finals of the Australian Open. Throughout the match, the Russian acted flawlessly on his own pitch, losing only 18 draws out of 100. The meeting at the Rod Laver arena lasted 2 hours and 30 minutes and ended with a score of 7:6 (7:5), 4:6, 6:4 , 6:1. At the same time, the audience witnessed the intemperance of the second racket of the world in relation to the chief arbiter because of the unwillingness to make a remark to the Greek father who violated the rules. 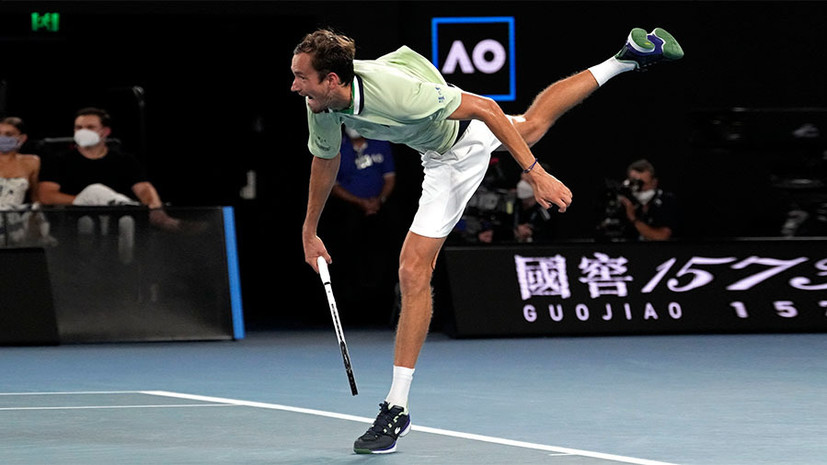 In recent years, the Russian-Greek confrontation has become one of the central ones in the ATP tour. Since 2018, Medvedev and Tsitsipas have shared the court eight times, and recently their paths have increasingly crossed at the decisive stages of major tournaments. Last year, they managed to play each other in the semi-finals of the Australian Open and the quarter-finals of Roland Garros. In both cases, the duel lasted only three games. But if Daniil turned out to be stronger in Melbourne, then Stefanos was stronger in Paris.

This time they met again a step away from the title match of the Australian Major, but there was still a certain difference. Medvedev approached him in the status of the second racket of the world, and also had winning experience in Grand Slam tournaments. But at the same time, he was clearly not in the best condition. The reason for this was both problems with the gluteal muscle, and fatigue after a five-set thriller with Felix Auger-Aliassime, which lasted almost five hours. On that day, Tsitsipas not only entered the court earlier, but also got a ticket to the next round very easily. Yannick Sinner gave up almost without a fight, thus doing Daniil a disservice.

It is curious that even in light of this, the Russian was considered the favorite.

Both bookmakers and famous tennis players were sure of his success.

Preference was given to Medvedev by both the bronze medalist of the Games in Seoul Brad Gilbert and the former first racket of the world Yevgeny Kafelnikov.

He even believed that this meeting would turn out to be relatively simple for him: “Daniel is the favorite in the match with Tsitsipas, and with a margin.

It can get heavy, but I don't really believe in it.

I think the semi-finals will end comfortably in favor of Medvedev.”

In the first set, the assumptions of the two-time winner of TBSH were partially confirmed.

Medvedev really felt confident on the court and took the first five games to zero on his pitch, and in the sixth gave only one draw.

The problem is that it didn’t work out very well at the reception either.

The opportunity appeared only when the score was 4:4, when Daniil immediately earned three break points, and then brought their number to four.

But they failed to take advantage of the opportunity.

As a result, the fate of the party was decided in a tie-break, where at first everything was not going well for the Russian. A mini-break at the reception allowed the Greek to take the lead 4:1, but at that moment Medvedev turned on the maximum speed. As in the confrontation with Auger-Aliassime, the first serve came to the rescue, which, coupled with a confident game on the back line, helped Daniil win six of the next seven draws.

It seemed that failure could break Tsitsipas, but in reality everything turned out differently.

If in the previous set Medvedev gave only two points on his serve, then in the opening of the next set the game itself was twice as much.

It was possible to restore parity only in the middle of the game, and at the cost of enormous efforts.

It took the Russian four attempts to put the squeeze on the Greek and apply for another tie-break.

It is all the more offensive that later he himself deprived himself of this chance.

Two doubles and one unforced error in the ninth game, and Stefanos took the lead again.

It has long been known that Medvedev and Tsitsipas can hardly be called friends off the court.

In 2018, they had a serious quarrel at a tournament in Miami, when the Greek, according to Medvedev, called his counterpart a "damn Russian."

And in 2019, he also described the Russian’s game as boring, which only worsened relations between the athletes.

Daniel himself later admitted that he considered Stefanos his enemy and would not forgive him for such statements.

Melbourne was also not without conflict.

It is difficult to say whether Apostolos Tsitsipas really told his son so clearly or the reason for Medvedev's breakdown was the loss of the game on his serve, but with a score of 4:5, he very sharply and impolitely turned to the judge on the tower.

The Russian wondered why he allowed Stefanos' father to talk to him after each draw, and even insulted the referee.

Such a surge of emotions allowed Medvedev to catch on at the reception and win back two set points, but this was not enough to save the set.

Tsitsipas defended his serve and equalized the score by sets, and at the start of the next one he almost succeeded again at the reception.

He had two break points, but at first he himself made a mistake when hitting from the backhand, and then allowed his opponent to perform another ace.

This mini-comeback instilled confidence in Medvedev and helped him to carry out the third game in the same breath.

On his own pitch, he was great, taking 21 points out of 25 possible, and on someone else's he constantly hinted to his opponent that he was superior to him in class.

Barely noticeable psychological pressure helped at the exact moment when it was needed.

As soon as Stefanos gave Daniil the slightest opportunity in the tenth game, he immediately took advantage of it by converting a break point.

After that, Tsitsipas finally wilted, losing the set in just 24 minutes.

The Russian repeated his last year's achievement at the Australian Open and came close to winning the Grand Slam tournament for the second time in a row.

In the other semi-final, the struggle practically did not work out.

Rafael Nadal confirmed that he is still one of the strongest tennis players on the planet, easily cracking down on Matteo Berrettini.

Unlike the opponent, he made almost no mistakes (19:39) and looked extremely confident on his own serve.

The Italian earned only two break points, one of which he subsequently converted.

And it happened only in the third set.

By this time, Nadal was already leading the games with a score of 2:0, which allowed him to relax a bit.

If in the previous one he missed only twice, then in this one seven times at once.

Suddenly, he began to bring down a branded blow from the forehand, which helped Berrettini to seize the initiative.

Thanks to this success, Nadal not only made it to the finals of the Major for the 29th time and approached Novak Djokovic and Roger Federer in this indicator (both with 31), but also won the 500th victory on hard.

However, he could not hold back his tears for another reason.

Rafa admitted that due to injury, he did not hope to get the opportunity to win a trophy again in Melbourne.

“I had to go through a lot of difficult moments, many days of hard work without any light at the end of the tunnel ... Yes, frequent conversations with the team and family about what will happen if things continue like this.

Thoughts that maybe it's time to say goodbye.

All this was not so long ago.

I don’t know ... Honestly, I don’t have words to describe how important it is for me to be here today, ”Nadal said.

If the men's singles tournament will crown the remake of the US Open-2019 final, then the women's one will be Roland Garros of the same year.

Then Ashleigh Barty and Daniel Collins also fought for the trophy, and the first racket of the world confidently won.

In total, she won and took over in three head-to-head confrontations out of four.

It is noteworthy that this happened a year ago in Adelaide, and the hostess of the courts is probably determined to take revenge.

And on paper, she has a much better chance of winning.

In Melbourne, Barty demonstrates tennis of the highest level and leaves no chance for his rivals.

On the way to the semi-finals, she lost only 17 games, failed to noticeably spoil her statistics and Madison Keys.

The Australian did not notice the resistance from the American (6:1, 6:3) and for the first time reached the final of the home major.

Collins, on the other hand, dealt with Iga Sviontek no less calmly.

In the first set, the polka lost by four games, but did not give up and almost caught up with her opponent.

However, it took too much effort.

It wasn't enough for the second batch.

At the same time, the winners in the junior doubles tournament have already been determined.

In the final, Russian Diana Schneider, together with American Clervie Ngunu, confirmed the status of the first seeded and won the main trophy.

Two sets were enough for them to cope with Canadians Kayla Kross and Victoria Mboko - 6:4, 6:3.

At the same time, the domestic athlete could well have won the golden double, but in singles she stumbled in the quarterfinals.