After the outburst: Daniil Medvedev beat Stefanos Tsitsipas in the Australian Open semi-final

Daniil Medvedev was insane on the referee after the second set of the Australian Open semi-final against Stefanos Tsitsipas. - My God, you are so bad, he shouted, among other things. But after that he got up. He went from clarity to clarity - and won 3-1 in sets. 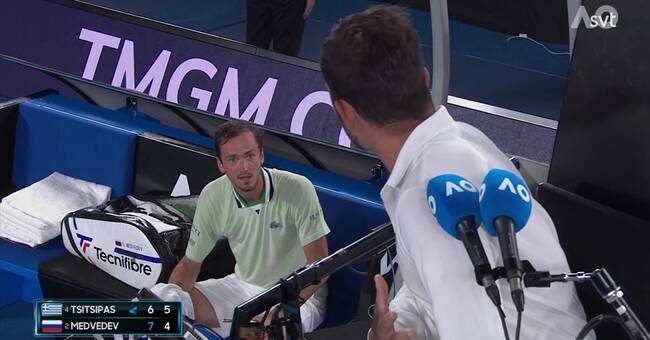 It was after Stefanos Tsitsipas won the second set, and thus equalized the semifinal to 1-1, that perhaps the tournament's biggest referee attack came.

His dad gets to talk at every single point!

How can you be so bad in a Grand Slam semifinal?

I'm talking to you! ”He shouted at the judge.

The reason for Medvedev's anger was that Stefanos Tsitsipa's father gave him instructions during the game, which is not allowed.

- It was a mistake, but I'm glad I got my focus back, Medvedev said immediately after the match.

Because when some people might have thought that Medvedev would lose focus after his outburst, but it was rather the opposite.

In the high-class match, which included many long duels, Medvedev gradually rose.

He won an even third set with 6-4, and then he took over the match overall in the fourth set when Tsitsipas started to make some simple mistakes.

But Medvedev, who is the reigning Grand Slam champion after his victory in the US Open last autumn, did not want to say that the outburst was good for him.

- Honestly, I do not think that bad feelings help me so much.

I often lose matches because of it because I lose focus, he said.

Just like when he played the US Open final this autumn, the opponent is playing to become the best of all time - with 21 Grand Slam titles.

- Once again I will play against one of the biggest.

And once again I will play against someone who can take his 21st Grand Slam title, he states, and continues later:

- I know that "Rafa" is a strong player.

I will do my best.