The national football team faces a new challenge, when it meets at seven o’clock in the evening today, at Al Maktoum Stadium in Al Nasr Club in Dubai, its guest, the Syrian team, in the seventh round for the first group account in the decisive round of the Asian qualifiers for the 2022 World Cup, 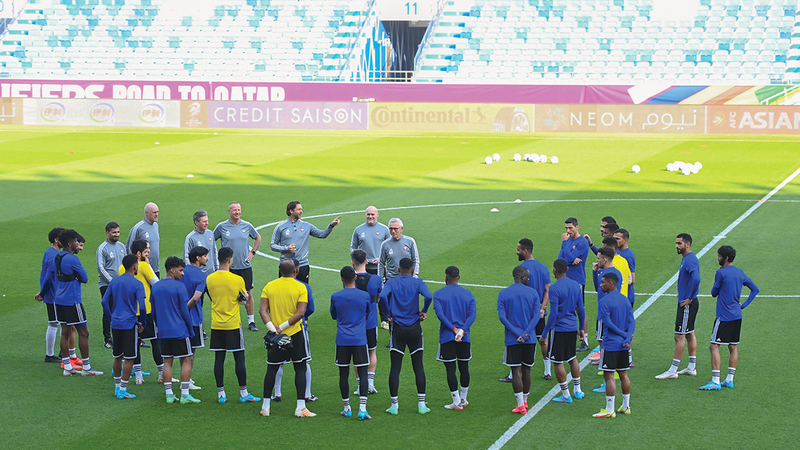 From the national team training in preparation for the Syrian match.

The national football team faces a new challenge, when it meets at seven o’clock this evening, at Al Maktoum Stadium in Al Nasr Club in Dubai, its guest, the Syrian team, in the seventh round for the first group account in the decisive round of the Asian qualifiers for the 2022 World Cup, as this match is considered For the national team, it is decisive and decisive, since any result other than winning will weaken its chances of competing for the qualification ticket through the third place gate, after its opportunity to compete for the direct qualification ticket has diminished through the first and second places, noting that the first-leg match between the team had ended in a draw 1 -1, while the last meeting between the two teams in the Arab Cup in Qatar ended with the national team winning 2-1.The technical staff of the national team, led by Dutch coach Marvik, in addition to the weapon of high morale, fighting on the field, and public support, is counting on the emerging winning cards, such as Majed Rashid, Ali Saleh, Hareb Abdullah and Muhammad Jumaa (Pele), in addition to the experience element represented in Cayo Canedo, Tigali and Abdullah Ramadan, Ali Salmin and Ali Khaseef, while influential elements such as Ali Mabkhout and Fabio de Lima will be missing.

The team seeks to maintain its current third position with six points, after winning only one match at the expense of Lebanon, while the Syrian team occupies the last place with only two points.

Marvik hopes to limit the playing keys and winning cards in the Syrian team, especially the duo Omar Khribin and Omar Al-Soma.

The team's participation in the last Arab Cup was a good preparation for him, despite his exit from the competition in the semi-finals.

Yesterday, the team concluded its daily training, after it fought an internal camp in Dubai, since the 18th of this month, without playing any friendly match, and contented itself with daily exercises.

Historically, the two teams have faced each other in seven official meetings, the Emirati Al-Abyad won three, and the Syrian team won in one match.

Marvik: We may have a hard time attacking

The Dutch national team coach, Bert van Marwijk, confirmed that the team may face difficulty in scoring goals during its match against the Syrian team, due to the absences in the front line, but he stressed that this does not prevent the players present with the motivation and positive mentality that they can use to score. goals, and score points.

The team is missing in today's match a number of players who have offensive capabilities, most notably Ali Mabkhout, Fabio Lima and Khalfan Mubarak.

As for the readiness of the new elements in the national team to play this important match, Marvik described it as somewhat baffling, because young players may be motivated with a greater spirit, but it may reflect this spirit in a negative way, so they must focus, and use the players' energy in a correct way.

He stressed, during the introductory press conference for the match yesterday, the readiness of Al-Abyad and the players' desire to win.

For his part, the Syrian coach, Valerio Tita, described the confrontation as difficult, stressing that his players are motivated to achieve a positive result.