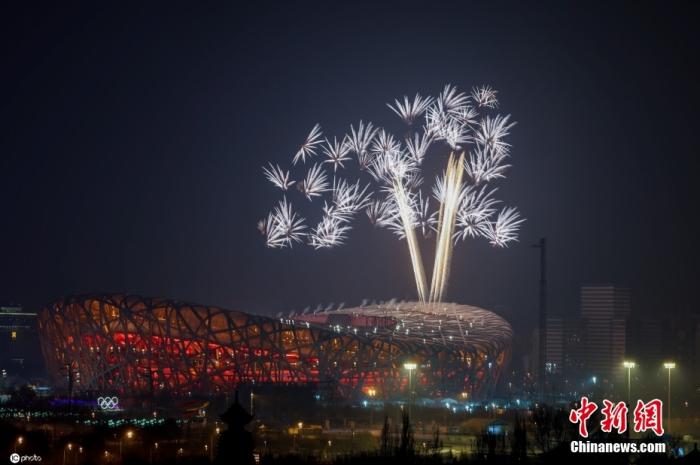 On the Linglong Tower in the central area of ​​Beijing Olympic Park, the big screen for the countdown to the Beijing Winter Olympics has been replaced with a new pattern. In the picture, the mascot "Bing Dun Dun" jumped up from the ice and held up a number "10".

In less than 10 days, an Olympic ice and snow feast will kick off in Beijing.

When China and the Olympics meet again, a different Beijing Winter Olympics will dance in front of the world.

On January 22, the second rehearsal was held at the National Stadium "Bird's Nest" for the opening ceremony of the Beijing Winter Olympics.

In this rehearsal, the whole process and all elements were drilled, and the splendid fireworks lit up the "Bird's Nest" night sky that night.

Unlike the Summer Olympics, in the nearly 100-year history of the Winter Olympics, most of them were held in small ski towns.

For example, it is the "greenest" Olympic Games.

This is the evaluation of Samaranch Jr., chairman of the Beijing Winter Olympics Coordination Committee of the International Olympic Committee.

When the "Water Cube" was transformed into the "Ice Cube" and the Wukesong basketball hall was converted into an ice hockey hall, the almost unprecedented renovation project made the most of the legacy of the 2008 Olympic Games and provided "another possibility for the use of the venue after the game". ".

For another example, it may "change the landscape of winter sports in the world".

When the Winter Olympics came to Beijing, the people embraced the Olympic torch of ice and snow for the first time. Ice and snow sports no longer belong to the cold and distant winter mountains and forests.

When it is truly shared by the public, the vision of "driving 300 million people to participate in ice and snow sports" has gradually become a reality in China.

Foreign media can't help but exclaim that the Beijing Winter Olympics will change the future map of the world's winter sports.

It has witnessed the dynamism of a regional synergy.

When the intelligent and self-driving Winter Olympics train gallops on the Beijing-Zhangjiakou high-speed railway, when the "wind of Zhangbei" becomes a clean energy source and "lights up Beijing's lights", when Beijing and Zhangzhou start a full-season sports and cultural carnival, the once outside the Great Wall The small town is no longer closed, and the Winter Olympic City has become a global winter tourism destination.

The picture shows a visit to the Beijing Winter Olympics Village - Square District, January 16, 2022, in Beijing.

It also created a "model of urban renewal".

On the bank of the clear Qunming Lake in Beijing's Shougang Park, IOC President Bach praised this area.

The Beijing Winter Olympics Organizing Committee settled in, the world's first permanently reserved ski jumping platform was built, and extreme parks, specialty cafes, and boutique hotels have appeared one after another. A new vitality emerges.

On different occasions, we often hear the same voice from the international sports community: the Beijing Winter Olympics' green, shared, open, and clean Olympic concept is highly consistent with the Olympic reform.

If the 2008 Beijing Olympics are still in line with the Olympic standards, the Beijing Winter Olympics is now becoming a new benchmark for hosting the Olympics.

In fact, from a deep-seated perspective, such a transformation stems from an ever-developing China.

In the summer of 14 years ago, because of the arrival of the Olympic Games, Beijing, an ancient oriental city, completed a modern and gorgeous transformation.

From the road under your feet to the air you breathe, the outside world perceives the beating pulse of China's modernization from every detail, rediscovering an open and inclusive eastern country.

After that, the Chinese were more confident and calm in walking in the forefront of the times.

Today's China has already become the world's second largest economy, and it has continued to contribute to global development in various fields, and has continued to achieve mutual achievements through in-depth interaction with the world.

In this context, the Beijing Winter Olympics has become an important opportunity to promote the development of international sports and promote exchanges and mutual learning among civilizations.

The world today is also very different from 14 years ago.

Unseen changes unseen in a century and the turbulent epidemic of the century have never been so closely linked to human society.

The International Olympic Committee added "more unity" to its Olympic motto last year, calling on the world to unite for a better future.

On January 20, the urban landscape layout of the Beijing 2022 Winter Olympics and Winter Paralympics was completed, and many landscapes were lit up, adding luster to the upcoming Winter Olympics.

If 14 years ago, "One World, One Dream" expressed China's call for the future, this time, "Together to the Future" is China's power to convey a kind of action to the world.

On the occasion of the upcoming Beijing Winter Olympics, the United Nations issued stamps for the Winter Olympics for the first time, with the theme of "Sports for Peace".

Sports promote peace, and together to the future.

When China and the Olympics meet again, it will present a different Beijing Winter Olympics.