The 36-year-old Estonian knocked out the world number two

When world number seven Anett Kontaveit was knocked out early, most Estonian fans probably counted off some success in the Australian Open. But 36-year-old Kaia Kanepi barked and knocked out world number two Aryna Sabalenka in the fourth round with 5-7.6-2.7-6 (10-7) just after midnight local time. - I had the margins with me. It was so close, says Kanepi. 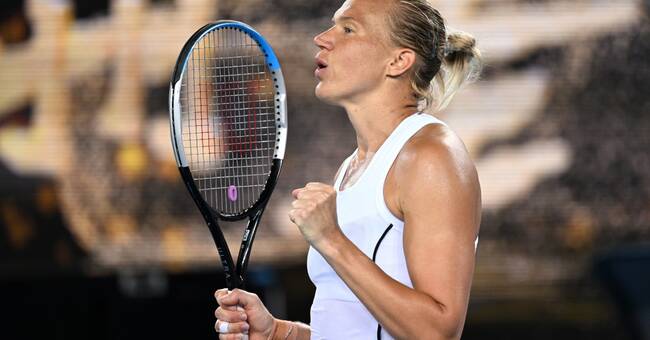 It was the 115th-ranked 36-year-old's biggest success at the Australian Open.

In the other Grand Slam tournaments, she has reached the quarterfinals twice in each - most recently in 2017.

Kanepi burned four match balls before she could win at Margaret Court Arena where the match was moved due to several late matches.

- I thought I would lose the match after losing so many match balls in my own serve.

It was difficult to relate to it when my hands shook, says Kanepi according to AP.

At 5-4 in the game in the third set, Kanepi had, among other things, 40-0 and served, but Sabalenkia was able to break and eventually fix a super tiebreak that went to ten.

"Did not take advantage of the opportunities"

In the quarterfinals, Kanepi will face world number nine Iga Swiatek, who beat Rebecca Peterson in the second round.

After a long duel with balls at difficult angles, Sabalenka pulled a backhand into the net and Kanepi was able to win the match.

- I had all the opportunities but did not take them and became too emotional and could not find my way back, says Sabalenka.