Corner sheet on the injury report: "More survival than thinking about skiing"

Lisa Hörnblad had just returned from a long-term cruciate ligament injury when she rode a new one in yesterday's super-G in Italy. She's taken after the new bang. - I have gone into some kind of survival mood, says Hörnblad to SVT Sport. 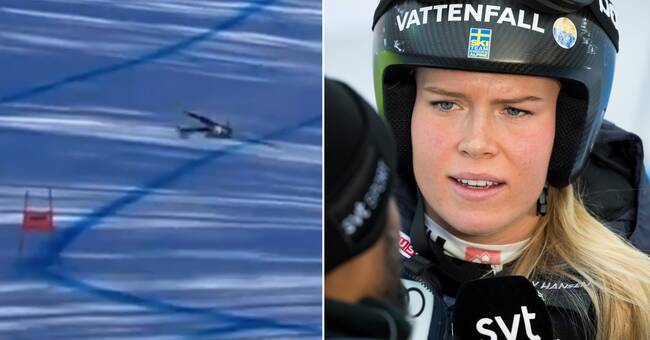 It was a difficult, fast-paced, course in Cortina d'Ampezzo's super-G where 22 skiers failed to reach the finish line.

The Italian speed specialist Sofia Goggia crashed in the same place as Hörnblad and also sustained a knee injury.

- It happened 24 hours ago and I have gone into some kind of survival mood.

I'm just trying to get home.

I do not want to allow myself to feel anything because then I think I did not have the strength.

It is emptiness, says Hörnblad.

The 25-year-old was examined at a hospital in Milan yesterday after being taken down the hill in a sled.

Last time she was gone for 2.5 years.

- I have been on examination in Stockholm and prepared the plan for the operation next week and then the journey begins, says Hörnblad.

So the plan is to take you back?

How are the feelings now when it is the second severe knee injury?

"Can not bear to think about rehab"

- It is the other knee and I feel that it is more survival than thinking when I can ski again.

I can not bear to think about rehab right now, says Hörnblad.

The injury is worse this time than when Hörnblad disappeared for 2.5 years.

Goggia, whose crash looked worse, damaged ligaments, cruciate ligaments, tendons and suffered a minor fracture of the fibula bone that runs parallel to the tibia.

Despite the injury situation, she started rehab today to, among other things, try to defend the downhill gold from Pyeongchang 2018.

"It's the plan God has for me and I can not help but open my arms to welcome it and accept it," Goggia wrote on Instagram.