“These bans will complicate their lives”: Ukrainian athletes were not recommended to stand next to the Russians at the Games in Beijing

The leadership of the Ministry of Sports of Ukraine recommended that its athletes and coaches at the Beijing Olympics not stand next to the Russians when they hold the ROC flag in their hands. According to media reports, Ukrainian athletes were also instructed not to take pictures with rivals from the Russian Federation and not to give interviews in Russian. In an interview with RT, two-time Olympic champion Sofya Velikaya said that if she were her colleagues, she would not follow these instructions. Tamara Pokrovskaya, head coach of the national synchronized swimming team, noted that it was impossible to imagine such a thing before. State Duma deputy Nikolai Valuev urged not to be surprised at the “idiotic” decisions of the Ukrainian authorities, and the head of the Russian Wrestling Federation, Mikhail Mamiashvili, accused them of inciting hatred. 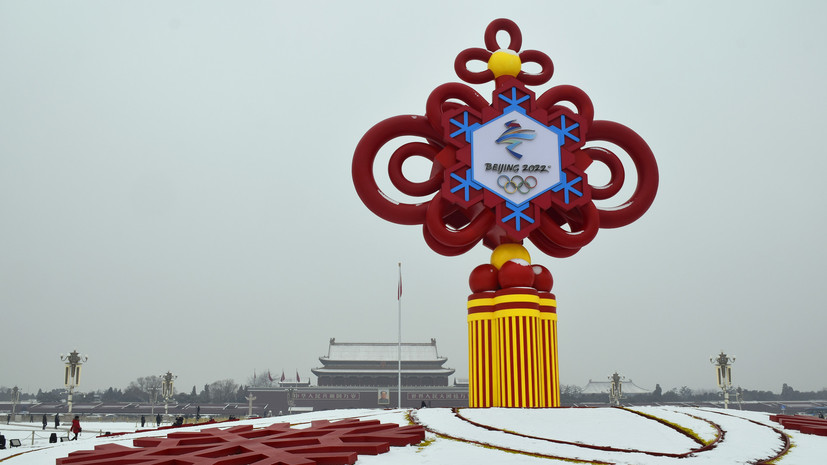 “How can you forbid saluting another athlete?”

Less than two weeks before the start of the Olympic Games in Beijing, the Ukrainian team was embroiled in a serious scandal.

The reason is in the statement of the Minister of Youth and Sports of the country Vadim Gutsait.

On Monday, January 24, he said that in China, Ukrainian athletes are not recommended to stand next to the Russians when they hold the ROC flag in their hands.

According to the politician, he had an online meeting with the team, during which they were explained how to behave in cases of possible “provocations”.

“All athletes are aware, they know how to behave in such situations ... We have been working on it.

After the summer Olympics, this was not the first time we met with athletes and discussed this, ”Gutzeit is quoted as saying by Public / Sports.

However, according to Russian media, this is far from the only ban that Ukrainians will have to obey during the Games.

Allegedly, they were also advised not to take pictures with the Russians and not to give interviews in Russian.

At the same time, it is not entirely clear what to do for people who do not speak Ukrainian well, or do not know it at all.

The leadership of Russian sports did not comment on the behavior of the neighbors, but the honorary president of the ROC Vitaly Smirnov called what was happening an unprecedented event.

According to him, the country's authorities are actually using blackmail to force athletes to fulfill a political order.

“How can you forbid saluting another athlete?

The very spirit of Olympism is being violated.

This is an ostentatious action, the gentlemen from the ministry are trying to curry favor with higher leaders, to show how cool they are.

It cannot be described otherwise... However, this is done by a state body.

The jurisdiction of the IOC does not apply to him, but, of course, the appropriate attitude of the public can be expressed about this, ”the TASS official quotes.

Journalist Dmitry Guberniev spoke most harshly on this score, who called the presence of Gutzeit in his post the main provocation for Ukraine.

According to him, the members of the biathlon teams of both countries always communicated well with each other.

“We now lived in the same hotel and had a great conversation in Russian.

Everyone communicates normally, in particular in the biathlon family, ”the Match TV commentator quotes.

The reason for such a tough decision by the Ukrainian authorities lies in the scandal that erupted over a joint photo of athletes Yaroslav Maguchy and Maria Lasitskene after the end of the high jump competition at the Olympic Games in Tokyo.

Together they climbed the podium: the Russian woman got gold, and her competitor got silver.

As a result, the Ukrainian woman was harassed in her homeland, she was even summoned for a conversation at the Ministry of Defense.

Maguchy had to make excuses and explain that she just paid tribute to her opponent, according to Olympic traditions.

Therefore, the refusal of the Ukrainian athlete Igor Tsvetov to be photographed with the Russians Dmitry Safronov and Artyom Kalashyan on the pedestal during the Paralympics was not at all surprising.

The sprinter defiantly walked away from his colleagues.

The IPC and RPC explained the athlete’s behavior with the intention to comply with strict coronavirus restrictions, but he himself wrote on Facebook about the desire to “show respect for his country.”

One way or another, in Russia, the imposition of all kinds of bans and restrictions on Ukrainian athletes was condemned.

So, according to the Olympic champion and president of the country's Wrestling Federation (FSBR) Mikhail Mamiashvili, the behavior of the authorities in this case raises big questions about their mental state.

“It only requires the decision of the attending physician.

There are no more comments.

Prior to this, local figures were limited to bans on attending major tournaments in Russia.

It kind of stuck in my head.

The guys got their money's worth.

But the current ban from the ministry covers everything, ”the functionary said in an interview with RT.

The Seoul Olympic champion believes that such restrictions violate the norms of sports and hit hard on the athletes themselves, whose rights are grossly violated.

“A shadow is cast on any human relationship.

In my understanding, this is an attempt to make sure that there is nothing in common between us ... People are trying their best to impose negativity.

Unfortunately, the scoundrels could not leave alone the sport, which exclusively unites.

My colleagues from Ukraine and I played together for the USSR national team, climbed the podium together and supported each other.

Yes, and we still communicate and are friends, ”added Mamiashvili.

In turn, State Duma deputy and ex-world boxing champion Nikolai Valuev admitted that he had not been surprised by any “idiotic” decisions of the Ukrainian authorities for a long time.

“But first of all, the Ukrainian citizens themselves need to worry about the athletes.

Let them turn to the people they have chosen and ask them to stop tugging at the athletes so that they can have the opportunity to perform at the Olympics in peace.

Does the ministry have the right to issue such bans?

I think the actions of local authorities compensate for their "professionalism," Valuev said.

Surprised by the introduction of bans and two-time Olympic champion in fencing Sofya Velikaya.

According to her, they will strike first of all at the Ukrainian athletes themselves, with whom the Russians have always been close.

“We need to do everything to keep sport out of politics.

We have always had very warm and professional relations with fencers from Ukraine.

There was mutual respect.

We tried to help and support each other when needed.

At the Tokyo Olympics, they didn't say anything about any restrictions.

Then the whole world was rallied by the coronavirus.

I have never personally encountered anything like this, ”Velikaya said.

“I can say frankly, if I were in the place of Ukrainian women, and they would try to dictate to me who I can stand next to and who I can’t, I probably would not support such an initiative.

But this is their life, their destiny, their leaders and their country.

They are free to decide what to do, ”the fencer emphasized.

Finally, Tatyana Pokrovskaya, head coach of the Russian synchronized swimming team, admitted that it was unrealistic to imagine such restrictions before, and added that athletes from the two countries have always been united by warm friendly relations.

“Synchronized swimmers from the national teams of Russia and Ukraine have been communicating for a long time, including on social networks.

And so, believe me, in all forms.

We have always believed that this is a country close to us, and suddenly this.

At the Olympics in Tokyo, the Ukrainians also did not feel any cooling.

Again, this is all very sad.

And most importantly: a blow was dealt to the athletes themselves from Ukraine.

Such prohibitions will complicate their lives and clog their heads with unnecessary thoughts.

They used to write: "Sport is the world."