The phrase: "We have not closed the door - you can connect later"

Four players in Damkronorna have tested positive for covid-19 and been replaced in the Olympic squad. Now the Swedish Ice Hockey Association is opening so that they can still be relevant for games. - We do not close the door completely but they will continue to be tested and you can join during the ongoing tournament, says Olof Östblom, competition manager at the association, to SVT Sport. 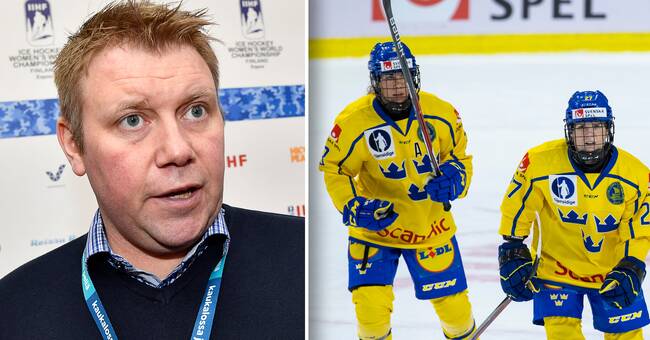 On Saturday, Damkronorna announced that two of the team's key players, first goalkeeper Sara Grahn and scoring machine Hanna Olsson, have tested positive for covid-19 and will be replaced in the Swedish Olympic squad.

A total of four players have currently resigned for the same reason.

But Damkronorna will play their first group game match on 3 February.

And a possible quarter-final will not be played until the eleventh or twelfth of February.

When SVT Sport talks to Olof Östblom, competition manager at the Swedish Ice Hockey Association, he opens up for Grahn and company to be able to join the squad anyway.

Will continue to be tested

According to BOCOG's regulations, ie the Olympic organization in China, you must present four negative tests in five days if you have had a covid infection within 30 days before the start of the Olympics.

- The uncertainty for us is that we do not know if the players, who are in the middle of an infection, leave the first negative test after three, seven or even more days.

The tournament starts on February 3 and then we must be able to guarantee a team on the track.

We have to think about what is best for the team, says Östblom, about why they have chosen to replace the players now directly instead of waiting.

Is it definite that these four players will miss the Olympics?

There is no chance that they will connect later?

We will continue to test all four, the only thing we are preparing for right now is that they will not be among the 23 players who board the plane to China on January 27.

But they will continue to be tested so if we suffer from further illness in the team or something else happens they can join.

"We have not closed the door"

Since all four - Sara Grahn, Hanna Olsson, Linnea Hedin and Emmy Alasalmi - have already been replaced in the squad, new breaks are required to open vacancies in the squad.

So if one of the three goalkeepers who goes to China resigns, and Sara Grahn gets well, then can she join anyway?

- Then she could connect, yes.

You leave the door open for these four to join?

- Yes, because we continue to test them, we have not completely closed the door.

Should we stop testing them, they would only need to manage their virus based on the Swedish regulations.

That would be closing the door.

What is waiting in place in China when connecting?

- Those who land in China are tested directly at the airport.

Then you are taken to the Olympic village where you are in your room until you get the test answer.

Is it possible to join the Olympics during the current tournament?

No one else with symptoms right now

Swedish national team captain Ulf Lundberg says that he suffers immensely with the players who have been affected by the virus and currently look to miss the Olympics.

There are good players who come in as well, you have to remember that, but I understand that these girls are very disappointed.

Is there any other player in the squad who has symptoms right now?

But I check with our team doctor all the time.

We are in a publishing house in Ängelholm right now and this is about quarantine.

These are very strict restrictions.

Should the last SDHL matches have been postponed before the Olympics to avoid the spread of infection?

- In answer to that question, I would like to emphasize our dialogue with SDHL, which has been great.

It is active and has been going on in a healthy way throughout my time as national team captain.

What is Damkronorna's goal in the Olympics?

- The goal we have set before remains.

We have the chance to win a quarter-final place and that has not changed, says Ulf Lundberg.