"I am sure that the 2024 Olympics will be even better"

Two gold and one silver. But the next Olympics will be an even greater success for the Swedish athletes. - Everything indicates that, says Vésteinn Hafsteinsson to SVT Sport. 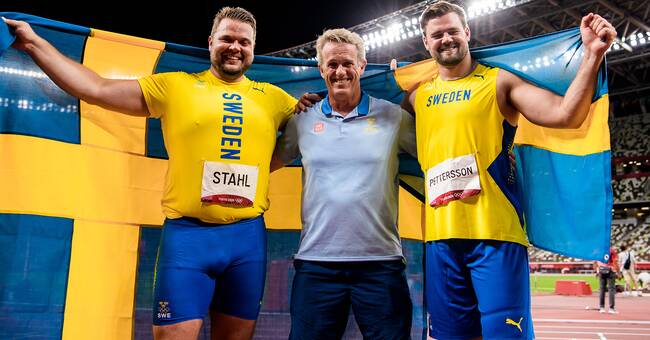 This summer's Olympics in Tokyo ended with nine Swedish medals - three of them were taken by athletes.

The pole vaulter Armand Duplantis took gold and for the discus throwers Daniel Ståhl and Simon Pettersson it was gold and silver respectively.

In addition, there were four top ten places at this summer's championship.

- There is a headwind in Swedish athletics.

This was the best Olympics in athletics since 2004 and there are fantastic talents in Swedish athletics and there is a lot going on, says Vésteinn Hafsteinsson to SVT Sport.

Hafsteinsson trains both the medalists Ståhl and Pettersson and the shot putter Fanny Roos who finished seventh in the Olympics.

At the Sports Gala on January 17, he received the award "Leader of the Year".

At the same gala, the athlete Maja Åskag received the award "Newcomer of the Year" after taking gold in both long jump and triple jump at the junior EC and junior WC.

Since the Tokyo Olympics have been postponed for a year due to the pandemic, it is time again in less than three years.

And then the Swedish athletes take even more medals than in Tokyo, Hafsteinsson believes.

- I am sure that the 2024 Olympics will be even better than the latest, everything indicates that and it is very exciting, he says.

Positive to the motion on the top eight requirement

The demand has been questioned and at the beginning of January, eight special sports federations, led by athletics, submitted a motion to SOK's AGM in April, where they demand a thorough investigation of the Olympic competition.

Hafsteinsson is positive about the actions of the special sports federations.

- This is an issue that has been discussed a lot.

Athletics is a global sport and it is difficult to be in the top eight.

Last Olympics, only Fanny Roos among the women was in the top eight and of the boys, it was the three medalists and Thobias Montler, it's that hard.

If we had the top twelve, it would lead to more opportunities, we should not remove those who can surprise.

- The more we send to fight for the medals, the greater the chance we have to take medals.

CLIP: Hafsteinsson on the motion to SOK

Hafsteinsson on the motion to SOK: "Should not remove those who can surprise"