The ninth loss to Nadal and a four-hour thriller with Mannarino: how Karatsev and Khachanov flew out of the Australian Open

Russian tennis players failed to score a single victory in singles on the fifth day of the Australian Open. Karen Khachanov won the third set in the match with Rafael Nadal, but failed to build on the success and suffered a ninth consecutive defeat against the Spaniard. Aslan Karatsev spent 4 hours and 39 minutes on the court and played 19 break points, but could not break the resistance of Adrian Mannarino. And Veronika Kudermetova lost to Maria Sakkari, finishing her performance in the third round for the second year in a row. 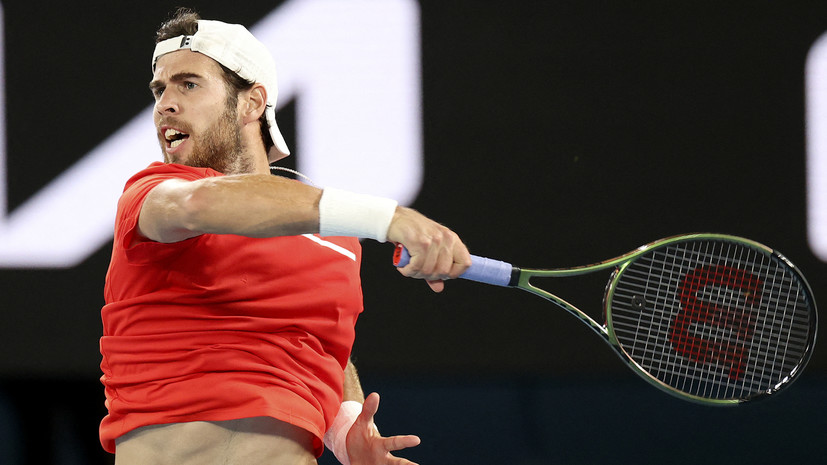 As part of the fifth day of the Australian Open Tennis, one of the most anticipated was the match between Karen Khachanov and Rafael Nadal. On the one hand, the Spaniard was considered a clear favorite, and this is not surprising - in the previous eight meetings, he did not suffer a single defeat and lost only one set - at the US Open-2018. On the other hand, they last shared the court in 2019, and the 20-time Grand Slam winner missed most of last season due to a knee injury. It remained to be hoped that the Russian spent this time usefully and managed to make progress.

At first, there was a feeling that Khachanov could not avoid another defeat. In the first set, he immediately gave his own pitch, and was completely helpless on someone else's. Karen won just one of 21 draws at the reception and found himself in the role of a catch-up. In the second installment, everything was repeated with the only difference that Nadal made not one, but two breaks at once. Neither a high percentage of the first serve (more than 70%), nor ten aces helped.

But in the third Rafael unexpectedly slowed down.

The 35-year-old tennis player stopped consistently hitting the first ball and hitting unimaginable strikes under the back line.

And the speed of movement has decreased.

And Khachanov took advantage of this.

From the very first attempt, he took the game at the reception, and then did not allow parity to be restored, having played three break points.

To celebrate, he almost repeated the success, but that was enough.

For the second time in his career, the Russian won a game in a match with Nadal.

But in the fourth set, Nadal dotted the “i” and showed that Khachanov is not yet ready to compete with the ex-first racket of the world.

Another thriller by Karatsev

Much more intense was the battle involving another Russian tennis player, which lasted until almost three in the morning local time.

This time, Aslan Karatsev approached the start of the match with Adrian Mannarino much more responsibly, but this did not save him.

He lost a set in a tie-break and found himself in the role of a catch-up for the third time in a row in the tournament.

Restoring the status quo was not easy.

In the first game, Mannarino acted almost flawlessly (only one unforced error) and did not slow down much in the second.

Despite this, Karatsev not only made a break, but also had two set points, although none of them managed to convert.

Everything ended again in a tie-break, but this time the Russian was more successful.

By the time Karatsev and Mannarino reached the third set, it was past midnight in Melbourne.

However, the rivals did not think to rush.

For 80 minutes they determined the winner in this segment.

At a key moment, Aslan lost the pitch for the third time in a game and for the first time did not make a reverse break.

In the 12th game, with the score at 30:40, he made a mistake after hitting from the backhand, after which he could not take two more points.

After that, being on the court turned into torment for Karatsev.

He was clearly troubled by his right hip, which forced him to take a medical break.

True, this happened after another break by Mannarino.

Despite the pain and fatigue, Aslan desperately tried to restore parity and had “more” at the reception three times, but failed to take advantage of the chances.

By the way, for the entire meeting, he himself played 19 out of 24 breaks.

In 2021, he sensationally reached the semi-finals, where he was stopped by the future Australian Open triumph Novak Djokovic.

In singles, Veronika Kudermetova was also defeated. She approached the confrontation with the fifth racket of the world, Maria Sakkari, in the status of an underdog and was unable to create a sensation. A colossal number of unforced errors (32) and an almost complete failure at the reception led to the fact that the Russian woman capitulated in the third round for the second year in a row. If in the first set she fought on equal terms with the Greek, then in the second she fell down and won only two of the 14 rallies on her opponent's serve. The Russian was content with just one game and lost devastatingly - 4:6, 1:6.

A few hours later, Kudermetova was able to lighten her mood a few hours later, when she, paired with Elise Mertens, broke the resistance of the titled Kristina Mladenovic and Caroline Garcia. In 2016, the French women won the Roland Garros, but soon they stopped performing together on a regular basis. The first one worked out. She teamed up with Timea Babos and won four more Grand Slams, two of them in Australia. Without the help of the Hungarian, it was not possible to succeed. The Russian-Belgian duo took over in three sets (4:6, 6:3, 2:6) and went to the Chinese Xu Yifan and Yang Zhaoxuan.

In the other part of the grid, Anastasia Potapova and Rebecca Peterson continue to fight for the trophy.

They were not upset after losing the first game and dealt with the mistresses of the court Kimberly Birrell and Charlotte Kampenaers-Poch.

Now they have to fight with the Polish Magda Lynette and the American Bernard Pera.

The fifth day of the championship was remembered for several sensations at once. The author of one of these was Miomir Kecmanovic, whose success in Melbourne was largely due to the incident with Novak Djokovic. The expulsion of a compatriot from the country not only provided the Serb with a meeting with a much less powerful tennis player in the first round, but also motivated him. He promised to avenge his comrade and had already crushed three opponents at once. He dealt with Salvatore Caruso and Tommy Paul in turn, and then interrupted a three-match losing streak in the confrontation with Lorenzo Sonego. The 25th seed managed to pull out only the second set in the tie-break, but gave up the remaining three, allowing Kecmanovic to break into the fourth round of the Major for the first time in his career.

The current winner of the Australian Open completed the performance. Naomi Osaka won the first set, had two match points in the third, but still lost to Amanda Anisimova. Everything was decided in a tie-break, where the American literally crushed her counterpart - 4:6, 6:3, 7:6 (10:5). The Japanese woman could not go beyond the third round on the third TBSH in a row and will soon fall out of the top 80 of the WTA rankings. The last time it was this low was in August 2016.

Sheathed racket and Elina Svitolina, once again unable to oppose anything to Victoria Azarenka. The 17th racket of the world took only two games and suffered a fifth defeat in a row from a rival from Belarus. Everything turned out unsuccessfully for two more athletes from the post-Soviet space. Marta Kostyuk was beaten by Paula Badosa, and Elena Ostapenko was beaten by Barbora Kreychikova. The Czech not only advanced to the next round, but also made headlines by being the first ever booked for breaking toilet break rules at the Australian Open. She spent eight minutes in the subtribune instead of the prescribed three, and the need to fix a broken chain allegedly forced her to linger.

The applause of local fans again deserved Nick Kyrgios. The day before, he gave a fight to Daniil Medvedev, and a day later, in a pair of Tanasi Kokkinakis, he knocked out the main favorites in the men's doubles championship. It took them only two sets to send home the ATP ranking leaders and the first seeded Australian Open Serbs Mate Pavić and Nikola Mektic.

It was not easy for other favorites of the competition. The duel between Matteo Berrettini and Carlos Alcaraz dragged on for five sets and lasted more than four hours. Although everything could have ended much earlier and very deplorably. In one of the draws, the Italian slipped and twisted his leg, almost getting seriously injured. The fall was so terrible that even an opponent went to check his condition. However, the seventh racket of the world escaped damage, and on a tie-break pulled out a ticket to the fourth round - 6:2, 7:6 (7:3), 4:6, 2:6, 7:6 (10:5).

So far, he has already spent a total of 8 hours and 5 minutes on the courts of Melbourne, and has not been able to quickly resolve all issues with Ryan Opelka.

The Canadian won the first two sets, gave up the third, but then still put the squeeze on the American.

At the end of the meeting, he admitted that he had already “greatly got acquainted with ice baths”, but urged not to worry about his well-being.