The Secretary-General of the Dubai Sports Council, Saeed Hareb, revealed the details of the sixth stage of the Emirates Tour, which will be hosted by Dubai on February 25, and will be called the “Expo 2020 Dubai” stage. Dubai within the Emirates International Tour of the world 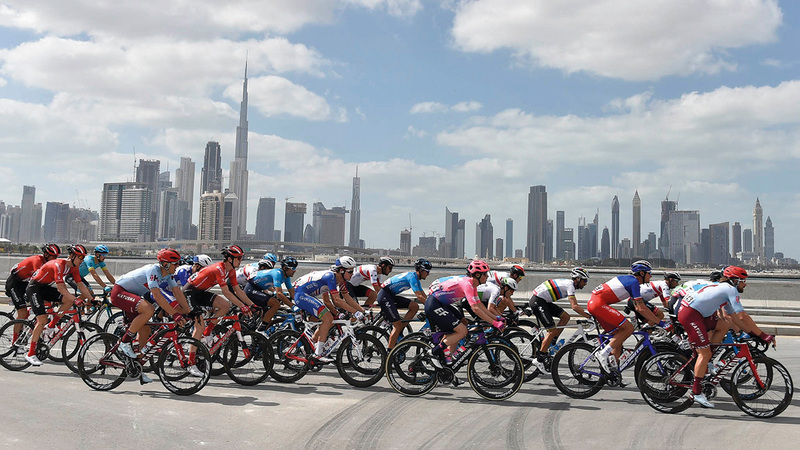 Harib: The Dubai stage tracks have been laid

The Secretary-General of the Dubai Sports Council, Saeed Hareb, revealed the details of the sixth stage of the Emirates Tour, which will be hosted by Dubai on February 25, and will be called the "Expo 2020 Dubai" stage.

In a statement, Hareb said in a statement yesterday: "The Dubai stage tracks have been completed within the Emirates International Cycling Tour, whose ranking will be the sixth stage, starting with the participation of 140 cyclists from 20 international teams, and a distance of 186 km."

The Secretary-General of the Dubai Sports Council added: "The launch will be from inside (Expo Dubai), then the circumambulation procession will go to different areas of Dubai, passing through a number of the most prominent landmarks and world-renowned architectural icons that characterize Dana Al Dunya, foremost of which are Dubai Harbor, Ain Dubai, the Museum of the Future, as well as other distinct areas in Dubai Sports City, Silicon Oasis, and Meydan, and return to the heart of the city via Jumeirah Street and Palm Island, and then return again to the headquarters (Expo Dubai).

He explained: “When designing the cyclists’ path, we took into account that the most prominent beautiful areas in (Expo Dubai) at the beginning and conclusion, as well as other areas of great beauty, enjoying international fame, so that hundreds of millions of audience and viewers on television in different continents of the world could enjoy the most beautiful aerial shots. And the ground is one of those areas.”

He continued, "Despite the value and prestige of the Dubai Tour in the Emirates International Cycling Tour, it will not be the last in our series of international championships at the Expo headquarters, as the Dubai Sports Council is working with organizers from inside and outside the country to organize more sports events and tournaments, which will be announced. Later, and presenting it as a gift to our audience in this exceptional and historic event, not only in the country, but in the region and the world.”

He continued: "The Dubai Sports Council is in the process of organizing new international sporting events at the headquarters of (Expo Dubai 2020), during the coming period, in the presence of large numbers of world champions from various sports, to compete in front of the audience of (Expo Dubai), the largest event in the world ever." .

The Secretary-General of the Dubai Sports Council said: "At (Expo 2020 Dubai), world champions and decision makers from various sports gather to compete, and discuss the reality and future of sports in the world, along with elite specialists in all areas of life, to present their advanced vision for the future of the world, advanced industries and tourism. developed, and a review of their cultural heritage and their multiple resources in all fields.

He added: "Expo 2020 Dubai is the most interconnected, and the vision of the wise leadership for sport and its support for it was reflected on its position in society, and it was also reflected in the place of sport among the many different activities in (Expo Dubai)."

He continued: "The world's largest economic, tourist, industrial, cultural and civilized event has turned into a sporting event as well, and the World Stars Forum, and the public is accustomed to watching international sports events in the heart of (Expo Dubai), as well as participating in community sports events that are held on a weekly basis, whether on the The level of individual or competitive events that are held in the gathering system.

He concluded: "Chess enthusiasts in various countries of the world continued to compete for the title of the World Championship, which lasted 11 rounds, and ended with Magnus Carlson winning the title, in the presence of the President of the International Chess Federation, Arkady Dvorkovich, at a time when thousands of participants from inside and outside the country of different ages and nationalities will gather. to compete in the second edition of the Expo Run.

• 186 km distance from the Dubai stage of the Emirates International Cycling Tour.

• 20 international teams are competing for the title of the Emirates International Cycling Tour.