Jump above the head: the Russian men's team started with three victories at the European Handball Championship

The Russian men's handball team took first place in their group at the preliminary stage of the European Championship. Wards of Velimir Petkovic won three victories in three matches, including a sensational victory over the bronze medalists of the previous tournament by the Norwegians. Team leaders Sergei Mark Kosorotov and Dmitry Zhitnikov scored 17 and 14 goals respectively in these meetings. 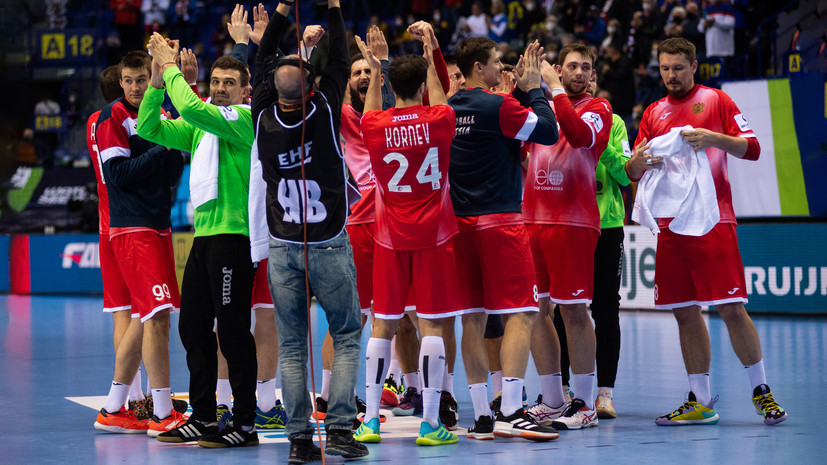 An ambiguous victory at the start

The opening match of the preliminary round with Lithuania turned out to be ambiguous for the Russian team.

On the one hand, Velimir Petkovic's wards won a predictable victory - 29:27.

On the other hand, we spent two completely different halves.

In the first, domestic handball players did not leave a stone unturned from the opponent.

I was especially impressed by the debut breakthrough with a score of 7:1.

Moreover, he not only confidently completed attacks on his own, but also coolly interacted with his Vistula partner Dmitry Zhitnikov.

The favorite also looked reliable in defense, allowing nothing to his opponents.

Alas, things changed dramatically in the second half.

Now the Lithuanians had the initiative and acted aggressively and boldly.

They managed to revive the intrigue when it seemed there was no chance.

The Russians absolutely messed up the game in defense, where they made a large number of mistakes.

Finally, unlike the right one, the left edge did not work at all.

In the end, the opponent managed to reduce the gap to a minimum, but the Russian team still retained the advantage and won a major victory.

True, the quality of the team's play left serious questions, and before the key game with powerful Norway, it became alarming for him.

Loud sensation in the confrontation with the favorite

In the second round, Petkovic's wards showed their main quality - complete unpredictability.

They are able to fail one confrontation, and hold the other at the highest level.

Fortunately, it turned out to jump above your head in a match with the main favorite of the group.

The Scandinavians reached the semi-finals at the last championship of the continent and won bronze medals.

In Hungary and Slovakia, they intended to exchange them for gold.

But the formidable team of Christian Berge failed to do anything with the uncompromising Russians and suffered a sensational defeat - 22:23.

The key to success was the perfect, in contrast to the first meeting, actions in defense.

Domestic handball players played together for the whole hour.

In their own half of the court, they did not leave free space for the opponent's stars and quickly blocked all approaches to the goal.

Separately, it is necessary to single out Dmitry Santalov, who led the actions of partners in the destruction.

If he does not shine in Bags Brest yet, then he looks very worthy in the national team.

The Russians did not flinch even in the end, when the Norwegians went for broke and in full force staged a final assault.

And Alexander Kotov's miracle goal at the end of the first half became a real decoration of the confrontation. The attack began with Zhitnikov's magnificent solo pass from the center of the site. Once under close guardianship, the point guard managed to complete the transfer back to his partner. It was not easy for him to throw, because there was a defender right in front of him. But Kotov, in a jump, turned around his own axis and, with his back to the goal, sent a projectile into the far corner with his right hand. Russia shortly before the break came off in the long run - 12:10.

This moment is significant in many ways.

In the match against the favorite, Petkovic's wards didn't keep quiet and didn't close in their own half, but tried to play on an equal footing.

And often they managed to confuse the Scandinavians.

Dmitry led the entire game of the team: he threw himself, gave accurate passes to his partners and worked out in defense.

Kosorotov’s game didn’t go at all, who scored only once and did not convert two penalties, but an experienced partner took over his role, who upset his opponent seven times.

Unfortunately, before the decisive meeting in the group with Slovakia, the Russian team was diagnosed with a coronavirus.

First, Evgeny Dzemin passed a positive test, and right on the day of the game, Andrey Vereshchagin and Daniil Shishkarev.

If the loss of the first two the team should have easily survived, then the absence of the last was a blow.

The right winger is one of the most experienced players in the team and deservedly wears the captain's armband.

And without him it is already impossible to imagine the team.

For example, in the opening match with Lithuania, he scored seven goals and, according to this indicator, lost only to Kosorotov.

Petkovic faced serious personnel problems even before the start of the tournament.

Due to various injuries, Alexander Shkurinsky, Sergey Ivanov, Vyacheslav Kasatkin, Dmitry Kiselev and Sergey Kudinov did not go to the European Championship.

The absence of the left welterweight “Nantes” Shkurinsky, who continues to recover after the break of the “crosses”, was especially upsetting.

And Chartres point guard Kudinov suffered a heel injury in the first friendly match before the Euro with the Croats.

Confident point in the preliminary stage

So, the match with Slovakia turned into a difficult test for Russia.

On the one hand, the hosts have never had enough stars from the sky in major tournaments and have never gone beyond the preliminary stage at the continental championship.

On the other hand, at home they could well have presented a surprise, given the loss of Shishkarev.

In order not to lose the chance to continue the struggle, they needed a victory.

A little later, Lithuanians and Norwegians were supposed to take to the floor.

It was impossible to exclude the option in which three teams at once would score six points each.

Fortunately, there was no need to calculate additional indicators.

The domestic team, despite the absence of the captain, won a confident victory in the class - 36:27.

This time, unlike the confrontation with Lithuania, she did not stop playing after the first half.

The opponents went to the break with the advantage of the guests by ten goals - 19:9.

In the second half, the Russians did not slow down, although the opponent slightly reduced the gap.

But it was not possible to get more than eight points.

Once again, Kosorotov showed himself from the best side, distinguished himself seven times.

So, Petkovic's wards pleasantly surprised already at the stage of the preliminary stage.

They scored one hundred percent of the points and advanced from the first place in the group.

And a sensational victory over Norway provided them with the most important two points in the main round, where Spain, Sweden, Germany and Poland will become Russia's rivals.

It is possible that these points will help the team compete for getting into the semi-finals.