A five-minute suspension was decisive when Skellefteå defeated Frölunda 5-2 and went past the Gothenburg team at the top of the table. Västerbotten scored three goals in five minutes - even though it was their own defender Petter Granberg who had to leave the field. 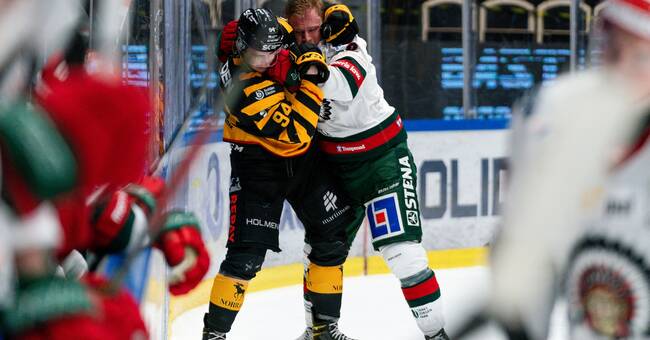 We get a golden opportunity to get into the match.

Instead, it will be the other way around.

Frölunda started the match clearly the best and Skellefteå had only had one shot on goal when defender Adam Wilsby after seven minutes pushed in 1-0 after a pass straight through the box from Linus Lindström.

A not entirely logical management goal.

But it was the middle period that will be long forgotten.

Then both the one and the other happened, which are rarely seen on an ice hockey rink.

First an elbow tackle by home defender Petter Granberg who put Frölunda's young Simon Edvinsson out of playable condition for the rest of the match.

Aim in both directions

The five-minute suspension would give Frölunda a ticket into the match.

Instead, Skellefteå scored three goals, Frölunda one, before the team once again had a full team on the ice.

They offer us good positions and we may have to play four against five in the future, says Skellefteå's Jonathan Johnson to C More.

Back after a covid break, Johnson scored one of Skellefteå's goals during the crazy mid-period when he came free with Frölunda goalkeeper Matt Tomkins and put the puck safely in the net to 3-1.

Skellefteå's first goal in the numerical disadvantage was scored by Albin Sundsvik after Tom Kühnhackl broke a Frölunda play.

Johan Sundström reduced the home lead before Joakim Lindström increased to 4-1 to Skellefteå.

Then Tomkins got enough in the Frölunda goal and was replaced by Niklas Rubin.

Frölunda was also hit by a match penalty at the end of the second period when defender Andreas Borgman had to leave the ice after a violent tackle on Tom Kühnhackl.

But as effective as Skellefteå has been with one man less, just as inefficient was the team when you got the chance to play five against four for five minutes.

The 5-1 goal came instead at the beginning of the third period through defender Jonathan Pudas from the blue line.

The match was the third between the teams this season.

By far the strangest, and the first where Skellefteå took points.

Now the team took all three points and went past Frölunda up to third place in the limping SHL table.