The Abu Dhabi Sports Council revealed the tracks, sponsors and shirts for the fourth edition of the Emirates Tour, which will be held from February 20 to 26, with the participation of 20 professional international teams and the world’s elite riders. A press release said: “The Emirates Tour is the only global race, in the Sharq region. 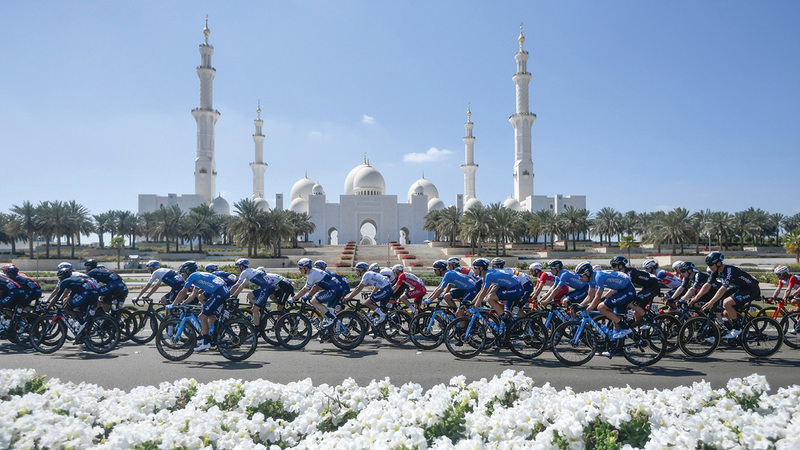 It kicks off February 20 through 7 stages... and "Abu Dhabi Sports" reveals the details of the tracks, shirts and sponsors

The Emirates Tour represents the opening round of the 2022 season

The Abu Dhabi Sports Council revealed the tracks, sponsors and shirts for the fourth edition of the Emirates Tour, which will be held from February 20 to 26, with the participation of 20 international professional teams and the world's elite cyclists.

A press release said: "The UAE Tour is the only global race in the Middle East, and represents the opening round of the 2022 season, within the UCI's agenda, as the fourth edition comes as a continuation of the successes of the first three editions of the global event, which is being organized Abu Dhabi Sports Council.

The announcement of the tracks and shirts of the new version came in a press conference held yesterday, at Abu Dhabi Sports Channel - the official carrier for all stages - in the presence of the Secretary-General of the Abu Dhabi Sports Council, Aref Al-Awani, the head of the Communication and Media Department of the International Holding Company Ahmed Ibrahim, and the Director of Business and Projects at Abu Dhabi Aviation. Hashem Al-Hashemi, and via video communication technology, the President of the Italian Trade Agency, Carlo Vera, and the Managing Director of Nakheel Mohammed Al-Qasim.

The fourth edition of the circumnavigation, with a total distance of 1,081 kilometers, will be held in 7 stages, representing a diverse mix of different terrain available for the specializations of all riders, including 4 speed stages, two mountain stages, and a race against the clock, and the race passes on the most important landmarks of the country and its geographical and natural terrain One of the biggest sporting events in the world.

The fourth edition will witness a special event, by holding the circumambulation in conjunction with the activities of Expo 2020, which will continue until March 31, when the Expo will host the beginning and end of the sixth phase of the circumambulation.

The circumambulation starts with the first phase, “Al Ain Water Phase, for a distance of 185 km, from Madinat Zayed in the Al Dhafra region. The second phase begins (the International Holding Company phase), with a distance of 187 km from Al Hudayriat Island in the capital, Abu Dhabi, and heading to Yas Island, then Al Raha Beach, passing through a mosque. Sheikh Zayed the Great, Al Wathba, Khalifa City, then Yas Marina Circuit, Saadiyat Island, the Corniche, all the way to the finish line in the Breakwaters area on Abu Dhabi Corniche.

The third stage (stage G42 - Ajman) will be held in a race against the clock for a distance of 9 km, which is a speed stage across the roads of the Emirate of Ajman, as each cyclist seeks during this stage to achieve the fastest time within the specified distance for the stage.

As for the fifth stage (the Marjan Island stage), which is held for a distance of 197 km, it starts from Ras Al Khaimah, heading to Umm Al Quwain, then across the desert again to reach Al Marjan Island in Ras Al Khaimah. It is also a speed stage, on straight and paved roads, but it is characterized by the impact of Wind in the riders.

The Emirates Tour writes a new chapter of its uniqueness with the establishment of the sixth stage (the Dubai Expo 2020 stage), which has a distance of 186 km, and starts from inside the Expo, passing through a number of the most prominent landmarks that characterize Dubai, and the Maidan, and back to the heart of the city via Jumeirah Street and Island The Palm, and then return again to the headquarters of "Expo Dubai 2020".

The tour concludes with the seventh and final stage (the Mubadala stage) - the national partner, for a distance of 148 km, which is the second most difficult stage of the race. The race is up to 10% and the average gradient is 5.4%.

For his part, Aref Al-Awani said: “The Emirates Tour has become a prestigious sport brand among the major events in the world, and has been able to multiply the successes and gains every year, and has contributed to achieving important societal impacts on different groups and generations, until cycling has become one of the important and attendance sports. And the wide spread in society in recent years, which enhances the quality of life index and supports a healthy and sports lifestyle among all groups and segments of society.”

The official race jerseys will be provided by the Italian brand Alli, which includes high-tech comfort for the riders.

The red shirt, (sponsored by the International Holding Company), is the leader in the general ranking of the circumnavigation in time, starting from the second stage, and in light of the results of the first stage, while the green shirt (the Italian Trade Agency stage) is allocated to the leader of the circumnavigation with points, while the white shirt (sponsored by Nakheel) It was designated for the best young rider under the age of 23, while the black shirt (sponsored by Abu Dhabi Aviation) was allocated to the leader in the fast-medium stages.