China News Service, Beijing, January 16 (Reporter Du Yan) Today, the reporter learned from the Beijing State-owned Assets Company that the first full-process and all-element exercise was carried out on the stage of the Yanqing Winter Paralympic Awards Plaza, which marked the Yanqing Winter Paralympics. The award plaza stage is ready for the competition, which means that Beijing Olympic Group has 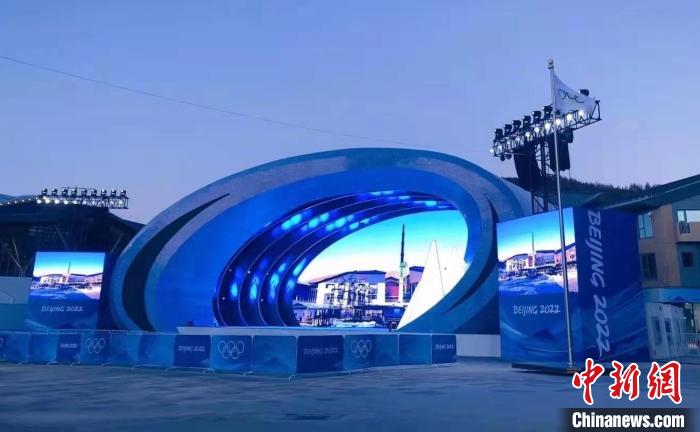 The two Olympics are equally exciting

The Yanqing Winter Paralympic Awards Plaza is located in the International Pavilion of Yanqing Expo Park.

The stage of the Yanqing Winter Paralympic Awards Plaza is named after the "Tree of Life". The stage is used as a carrier for the presentation of the award ceremony and performance, incorporating design elements such as the Great Wall and ice and snow culture. The main scene is the towering tree in the ice and snow, and the shape of snowflakes is used. For decoration, the ice trees transformed by ice and snow form crystal clear snowflakes, which fully reflects the tenacious vitality of the Winter Paralympic athletes "growing" in the snow, and praises the tenacious, hard-working and endless sports spirit of life.

In response to the special requirements of disabled athletes, the Yanqing Winter Paralympic Awards Plaza Stage aims to provide athletes with convenient, fast, accurate and meticulous services, has created barrier-free ramps, and optimized various service processes to ensure that "the same Wonderful".

The whole process guarantees the delivery of the awards stage

In the stage planning stage, the group actively recruited professional teams from all walks of life, organized on-the-spot surveys and planning seminars for many times. The planning and design are based on the promotion of the Olympic spirit and the concept of "jointly building a community with a shared future for mankind", highlighting the characteristics of Chinese culture, combining local environment and After repeated deliberation on the characteristics of the competition project, a planning plan was finally formed that organically integrates the overall shape of the three-site stage with the surrounding environment.

The stage of the Beijing Awards Plaza is named after "Beauty, Beauty and Communion", which carries the sincerity of welcoming guests from all over the world to celebrate the Spring Festival, in order to realize the beautiful meaning of beauty, beauty and harmony, and harmony and symbiosis.

Zhangjiakou Award Plaza is named after "Passion for Dreams". Its design concept combines the graceful posture of skiing and the shape of snow-capped mountains, showing the quietness and purity of snow and the agility and activity of athletes in the movement and stillness.

The award ceremony presents the moment of glory on the field

The award plaza is an important cultural feature that distinguishes the Winter Olympics from the Summer Olympics.

Immediately after the Summer Olympic Games, an award ceremony will be held for the winning athletes at the competition venue.

After the Winter Olympic Games, the ceremony of awarding souvenirs is usually held in the stadium, and then comes to the award plaza specially set up for the Winter Olympic Games to hold a grand award ceremony for the winning athletes, award medals to the winning athletes, and raise the national flag. , play the national anthem.

At that time, the Olympic Broadcasting Service (OBS) will broadcast the awards ceremony globally.

As the core display platform in the award ceremony, the award plaza stage will show the glorious moments of athletes in the Winter Olympics.