Shcherbakova as an angel and Valieva's "Avatar": what surprised the figure skaters' demonstration performances at the European Championship

The European Figure Skating Championship in Tallinn ended with demonstration performances of the best participants of the tournament. Anna Shcherbakova performed a beautiful number to the song Ave Maria in a dress with luminous wings. Maurice Kvitelashvili returned to the image of the genie from Aladdin. He was called on the ice by Kamila Valieva, who herself then performed to the music from the film Avatar. Alexandra Boikova tried on the role of Marilyn Monroe, who congratulated John F. Kennedy, played by Dmitry Kozlovsky, on his birthday. 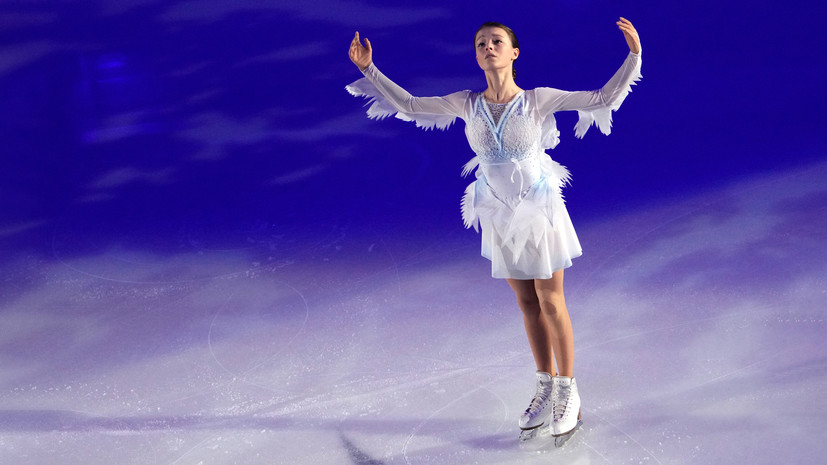 To all the achievements of Russian skaters at the European Championships in Tallinn, one more thing could be added - not entirely serious, but pleasant for season ticket holders for this tournament. All six singles and six duets became participants in demonstration performances, which usually include the six best participants in each discipline, as well as athletes invited by the organizers.

According to the sports principle, however, not all representatives of the Russian team were selected. Dancers Diana Davis and Gleb Smolkin took seventh place at their debut European Championships and were supposed to watch the gala evening from the stands, but the COVID-19 outbreak in the Italian team intervened. Bronze medalists Charlene Gignard and Marco Fabbri did not go out on the ice, as their coach Barbara Fusar-Poli had previously tested positive for coronavirus. So the organizers offered Davis, who was celebrating her 19th birthday, and Smolkin to perform in front of the Estonian public again, and right away in the second part, where the winners of the competitions usually get.

Evgeny Semenenko was the first Russian to please the fans.

In his performance to the songs of the K-pop group Tomorrow X Together, he even performed a triple axel, which he did not do well at this European Championship.

Then the bronze medalist Alexandra Trusova appeared on the ice.

She did not try to perform quadruple jumps, which she needed so much the day before, but simply pleased with her signature number in the form of Wonder Woman.

The dancers Evgenia Lopareva and Joffre Brissot distinguished themselves with the first eccentric performance.

First, they appeared in the form of pensioners who slowly danced to the famous song La Vie En Rose performed by Edith Piaf.

But at one point, the old men looked younger and began to wind up the stands under I Like To Move It.

But not for long - at the end, Brissot artistically showed how, due to incendiary movements, his sciatica worsened.

The production of Alexandra Boikova and Dmitry Kozlovsky turned out to be very original.

The partner acted as ex-US President John F. Kennedy, and the partner in the image of Marilyn Monroe, who congratulated the politician with an overly sensual performance of the song Happy Birthday To You.

Boikova not only “sang”, but also performed the “pencil” rotation in front of Kozlovsky, which is usually included in the arsenal of single skaters.

In the second part, after the dance of Davis and Smolkin, who remembered their last year's program "Cats-Aristocrats", Kamila Valieva unexpectedly appeared on the ice.

The time had not yet come for the champions to perform, but, as it turned out, she needed to call the genie - Maurice Kvitelashvili.

He again performed in the image of the cartoon character Aladdin, which the audience loved, for the creation of which the Georgian figure skater has to paint his body blue every time.

Anna Shcherbakova made a weighty bid to be considered European champion in exhibition performances. The silver medalist took Ave Maria performed by Dimash Kudaibergen as the musical theme for the new number and appeared before the public in an unusual white dress with feathers. It looked rather strange for a girl who prefers a more strict wardrobe, but it soon became clear why Shcherbakova chose it - with a slight movement, she made herself angel wings, which began to glow beautifully in the dark.

Following her, dancers Olivia Smart and Adrian Diaz said hello to Gabriele Papadakis and Guillaume Sizeron, who missed the tournament. Until recently, the French surprised everyone with their rhythm dance in the style of aerobics, and now this idea has been picked up and developed by the Spanish duet, not limited by the requirements of the judges. The performance of Smart and Diaz under Maniac turned out to be almost the brightest of the day.

The evening ended with performances by all European champions.

Anastasia Mishina and Alexander Gallyamov reproduced their original number, in which the partner portrays a rock star, and the partner is a fan unrequitedly in love with him.

Victoria Sinitsina and Nikita Katsalapov did not refuse the opportunity to speak, despite all the talk about their partner's health problems.

The last to enter the ice was Kamila Valieva with a number based on the Avatar motif.

The best skaters in Europe briefly said goodbye to the fans in order to next go on the ice in Beijing at the Olympic Games.