Lucas Raymond back in the goal protocol

December 1 was the last time Lucas Raymond scored. But in tonight's match against Buffalo, this autumn's successful players struck - after 14 goalless matches. The Swedish nineteen-year-old is the best scorer of all rookies in the NHL. 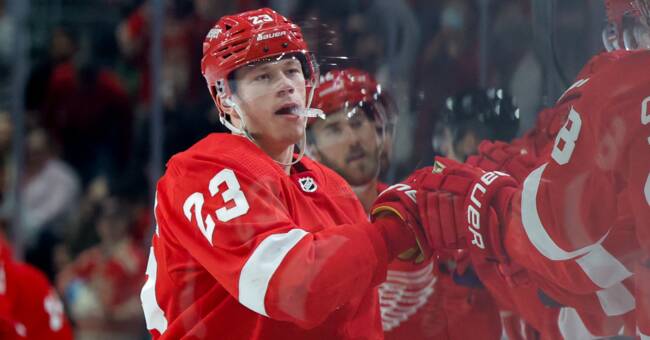 Lucas Raymond managed the pass from Dylan Larkin and was able to push in 3-0 to his Detroit who won the match 4-0.

Lucas Raymond also provided an assist in the match.

Two new points collected means 32 in total during his debut season in the NHL, which means that he tops the rookie league before Trevor Zegras (29).

The goal was the Swede's first after going goalless in the last fourteen.

Purposeful when Florida won against Columbus

Gustav Nyquist ended up in the points record for losing Columbus.

He scored a goal in powerplay and assisted Boone Jenner when he scored the team's second consolation goal in the middle of the third period.

Patric Hörnqvist was noted for an assist Florida leads the league on 57 points and has won the last six home games by at least a three-goal margin, writes the news agency AP.

Boston made a similar achievement last season, but before that you have to go back all the way to the 1995-96 season when Philadelphia had such a winning parade.

The night's nutritious NHL round otherwise offered a number of Swedish points.

Rangers won, 3-2, in what was the Flyers' seventh straight loss.