Double Öberg on the podium at the start of the hunt

The Olympics are fast approaching. Then several Swedes showed good form in the hunt start in Ruhpolding. In Sunday's hunt start, both Elvira and Hanna Öberg ended up on the podium behind Norwegian Marte Olsbu Röiseland. 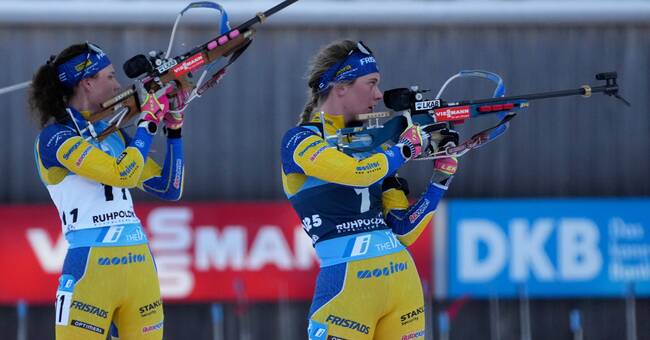 There were different conditions for the Öberg sisters.

After the victory in the sprint earlier this week, Elvira Öberg had to start first while Hanna Öberg went out as the eleventh skier in the hunt start.

The Swedish trio followed each other in the track and all three shot full during their first two visits to the shooting range.

This meant that everyone advanced in the results list and before the penultimate shoot, there were four Swedes placed in the top seven - with Hanna Öberg as second behind Norwegian Marte Olsbu Röiseland.

Hanna puts them on and that was important.

You get some old vibes from Hanna.

Elvira Öberg had started with two penalty rounds during the first half of the race and had nothing to do with the victory.

Hanna Öberg, who missed a shot in the last shooter, did not have it either in the end.

Marte Olsbu Röiseland won after the Norwegian was faultless on the shooting range.

Linn Persson in turn took her best position for the season when she finished fifth.

Mona Brorsson finished eleven and Anna Magnusson went into the finish as the fifteenth skier.