Russian Mark Kondratyuk won gold at the European Figure Skating Championships in Tallinn. He won the free skate and scored a total of 286.56 points, placing fourth in the world this season. Second place was taken by Italian Daniel Grassl, bronze was won by Latvian Denis Vasiliev. Andrey Mozalev and Evgeny Semenenko fell out of the top three due to numerous mistakes. 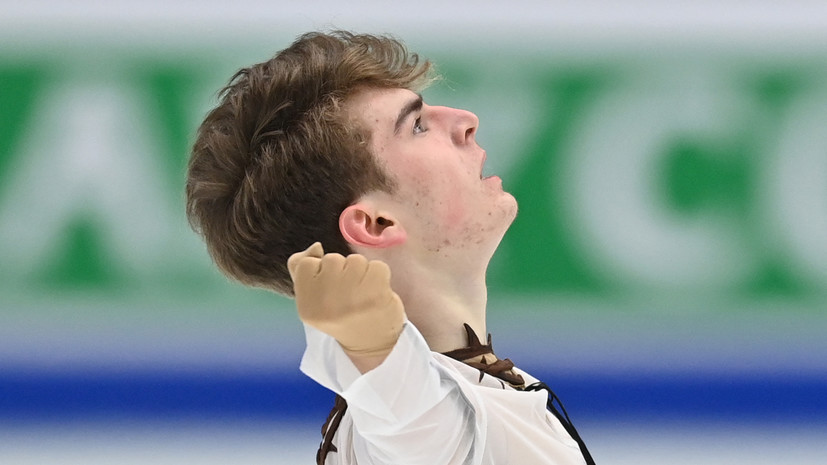 Before the start of the European Figure Skating Championships in Tallinn, one could hardly imagine that not only girls and couples, but also men would fight for a completely Russian podium.

It was especially hard to believe this when Mikhail Kolyada was forced to withdraw from the competition - for all his instability, the most productive single skater on the continent this season.

If the vice-champion of the country did not have an injury, he would definitely claim a medal.

But the results of the short program pleasantly surprised the Russian fans.

Each of them is now 18 years old, and they did not find the time when domestic figure skaters played European Championship medals only among themselves.

The last time Alexei Yagudin, Evgeni Plushenko and Alexei Urmanov succeeded in this was in 1999.

In the results of the Russians on the first day of the European Championship, it was worth highlighting two points that were of great importance before the free program.

Firstly, they have not identified a clear leader in their company.

The gap between Mozalev and Semenenko was only 0.72 points - with the current refereeing system, there has never been such a tight fight at the European Championships.

Kondratyuk was ahead of Semenenko by two hundredths of a point.

Secondly, all three secured a pretty decent lead over fourth place, which was taken by Georgian Maurice Kvitelashvili, who also played for Russia in the past.

The student of Eteri Tutberidze lost more than six points to everyone, leaving a small reserve for former compatriots.

However, during the free program, it turned out that the main threat to the Russian podium was not Kvitelashvili, but the Italian Daniel Grassl. He boasted the widest range of difficult jumps, with which you can claim a lot, if all of them are cleanly executed. He had not been able to assemble the rental into a single whole before, but in Tallinn Grassl made a personal breakthrough. Quadruple lutz, flip and rittberger in the combination brought him 274.48 points in two days. The Latvian Denis Vasilyev scored almost the same solid amount - his result was 272.08 points.

Both of these scores exceeded the official personal records of all three Russians, so in order to take away a medal from Tallinn, and with it a guaranteed ticket to the Beijing Olympics, it was also necessary to show something beyond. Semenenko was the first to try to do this with his program to the music from The Master and Margarita.

A student of Alexei Mishin reworked the beginning a bit and complicated the starting cascade with a quadruple sheepskin coat, which was a good sign - Semenenko did not have such an element at the Russian Championship due to a fall. But then the skater suddenly flunked the salchow with only two rotations. The rental immediately crumbled - followed by a careless quadruple sheepskin coat and an under-rotation on the triple axel. Semenenko never managed to pull himself together until the end of the program. He received a modest 160.96 points for his performance and with a total of 260.00 he was behind Vasilyev in an intermediate third place.

The next on the ice was Kondratyuk with a completely opposite program in its mood and content to the tunes from the musical "Jesus Christ Superstar". It turned out to be dissimilar in its quality. The student of Svetlana Sokolovskaya was visibly worried when he entered the starting quadruple toe loop and two triple axels, but he coped with each of them.

At the same time, it was much more important for Kondratyuk to perform two quadruple salchows in the second half of the program, which create the basis for its rather high base cost.

It was again noticeable how hard these jumps are given to him, but the Russian champion did not flinch and wrote them down as an asset.

Although he was slightly behind Grassl in the technical score, the judges rewarded him with the most generous components of his career.

Kondratyuk scored a total of 286.56 points - only the Americans Nathan Chen and Vincent Zhou, as well as the Japanese Shoma Uno, performed better this season.

The Russian team got another gold medal at the European Championships in Tallinn, but its specific owner has not yet been known.

One mistake on the salchow provoked a series of new blots and negligence, due to which it became impossible to count on a medal.

The most offensive for Mozalev was that he was credited with that salchow as a triple with underrotation.

He could no longer repeat this jump, but he automatically closed his last cascade with it, which left him without extra points.

The total amount of student Kirill Davydenko was 265.69 points.

He took an offensive fourth place, losing to Kondratyuk, Grassl and Vasiliev.

But at the same time, the 18-year-old skater again, as in the Russian championship, bypassed Semenenko.

Having lost in the fight for the European championship medal, Mozalev at least confirmed his right to an Olympic ticket.