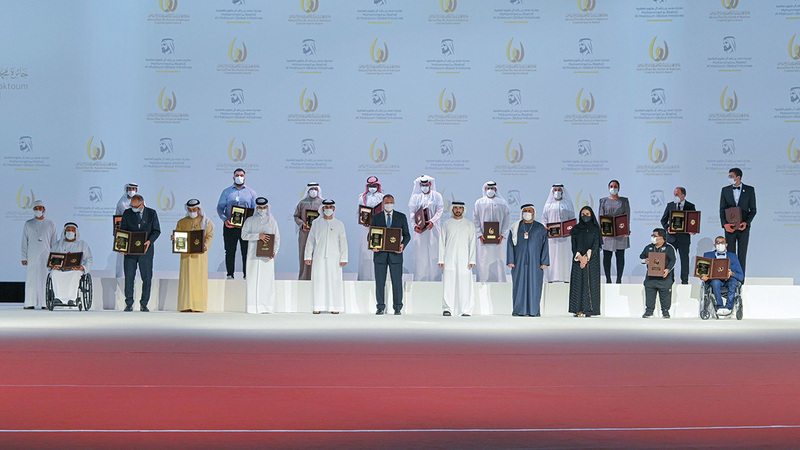 This came during the grand ceremony organized by the "Mohammed bin Rashid Al Maktoum Award for Sports Creativity", yesterday, at the Convention and Exhibition Center at Expo 2020 Dubai, and the Chairman of the Board of Trustees of the "Mohammed bin Rashid Al Maktoum Award for Sports Creativity", Mattar Al Tayer, participated in the honoring. General of the Executive Council of the Government of Dubai Abdullah Al Basti, Director General of the General Directorate of Residency and Foreigners Affairs in Dubai Lieutenant-General Mohammed Al Marri, Director General of the Dubai Government Human Resources Department Abdullah Al Falasi, Secretary General of the Dubai Sports Council Saeed Hareb, and Secretary General of the Supreme Legislation Committee in Dubai Ahmed bin Meshar Al Muhairi The Award’s Secretary General, Moza Al-Marri, members of the Award’s Board of Trustees, a group of heads of national, Arab and international sports clubs and federations, and a number of sports sector officials.

The ceremony began with the playing of the national anthem of the UAE and the screening of a film about the eleventh session of the award, which comes this year in the wake of the celebrations of the golden jubilee of the UAE. The film included statistics about the participants and winners of the award and the presentation of the silver coin issued by the award. Hero” tells the story of the Iraqi Paralympic player Jarrah Nassar, who faced the most difficult challenges since his birth with a physical disability, but insisted on becoming a hero in his homeland and on the world level.

Mahmoud Al-Khatib, Chairman of the Board of Directors of the Egyptian Al-Ahly Club, gave the honoree’s speech, during which he expressed his sincere appreciation for the award and its sponsor, and for the Emirate of Dubai and its wise leadership for the continuous interest, support and encouragement it gives to sports and athletes, stressing that the award bears the name of His Highness Sheikh Mohammed bin Rashid Al Maktoum, Deputy The President, Prime Minister and Ruler of Dubai, raises the value of the award and enhances its objectives aimed at stimulating excellence and creativity in various fields of sports work.

And His Highness Sheikh Hamdan bin Mohammed bin Rashid Al Maktoum honored the winner of the “Arab Foundation” award, which was granted to the “Al-Ahly Club for Physical Sports” from Egypt, and received by Mahmoud Al-Khatib, Chairman of the Club’s Board of Directors, and the winner of the “World Foundation” award from the International Summer Olympic Federations, which The International Handball Federation won the award, and the award was received by Joel DeBlanc, First Vice President of the International Handball Federation.

His Highness, the Crown Prince of Dubai, the sponsor of the award, also honored the winning athletes in the “Local Young Athlete” category, where six young athletes from the UAE from various sports won in recognition of their achievements, who were determined by a vote of the fans through the Dubai Sports Channel and the smart application of the award by 50 percent. %, who numbered 231,216 votes from the masses, in addition to 50% of the jury, and won the first places Saif Jassim Al-Mansoori, the second Muhammad Saeed bin Ham Al-Amri, the third Salwa Ahmed Al-Mansoori, the fourth Yazia Tariq Abdul Salam, and the fifth Rahma Khalfan Al-Murshidi. Sixth place, Yousef Rashid Al-Matrooshi.

The “Arab Sports Personality” category was won by Sheikh Joaan bin Hamad Al Thani, and it was received on his behalf by Jassim bin Rashid Al Buainain, Secretary-General of the Qatar Olympic Committee.

In addition, His Highness Sheikh Mansour bin Mohammed bin Rashid Al Maktoum handed over medals for winning athletes, teams and institutions in the other categories of the award. His Highness honored the winner in the “Local Governance” category, Ahmed Mohammed Al Hammadi, and in the “Local Coach” category, which was won by both : Abdulaziz Muhammad Al-Yasi, Abdul Hamid Ibrahim Al Hosani, the “Arab Administrator” category won by Aya Mahmoud Madani from Egypt, the “Distinguished Local Athlete” category won by Zayed Abdul Nasser Al Kathiri, and the “Arab Athlete” category awarded to young Arab athletes who excelled in the Olympic Games 2020, which was held in exceptional circumstances, and achieved outstanding results, Ahmed Ayoub Hafnawi from Tunisia, and Tariq Ali Hamdi from Saudi Arabia.

His Highness also honored the winner of the “Athlete who has achieved a high level achievement” category, which was awarded to Maan Abdul Moeen Asaad from Syria, and the winners in the “Athlete who achieved achievement in difficult circumstances and challenges for people of determination” category, which was awarded equally to two athletes who excelled in the Tokyo 2020 Paralympic Games: Walid Katila From Tunisia, and Jarrah Nassar from Iraq, and in the “Arab team” category, the Algerian football team won, and the award was received by Hakim Madan, a member of the Executive Office of the Algerian Football Association.

• Mansour bin Mohammed honored a number of winners, strategic partners and the award's board of trustees.

• Innovators from the UAE, the Arab region and the world crown their bid by winning the largest sports award in the world.

• Honoring in the 11th session of the award included 6 Emirati athletes in the “Local Young Athlete” category.

• Al-Ahly Club of Egypt is crowned with the "Arab Foundation" award.

And the award of the "World Foundation" goes to the International Handball Federation.

Al-Anbari: The award is a great incentive for athletes

National coach Abdulaziz Al-Anbari, winner of the local coach category, thanked the wise leadership for the continuous initiatives in honoring the citizens of the country in general and athletes in particular.

Al-Anbari also thanked the Sharjah players and the support of the club's management, who contributed - according to his description - during the previous period he spent with the "king" in winning the award.

Al-Anbari said in a press statement: "The award is a great incentive for any athlete, and it means a lot to me on a personal level, to provide the best for this generous country and Emirati sports in various fields."

Regarding his near return to the stadiums and the world of training, Al-Anbari added: "There have already been contacts in the recent period by the Khorfakkan administration, but I prefer now to complete the training course that I am attending, and with the end of it, we can talk about determining my next destination."