Nepryaeva's victory, Terentyev's fall and Bolshunov's bad luck: how was the fourth stage of the Tour de Ski

As part of the fourth stage of the Tour de Ski, sprint races took place in Oberstdorf. In women, Natalya Nepryaeva won, and this success helped her to lead the overall standings of the prestigious stage race. But the decisive race for men took place without the participation of the Russians. Alexander Terentyev in the semifinals fell on the descent after contact with Johannes Klebo and after the end of the competition blamed the Norwegian for the incident. And Alexander Bolshunov did not have 0.02 seconds to get into the decisive race. 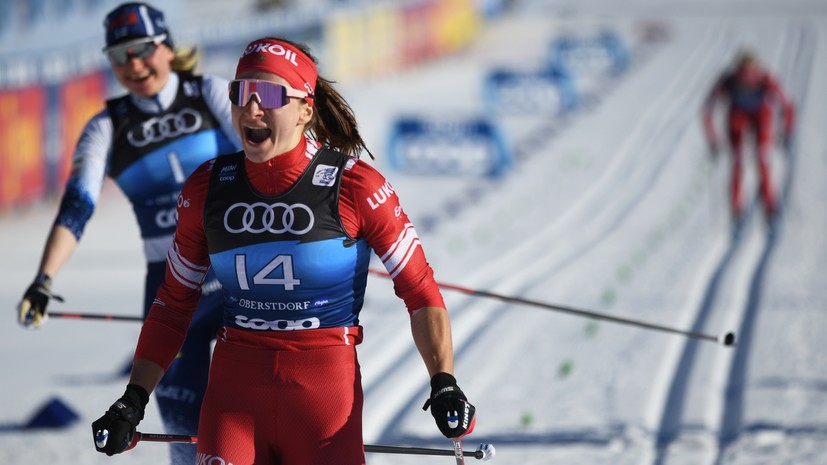 The new year 2022 at the Tour de Ski opened with two sprints. On the eve, the third stage of the race was quite successful for the Russians. Alexander Bolshunov and Tatiana Sorina won medals in the mass start. In the following form, domestic fans were waiting for new awards from the skiers. For men, Bolshunov and Alexander Terentyev were expected to fight for getting on the podium, first of all, and for women - Sorina and Natalya Nepryaeva, who fought for the intermediate first place in the overall standings with Jessica Diggins and Kerttu Niskanen.

In the prologue, the Russian girls did not perform very well - only Nepryaeva, Sorina and Khristina Matsokina made their way to the quarterfinals.

The men looked much more confident.

Terentyev showed the second time, losing only to Johannes Klebo, and Bolshunov - the fifth.

Matsokina dropped out in the quarterfinals, who made an offensive fall at the beginning of her race.

The athlete lost a lot of time and broke a stick - there was no talk of a good result.

Diggins found herself in a similar situation.

In a collision with her, the rules were violated by Frida Karlsson.

For the Swede, this warning was the second, and she was disqualified.

Sorina and Nepryaeva went on.

In the semifinals, the Russians started in one race.

Natalia did not start too quickly in her corporate style, but on the final ascent and at the finish line she did not leave any chances to her rivals.

Tatiana, in a bitter struggle with Johanna Hagström, showed the third result and made her way to the final as a lucky loser.

The decisive sprint made all Russian fans seriously nervous.

At first, Nepryaeva, in the fight against Hagström, Juhanna Matintalo and Anamaria Lampich, did not seek to force events and held on to fourth or fifth places.

Behind her was her teammate.

The last hundreds of meters decided everything again.

In the long climb, Natalya worked incredibly powerfully and went into the turn after the Swede, and at the finish she did not leave her opponent the slightest chance.

After completing the race, Nepryaeva uttered a loud victory cry and embraced Sorina, who showed the sixth time. You can understand the emotions of the skier, because she received several reasons for joy at once. Firstly, she topped the overall standings of the Tour de Ski, 34 seconds ahead of Niskanen, and Diggins - 38. Secondly, she won her first personal gold at the World Cup stages of the year. Finally, for the second time in her career, she managed to get the upper hand in the sprint.

She was important to me, my morale and attitude.

I hope this is not the last podium.

I tried to behave correctly tactically, on such a circle it is unrealistic to run right off the bat.

The feeling of the yellow jersey is wow, but this is not the first time in my career.

The results at the beginning of the season were not what was planned, but now the feeling is returning.

Of course, I would like to raise a large pyramid above my head, but I will not get ahead of myself.

I’ll just do everything in my power, ”Nepryaeva said on Match TV.

But Russian men in the end not only were left without medals, but did not even make it to the final.

It seemed that at least one representative of Russia should be in the decisive race.

Alas, on the first day of the new year, a variety of failures awaited them.

First of all, this concerns Terentyev.

In the quarterfinals, Alexander broke a stick: after contact with the ski of one of the rivals, it flew out of the mount, and the athlete had to literally tear the “paw” off his palm with his teeth and ride with one stick for some time.

Fortunately, this happened almost immediately after the start, and the Russian had time to rectify the situation.

The native of Naryan-Mar demonstrated all his power, on the final climb he jerked to first place, and then finished confidently.

Bolshunov calmly won his race, and Gleb Retivykh made his way to the semifinals from second place.

Such results set up an optimistic mood.

However, then everything turned out not in favor of the Russians.

Bolshunov and Terentyev hit the main favorites of the race - Klebo and his compatriot Eric Valnes.

Thus, the intriguing confrontation with the Norwegians took place one step before the final.

The world champion set a high pace and boldly took the lead.

He managed to hold the first place until the last climb.

Terentyev, at first, saved his strength, but closer to the finish line he got involved in the work.

The 22-year-old athlete managed to stand right behind Klebo's back.

Ahead of them was a face-to-face battle.

Alas, when entering the descent, Alexander made an offensive blot.

He drove a little over the edge of a Scandinavian ski and lost his balance.

After that, the struggle was over for him.

Frustrated Terentyev could hardly restrain his emotions and almost broke sticks to the ground.

Bolshunov, unfortunately, did not have enough strength at the finish - he lost to both Klebo and Valnes.

One could only hope to get into the finals as a lucky loser, but these aspirations were not destined to come true either.

In the second race, Francesco de Fabiani and Kalle Halfvarsson improved the Russian's time by 0.02 seconds.

Zealous forces for his race also did not have, and he finished only sixth.

The final, as expected, was marked by the complete dominance of the Norwegians.

Klebo won a predictable victory ahead of Valnes and Paul Golberg.

The fourth was another representative of Norway, Even Nortug.

It was all the more offensive that the final took place without Bolshunov and a strong sprinter Terentyev.

The latter, after the end of the competition, blamed his opponent for his fall.

“I went downhill, and at the turn, Klebo gave me on skis with the heels of his skis and cut me down.

Yes, he immediately ran away.

There will be no protests.

In the quarterfinals, the Swede knocked out the stick for me - this is rare, but it happens.

Thanks to those who gave me the stick quickly enough, I didn’t even have time to notice who it was, ”the Russian said.