Karlsson before the mass start: Must be ready to adapt

Frida Karlsson has got a tentative start on the Tour de Ski. On Friday, it's time for a new chance in the form of a 10 km mass start in Oberstdorf, Germany. - It will be fun, she says to SVT Sport. 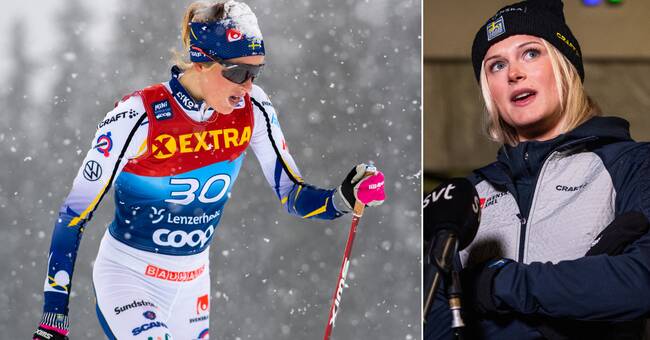 There was a draw already in the qualifiers at Tuesday's sprint and finished fifth in the classic mile on Wednesday.

Now Frida Karlsson is getting ready for the third stage of the Tour de Ski.

- This is not the start I might have hoped for.

Frida Karlsson opened on Wednesday to cancel the tour, something she explains as spontaneous feelings after the race.

- Then there is a certain truth in it.

If it does not feel like the body is responding then there is no meaning.

- We (she and the coach) know the background to why it has gone as it has and we feel safe in it.

On the schedule in the third stage is the mass start in 10 km freestyle in Oberstdorf, Germany - and she is looking forward to it.

- It will be fun to have people around.

Here it is important to think a little differently, says Karlsson.

- It's a bit about how to dispose of your strengths and where to put your energy.

- I think I quite often have clear plans, but it is important to also be ready to adapt.

"Applies to being on the cutting edge"

Countryman Ebba Andersson is also very eager for the first mass start of the season.

- It is important to be on the cutting edge from the start and position yourself in a good way.

That is the key in the beginning and not to get carried away.

Ebba Andersson took the first podium place in the 10 km classic when she finished second.

- It was incredibly nice for me who has been looking for a slightly better feeling than I have had during the competitions I conducted here during the start of the season.

- I hope that I have much more to pick out when it comes to the most.